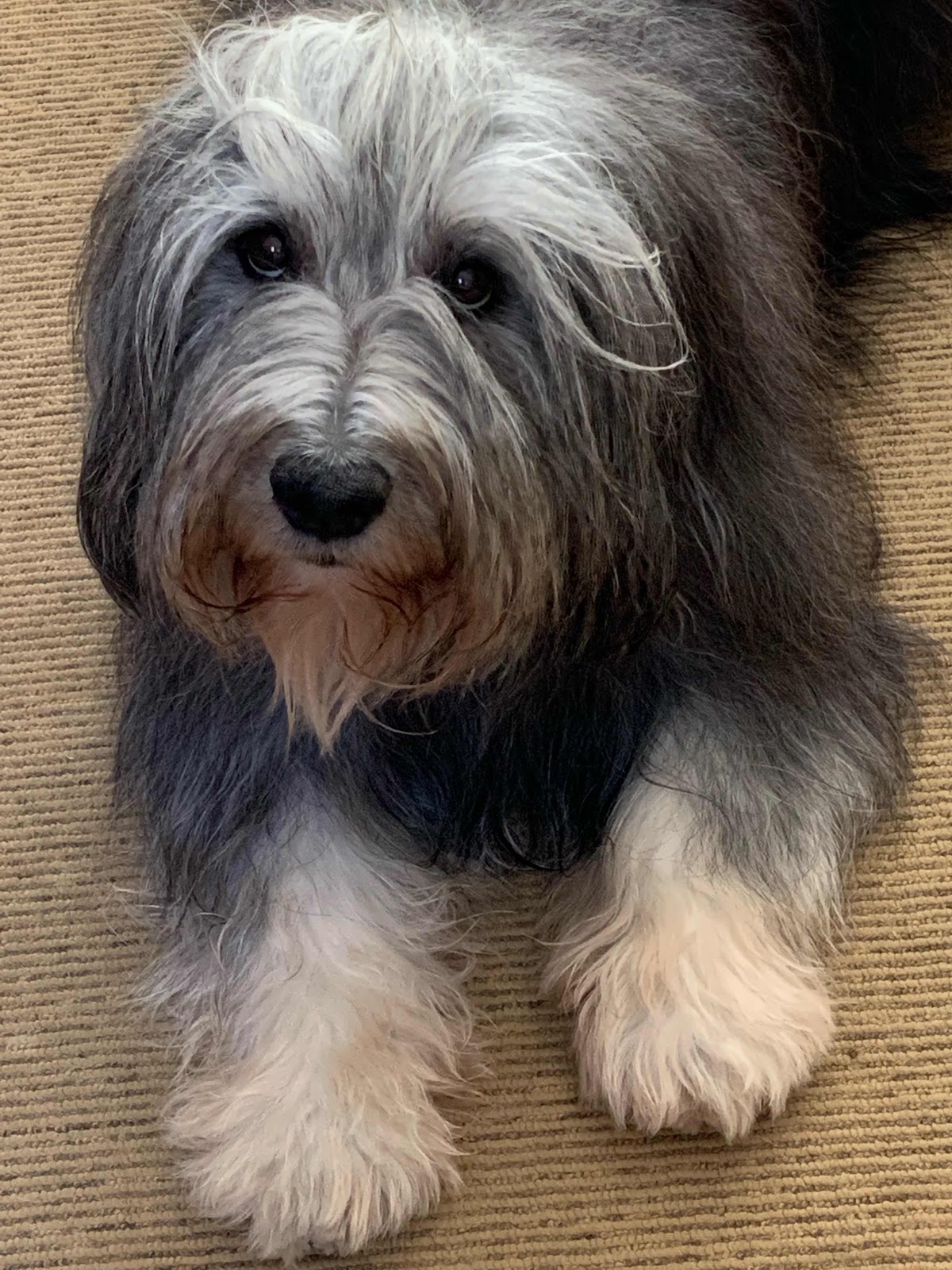 I’m thinking that “the big trip” is coming up soon.  Her highness has been flitting around like a crazy woman- so something is up.

Yesterday, she did that “thing” where she is doing one thing and she goes off to do a totally different task.  And I was in the middle of it.
She had been mumbling for several days that she needed to groom all of us – which is part of the reason I think she is leaving. Heaven forbid the sitter should see what we REALLY look like.  Mind you – she DOES groom us pretty regularly.
Anyway, she was eating her breakfast bagel, and I went to sit next to her and possibly mooch a crumb.  She’s almost done, but she’s reading a magazine and still drinking her coffee.  She puts her hand down to pat me, and as she scratches behind my ear, she suddenly looks at me with horror.  A mat.  You think she had been hit with an electric shock.  Almost as good as finding a tick.  She puts both her hands on my head, and says “Buddy- it’s time.  Now.”   She doesn’t even finish her coffee, jumps up and heads for the grooming torture palace.  The garage.  Of course I LOVE to go in there because it’s where the dog food is stored! But within a flash, she had me on the table.
I think she thought this was going to be a “one mat” job.  But then when she started, she realized I was sporting enough coat to make another dog.  So I got the COMPLETE brush out.  All the time she is plying me with kibble, so I don’t mind ONE bit.  I may be a bunny chaser and I have a few other undesirable traits – but in this household, I am the Grooming King.  I cooperate 1000%.  I think she filled a garbage bag with my hair.  And I ate 6 cups of food.  (I wish.)
Of course, I looked stunning when she was finished.  My feet were all fluffy and nice.  So what did I immediately do?  Started licking them.  Which makes them all knotted.  She looked at me and shouted “stop!”  She’s so dramatic. Rumor has it, Einstein may be the next victim today.
When most people travel, it involves the usual packing and making sure everything is in order.  Like passports, foreign currency and other documents.  When humans have a dog – and a sitter, there are numerous instructions to write, food to organize and treats to replenish.  It MAY be a bit faster if the dog goes to a place called a boarding kennel – but even that requires organizing and packing – for the dog.  But add to that a dog who takes four different epilepsy medications AND a dog who takes cardiac meds – and you have a instruction BOOK – longer than the Bible.  OK maybe not THAT long- but it’s not a short paragraph scribbled on a piece of paper.  There are slso signs everywhere.  Medication signs in the kitchen.  Food signs are hung in both the kitchen AND the garage where our food is kept. It’s crazy.  No wonder she doesn’t travel much.
Well I know she’s not leaving today.  I know she still needs to pick up two of my meds.  Plus – two more dogs need grooming…..Snd they say vacations are relaxing. ..
Have a good one.  Peace and paws up.
Seizure free days: 0 Yup.  Maybe because I figured out she is going…