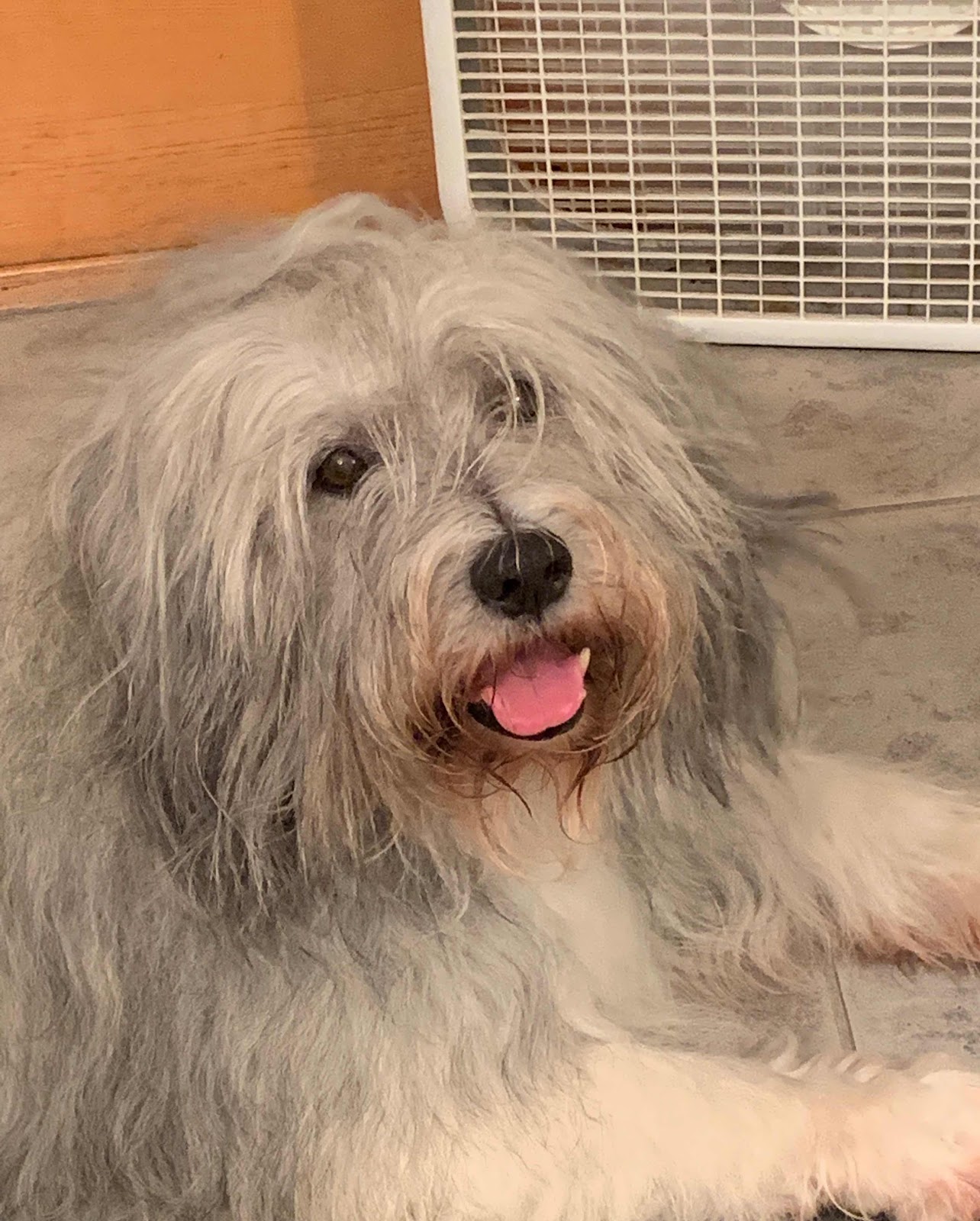 It sure has been hot the last few weeks.  Luckily for us, the lower level of our house is nice and cool.  We canines retreat there whenever we can.  Unless we are sitting right in front of the fan- which is Einstein’s favorite location.

We have actually adapted well to this retirement mode thing. At 6AM we are all pretty much still sleeping.  We have totally forgotten that 4:30AM schedule.  We do like to get out before 7, though, because it’s still relatively cool then.  Relatively.  And the last week or so, when we go out, we have fog in the air.  It burns off pretty quickly.
Yesterday morning Einstein and I did the first walking shift. We haven’t been taking the public trail unless it is windy out.  Which it hasn’t been – that’s why we have fog.  Why the wind requirement for the trail?  The dive bombing vampires have arrived.  The black flies are pretty much gone.  Even the ticks find it too hot- so they apparently aren’t as active.  Who are the dive bombers?  The dreaded deer flies.  The next round of insect pests.  And those guys are partial toward dark colors. So they go after me – and her highness’s head.  They don’t bother Einstein or the FG quite as much. Those guys rival black flies for bites. Plus they like to buzz in you ear.  But their aviation equipment must not work as well in windy weather.  So we pray for wind.
Our walk was warm, but unremarkable.  No neighbors out for Einstein to yell out his greetings to. We came home and it was the FG’s turn.
He and her highness got to the road and he immediately let out the big dog boof.  They were doing some construction on our road the day before yesterday, and they had placed signs on the side of the road.   They left them lying by the side of the road overnight.  The FG, with his keen observational skills, slowly approached the unusual landmark.  He approached, boofed, and cautiously sniffed this strange new thing on HIS road. When he concluded that this piece of wood and metal was hardly dangerous, you know what he did next.  He tried to pee on it.  Her highness moved him along before the spray hit the sign.
They had a good walk and were coming home when her highness spotted something coming out of our driveway and crossing the road.  She firmed  up her grip on the FG’s leash.  She recognized the slow moving shape making its way  across the road.  Yup.  A walking pin cushion.  In broad daylight.  The FG didn’t notice at first and then he spotted it.  He watched intently and her highness must have repeated “leave it” about 67 times. As if he could go anywhere near it while being in the death grip.  He didn’t REALLY care.  He just wanted to watch.  Like he does with the bunnies.
They headed down the driveway and her highness made a note to self that NONE of us can be off leash early in the morning or in the evening.  Clearly the fella that Max encountered is still in the neighborhood.
We had thunderstorms last night. The thunder thankfully doesn’t bother any of us.  That’s because it’s actually hard to hear over Einstein’s barking.
More heat today.  Time to head out on pin cushion patrol.
Have a good one.  Peace and paws up.
Seizure free days: 17