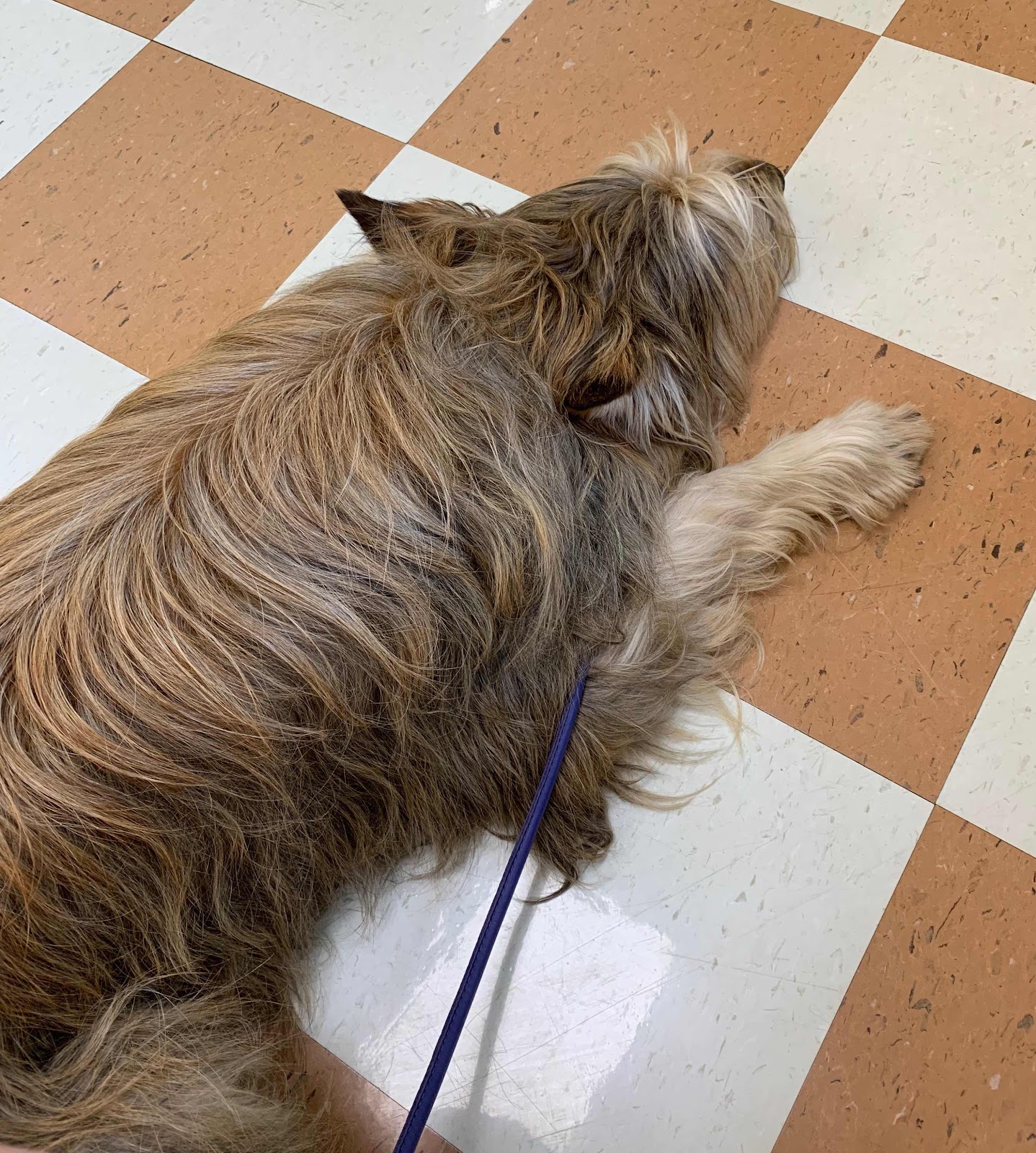 The FG had his visit to the vet the other day to see if he is put together normally.  He had some X-rays of his hips and his elbows.  Einstein did that once too- he passed his tests with flying colors. I never bothered.  I know I’m perfect.

They arrived at the clinic and as they stepped into the waiting area, her highness stopped.  The place was packed.  Lots of Zombies and their dogs. She made the FG sit – and they stayed right by the front door.  She couldn’t figure out how to get through the crowd to her favorite area in the back.  So they stayed by the door.
We know how paranoid she is at the clinic.  She doesn’t want us to lick anything for fear we will catch some communicable disease.  It’s amazing she doesn’t make us wear surgical masks.  Imagine her HORROR when a little dog had ….how can I put this…explosive diarrhea mear the front of the registration desk.  Ewwwwwwwww.  The poor human who owned the dog looked mortified- and who wouldn’t.  A woman who was sitting close to the rancid smelling puddle, stood up and came to hang out by my human and the FG.  She didn’t even have a pet with her.  The man who owned the dog tried in earnest to get the attention of one of the staff who were super busy. He finally mentioned to one that his dog had a little accident.  Little accident?  We’re talking more than a little pee problem.  Thank goodness it had not been a Saint Bernard.  They would have had to shut down the clinic.
They called my human to the desk and she approached it from the side – to avoid the cesspool.  She mentioned to the staff again that there was a “clean up in aisle 3” as no one seemed to be doing anything about it.  They assured her that help was on the way.
They asked that the FG be weighed.  Getting to the scale meant going right around the “problem area.”  She asked if they could go behind the desk- and they quickly agreed.  The aroma was wafting their way – so they realized the problem was dire.  Wonder who lost the coin toss to clean it up.
After the weigh in, my human was able to direct the FG to the seating area in the back. Away from the crowds and the “problem area.”  The FG chilled while waiting to be radiated.
The vet and technician came out to see him and he happily greeted them.  They invited my human back to watch the process.
The FG was extremely well behaved, and didn’t require any sedation. Her highness probably could have used it.
A look at the X-rays revealed that things “look normal” – but now they are sent to the OFA (Orthopedic Foundation of America) for formal assessment.  He didn’t study for the test – so we hope he passes.
After the X-rays were over, as her highness chatted with the vet, a steady stream of technicians came by to meet “the Picard.”  His reputation precedes him.  Not really – I think they just wanted to see a Picard in real life- there are so few around.  He happily greeted each one and reportedly was a great ambassador for the breed. The picture perfect canine. Remember- no carpets in the clinic- and he WAS on a leash.
So within the past couple of weeks, all of us have been to the vet.  Although the staff are very, very nice, my human hopes that we can avoid going there for at least a little while.  Paws crossed!
Have a good one.  Peace and paws up.
Seizure free days: 34