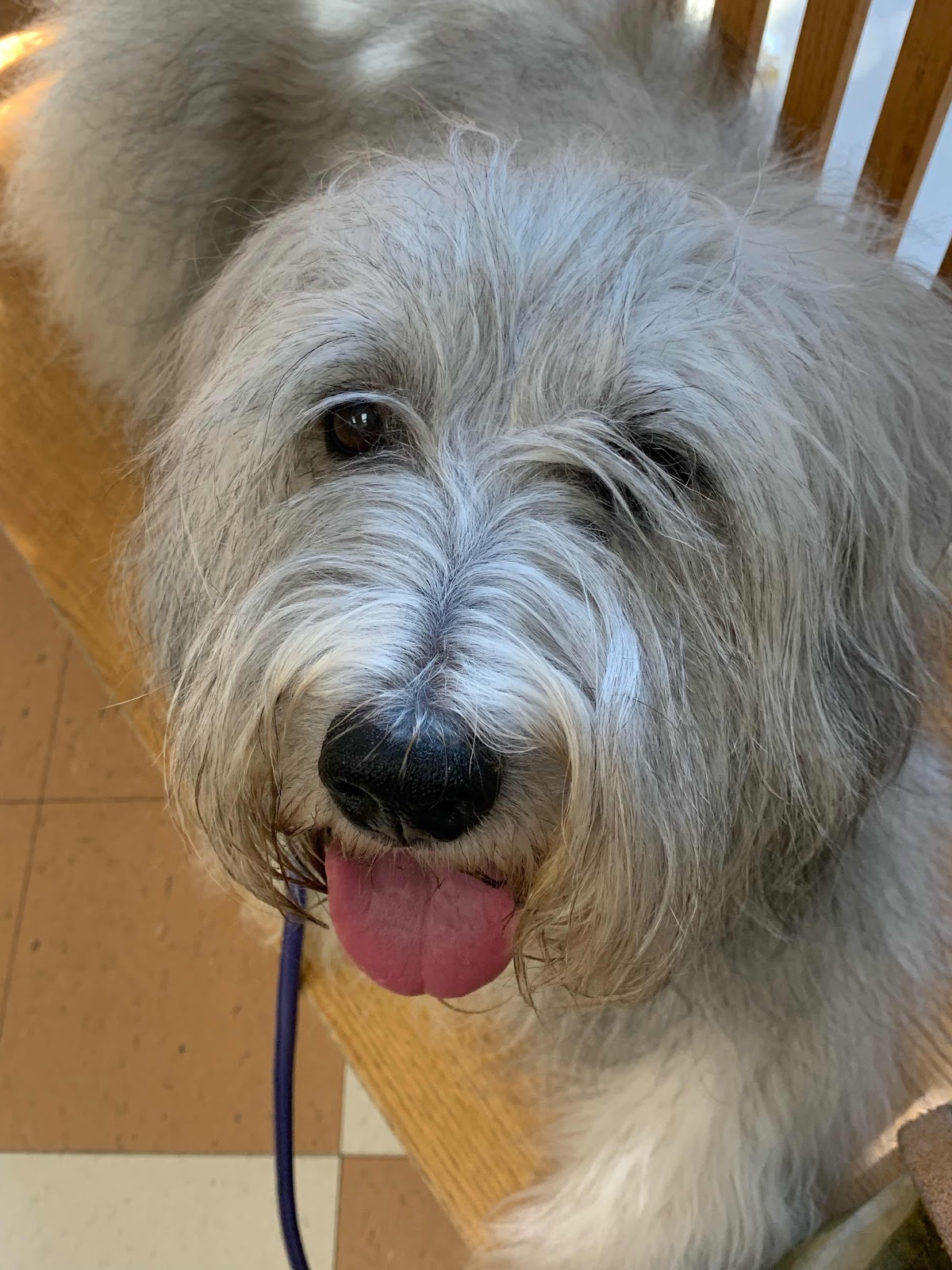 The day of the medical appointments. My human’s? Her lavender injuries will not kill her.  But we knew that.  We might.  But the lavender won’t.

Einstein’s appointment began with the typical vet clinic waiting room circus.  Dogs with zombie owners.  But I hear Einstein’s favorite dog was this one.  He refused to leave when it was time to go. 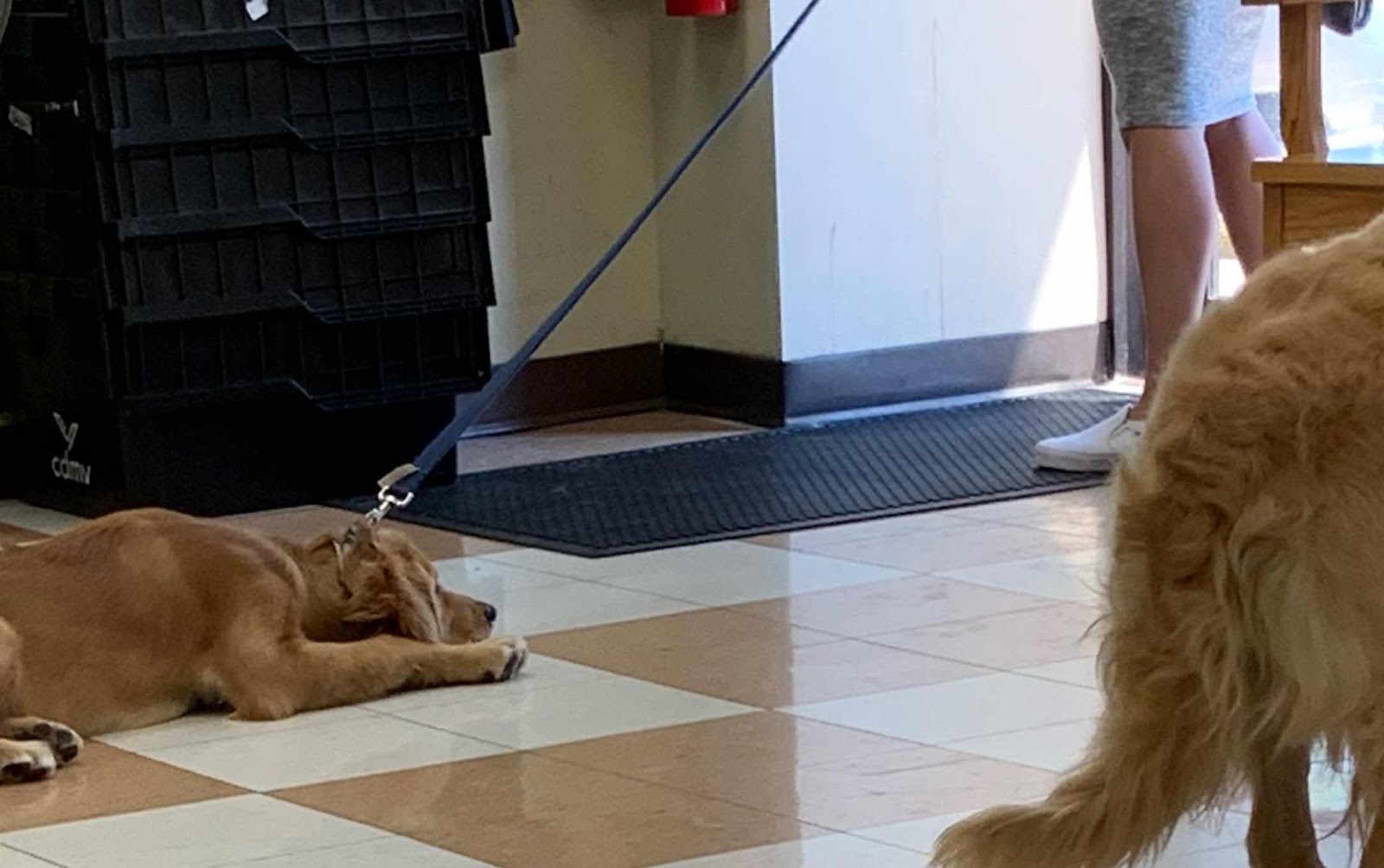 How weird is that?!  Most dogs want to bolt out the door.  But not this guy. He appeared to be a young Golden Retriever.  I think he knew it was too hot outside and he preferred the air conditioned clinic.
Einstein was well behaved for his ultrasound.  Although he apparently did not appreciate his feet being touched.  My human should have warned them.  Not that he is mean or the least bit aggressive- he just recoils his feet and tucks them under his body.  You know how in the movie the Wizard of Oz, when the house falls on the witch and her feet curl up and go under the house?  That’s kind of like Einstein’s feet.  I’m not sure what made me think of that…
Anyway, the cardiologist met with her highness after the tests.  Einstein has two problems.  Neither problem is DCM – the cardiac problem written in the news a lot lately – which has a connection to a grain free diet.  Nope – he has two other problems. One is age related changes seen in many dogs involving his mitral valve.  The other is actually one he was born with -Patent Ductus Arteriosis.  The problem is usually detected when the dog is a puppy.  Severe cases warrant surgical repair.  Now it is most likely the Einstein’s case was not severe at birth -that’s why it was never detected and why it has never affected him.
So- the bottom line.  He is NOT in heart failure.  He shows no external symptoms of heart issues.  Given that and given his age of 9.5, the vet was not pushing for surgery.  He felt that medication, at Einstein’s age is a more reasonable option.  IF he suddenly started showing significant symptoms, it COULD be an option.  But the surgery for the PDA would not help the other problem.  So he would still have that.  So after LOTS of questions and discussion, her highness agreed with the vet’s recommendation. He’ll be picking up his drugs tomorrow.  Our house is starting to look like a pharmacy.
So not GREAT news – but not HORRIBLE news either.  Paws crossed he continues along as he currently is.
Now we know I was recently to the vet for my bloodwork.  Einstein went to the vet and had his cardiac tests.  It seems only fair that the FG get to visit the clinic.  After all, we’ve probably paid for several vets’ vacations.  So today it’s his turn.  He is going in for a check up – and to get some X-rays.  He has nothing broken- we just want to see how he is put together.  Einstein and I wanted to X-ray his head to see why he thinks differently than us PONs.  Her highness said they are not doing his head.  I wish I could go to watch.
More on his tests in coming weeks.  Oh. And more on his appetite for carpets.  Which he apparently still has….
Have a good one. Peace and paws up.
Seizure free days: 32