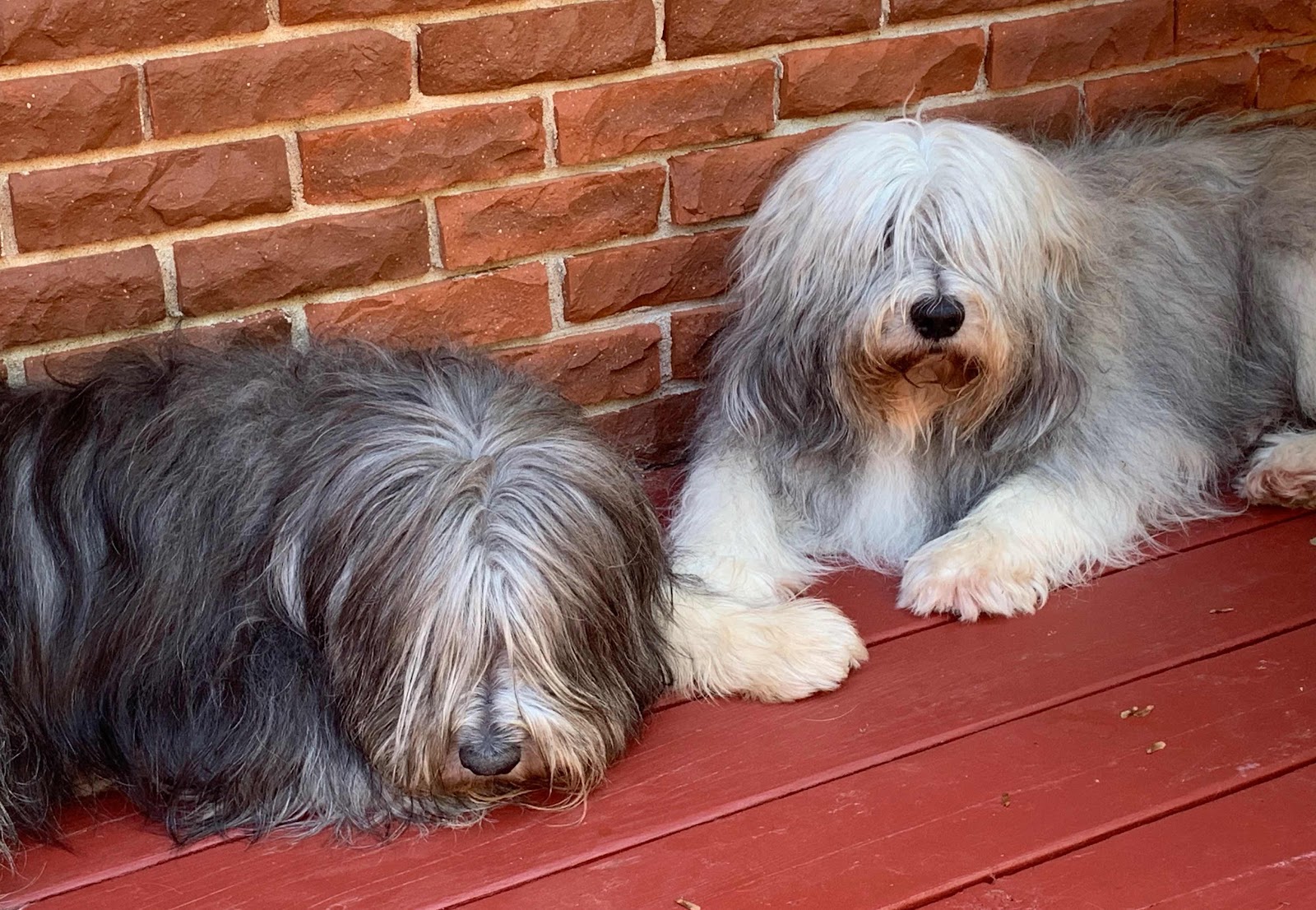 Helpful hint:  When you don’t have enough medical tape, vet wrap will do…
On Sunday, her highness and her sister went to a gardening center. Her sister needed plants.  Her highness didn’t.  So she walked around and took photos and then as she was about to leave, she spotted some lavender.  She has attempted lavender before. But she killed it.  Or thought she did.  Who KNEW that it looks dead at the beginning of the season- but then it comes back to life?  No wonder it never survived.  She always pulled it out, thinking it was dead,  and it was probably alive. Anyway, she bought two pots.  And the plan was to put it in the raised bed in the middle of our driveway.
She left the pots by the front of the house.  As you would expect, when we discovered them, we all tried to “water” them. We were stopped before the faucets opened.
So yesterday morning after our walks and breakfast, her highness headed out to plant the lavender.
They say that lavender has health benefits- including antiseptic and anti-inflammatory properties. Well that is ironic…
Her highness first cut some things with the weed whacker.  Then she battled to get the leaf blower working.  She pulled the cord probably 20 times.  The neighbors could hear her anguished moans – so they shouted out to see if they could help.  My human walked over and after two pulls, the neighbor started the blower.  My human headed back home blowing everything in sight.
She got back, stopped the blower and used the weed whacker again.  After that she again tried the blower.  She came to the conclusion the blower has a PON/Picard engine.  It only works when it FEELS like it. She grasped the cord, gave a tug and when it almost engaged she got so excited, she let go and the cord recoiled – whacking her wrist in the process.  Injury #1.  Oh. And the motor died.  She  came in the house, had a glass of water and went back out. She tried the blower again and it started.  After about 30 pulls.  Thank goodness.
She finished that part of the job and then went to step onto the raised bed to cut some bushes.  This bed is about 3 feet high.  She has stepped up onto it dozens of times.  But this time, she somehow lost her balance and back she fell.  Well, sideways.  She fell onto the pavement.  On her leg, hip and elbow. Her first thought?  Geez I better not have broken anything- who will walk the dogs?! She got up slowly, realizing nothing felt “broken.”  However – her shin was swelling immediately and bleeding profusely.  Sorry for the graphic description- but heck you readers are used to poop descriptions- so you are tough.
She hobbled into the garage, grabbed a clean dog towel (that stack of dog grooming towels is good for more than grooming) and pressed it against her bleeding shin. She hobbled bent over into the house.  Of course we ALL tried to help. She appreciated our offer of assistance- but because she wasn’t sure we could get the bandages out of the medicine drawer, she sequestered us on the deck. She sat down to evaluate the damage – and decided to call for back up.  Thankfully our neighbors were still  home and came down with tape and bandages.  They got her highness fixed while we watched through the deck door with Einstein shouting out medical directives.
Her highness elevated her leg and took a deep breath.  About a half hour later, she couldn’t resist the temptation to look at her battle scar.  She removed the bandage, put on some antiseptic cream (she probably should have rubbed some lavender into it) and then realized she had no medical tape.  She even checked the dog medical supplies – because frankly, we are better equipped than the human supplies. Nope.  No tape.  So how to keep that bandage on her shin?  The answer.  Vet wrap.  It worked perfectly.  Perhaps a bit of overkill- but it was going to hold that bandage and it doesn’t stick like tape.  Every home should have some. Whether you have a dog or not!
Her highness washed up and went to sit out on the deck to relax with us.  Of course we ALL had to inspect her bandaged leg and the FG REALLY wanted the bag of ice she was using to reduce the swelling.
We eventually settled down and her highness relaxed the rest of the day.  She was able to hobble around and feed us on time- and we all promised it to not make her walk TOO far before we pooped.
Today, Einstein has his cardiology appointment.  And as luck would have it, her highness also has a doctor’s appointment.  I think we should start referring to our house as the “Infirmary.”  But don’t worry – once that lavender gets planted, everything will be just fine.
Have a good one.  Peace and paws up.
Seizure free days: 31