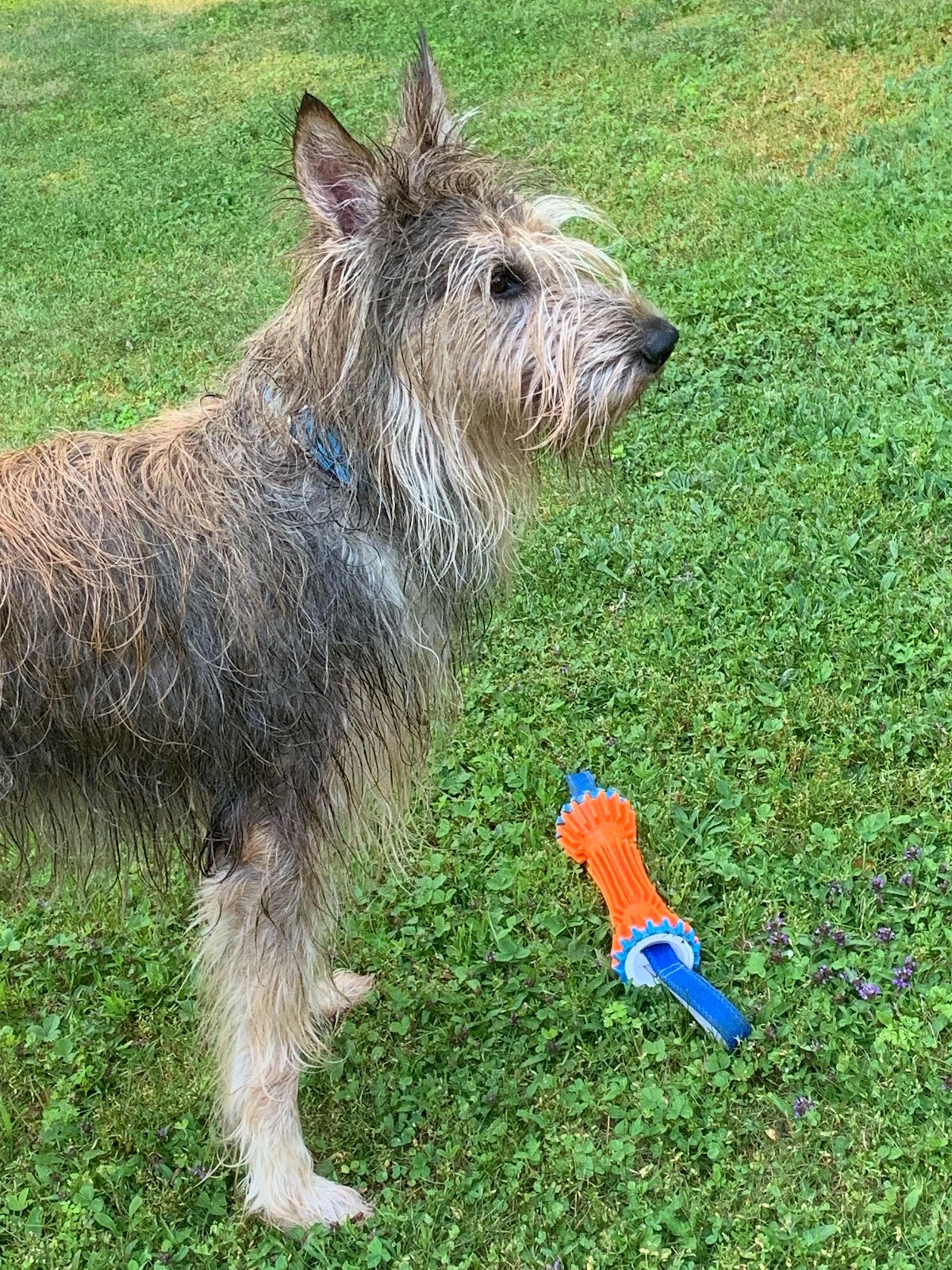 Miracles DO happen.  Or maybe Picards just become all grown up…

Yesterday was another hot one.  No running around or playing fetch until the evening.  My human took me and Einstein out after 7:30 and she still only let us play a few rounds of fetch as she didn’t want us to get overheated.  When we finished, she looked at the trees.  There was a BIT of a breeze…
So she doused herself in bug spray, gave the FG a spray as well,  and put him on the 50’ line of marine rope.  She put on her rubber boots and grabbed a floatable fetch toy.  And then she said a few prayers. I think it was to the Patron Saint of swimming dogs – or the one who protects against human rope injuries. She took a few moments to prepare herself mentally and off they went. Einstein and I stood on the deck watching as they headed down the trail. Einstein shouted “GOOD LUCK!  Look – we’re peeing on the deck!”
On the way down the trail, she desperately tried to keep the FG ON the trail – and not off in the brush – for fear of the vampires. Holding fifty feet of rope and an anxious Picard was no easy fete.
They made it to the water’s edge and the wild child jumped in before she could throw the toy. She tossed the toy and he went right past it- heading for deeper water.  Then – in the CLASSIC FG move, he started swimming parallel to the shoreline.  His plan, of course was to jump up on the shoreline further down from my human and go for a run.  But her highness was ready for him. She started pulling him back toward her.  It was at that point that the FG realized he was busted. So he came back toward her and the fetch toy- which was in shallow water. But the toy was far enough out that her highness couldn’t reach it from the shore.  He stood and stared at the toy.  She said, in that nervous quasi happy tone “Get it!” He poked at it with his nose.  My human’s heart sank. This fetching game was not going to work.
But then, something happened.  It was like a weird electrical surge of energy.  The FG grabbed the toy and hopped onto the shore – shaking water everywhere.  Her highness wondered if she dare toss the toy further out.  She closed her eyes and gave it a heave.  And one crazy Picard leaped into the water and headed straight for the toy. He grabbed it and headed right back to shore.  Out he jumped and dropped the toy- shaking like mad.  Should they try ONE more time?
Well.  They didn’t do it ONE more time- they did it SEVERAL times.  The only challenge was grabbing him when he would get out.  You see, the FG LOVES to rub against ANYTHING when he is wet – and her highness knew he would make every attempt to roll in the tall grasses or rub against foliage – and she did not want him potentially picking up ticks.  So he would jump out and she had to hold him close as he shook himself off.  She might as well have gone in the water – she was so wet.  She would then entice him with the toy – and toss it back in.
And so it went.  When she figured that her luck was probably about to run out, she said “OK, let’s go.” Now she had to hold him by the collar all the way up the trail, until they got to the lawn in the back yard.  At which point he predictably threw himself in the grass.  And rolled. And rolled.
Here are a few shots taken to prove this really happened.  Now they are NOT great photos.  Keep in mind her highness had to hold onto the line as he was going out and gather it as he was coming in.  And she was shooting into the sun. But you get the idea. 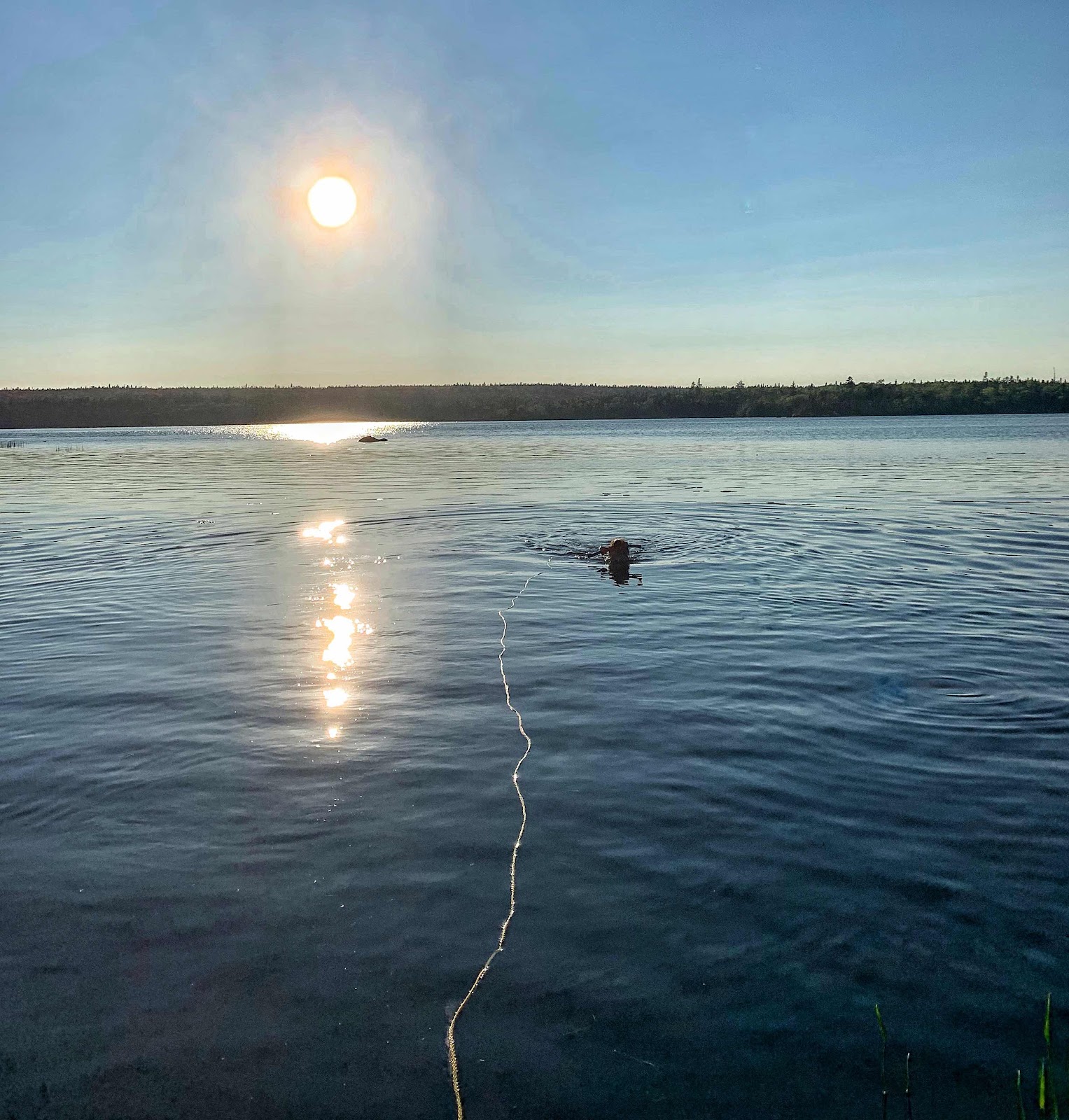 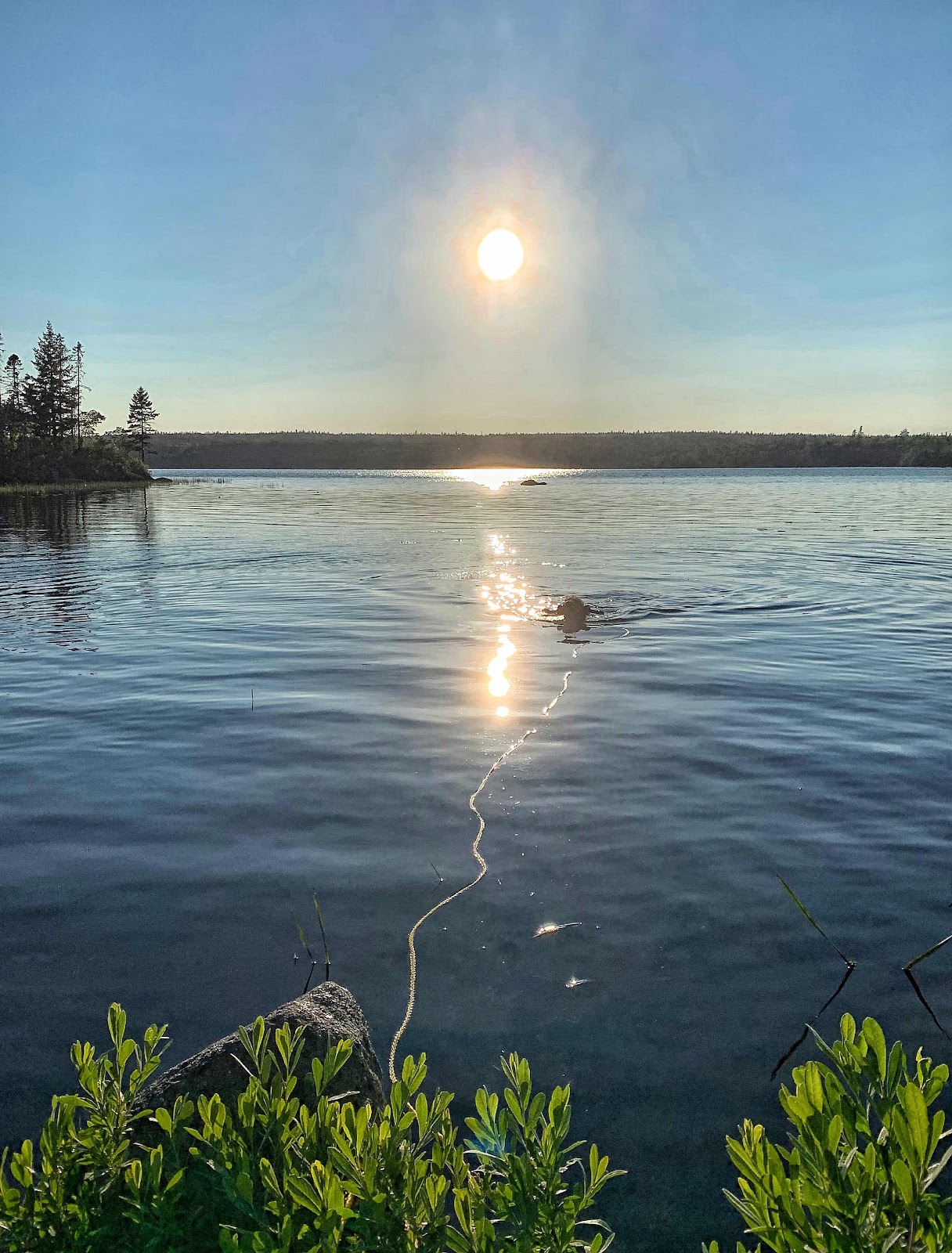 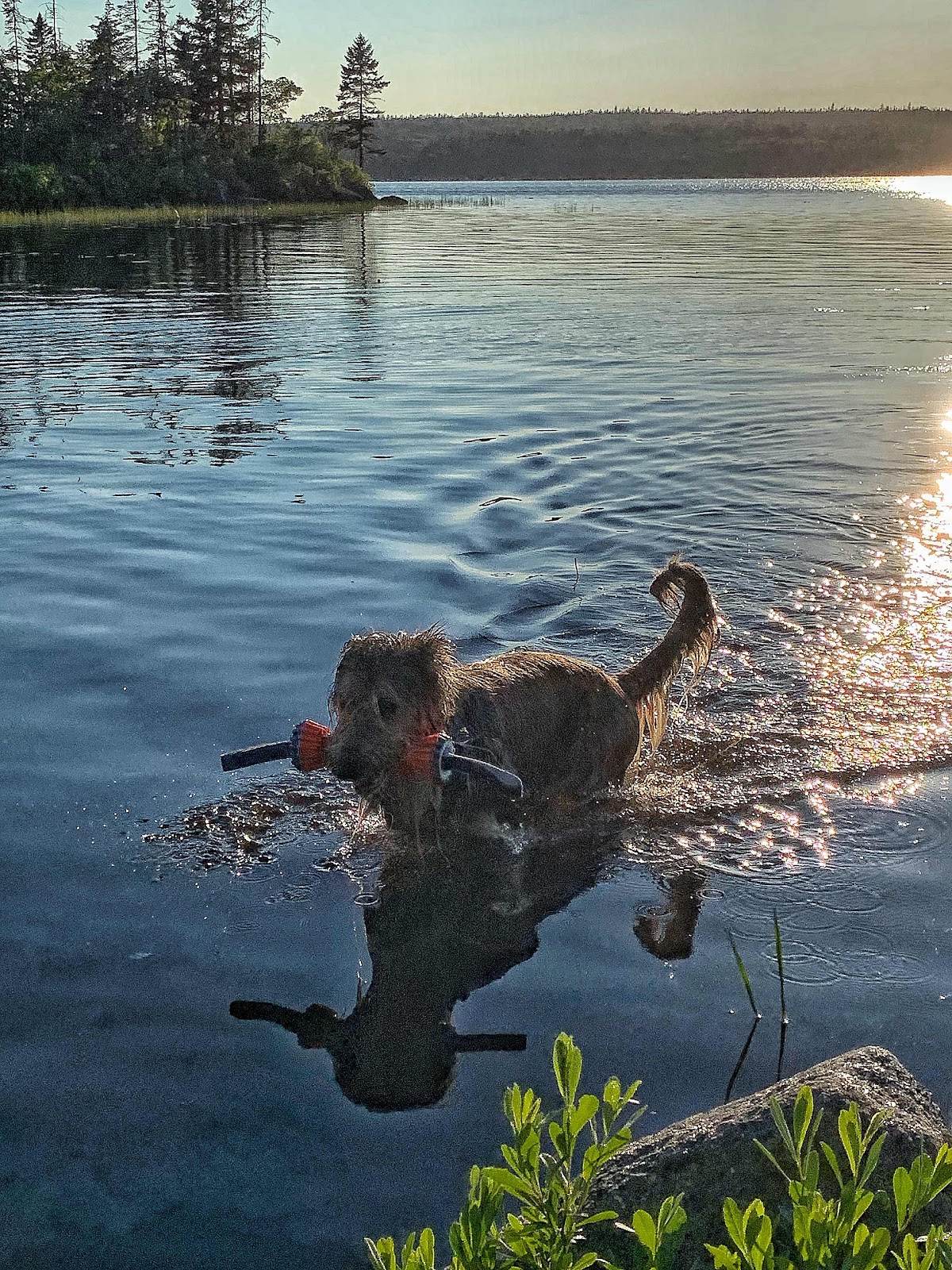 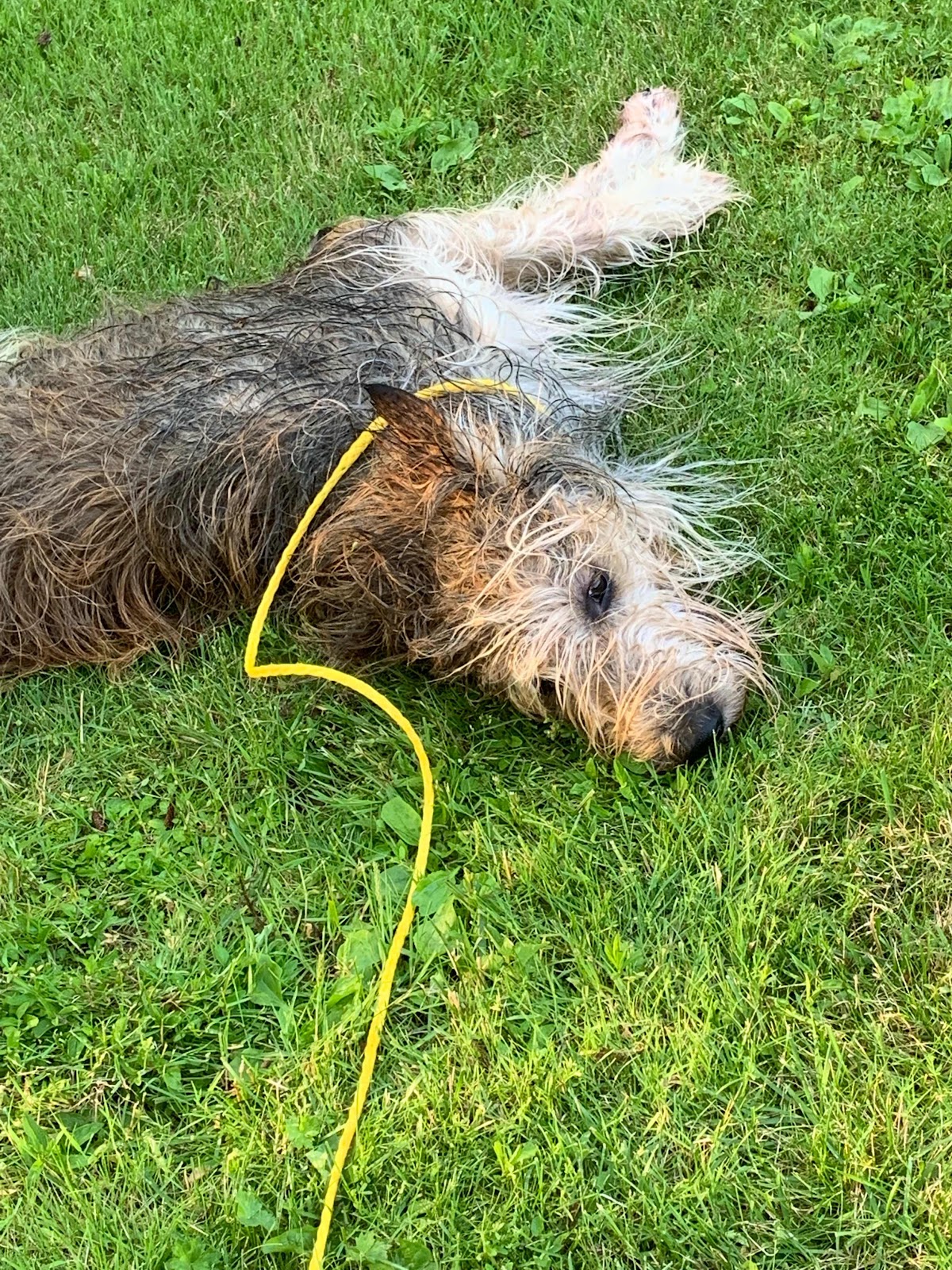 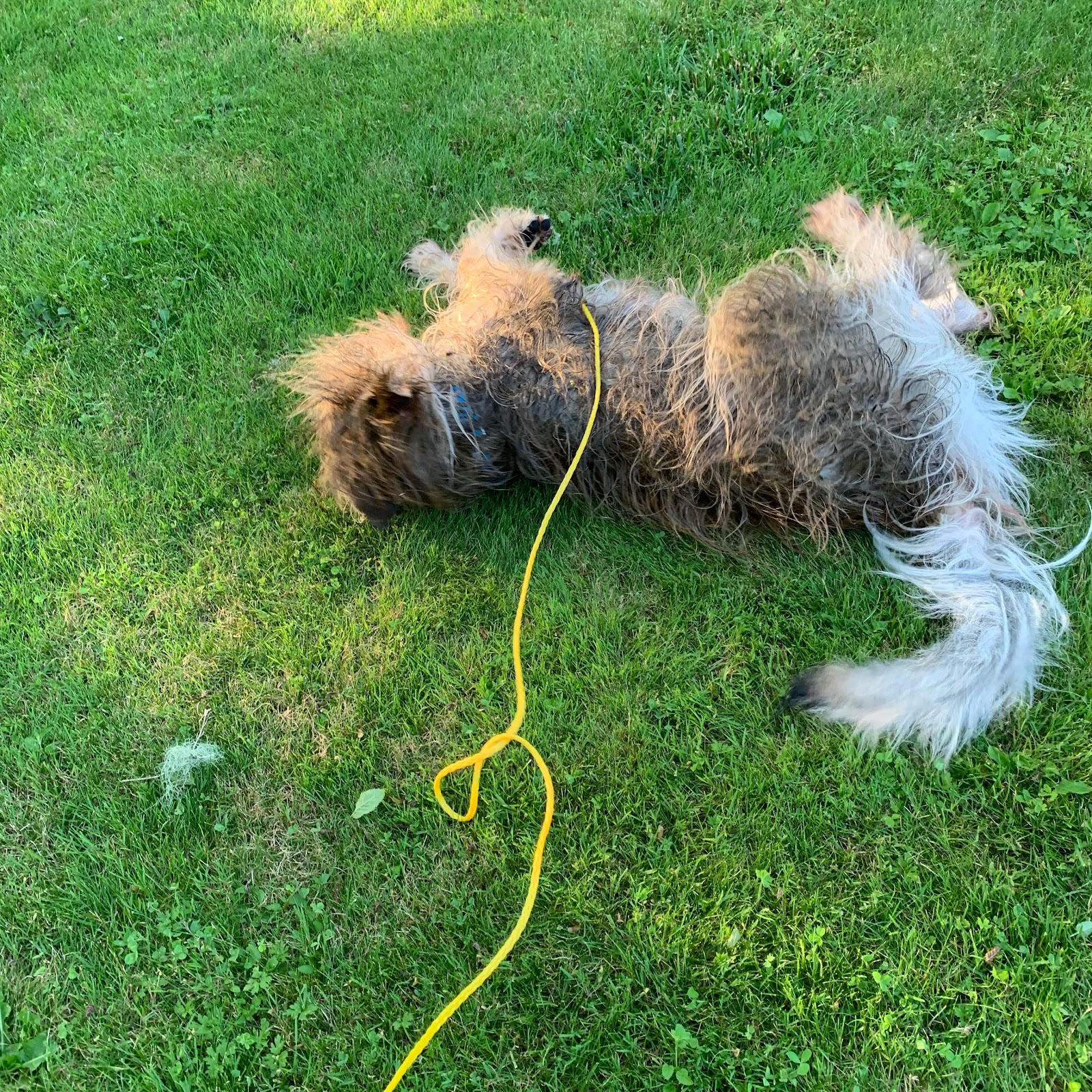 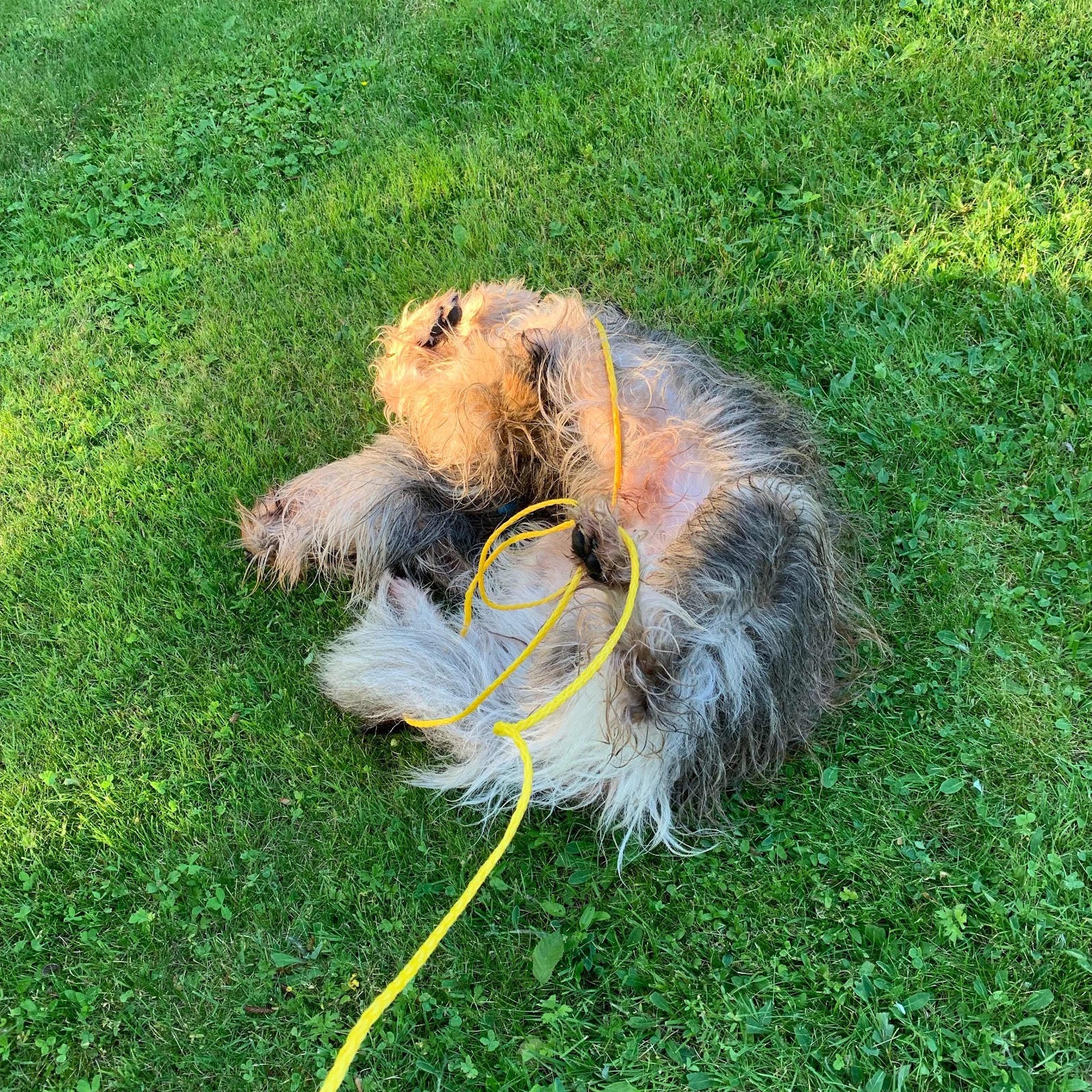 Yes.  Our little brother is really growing up.  Mind you…he’s not QUITE ready to be taken off that line…