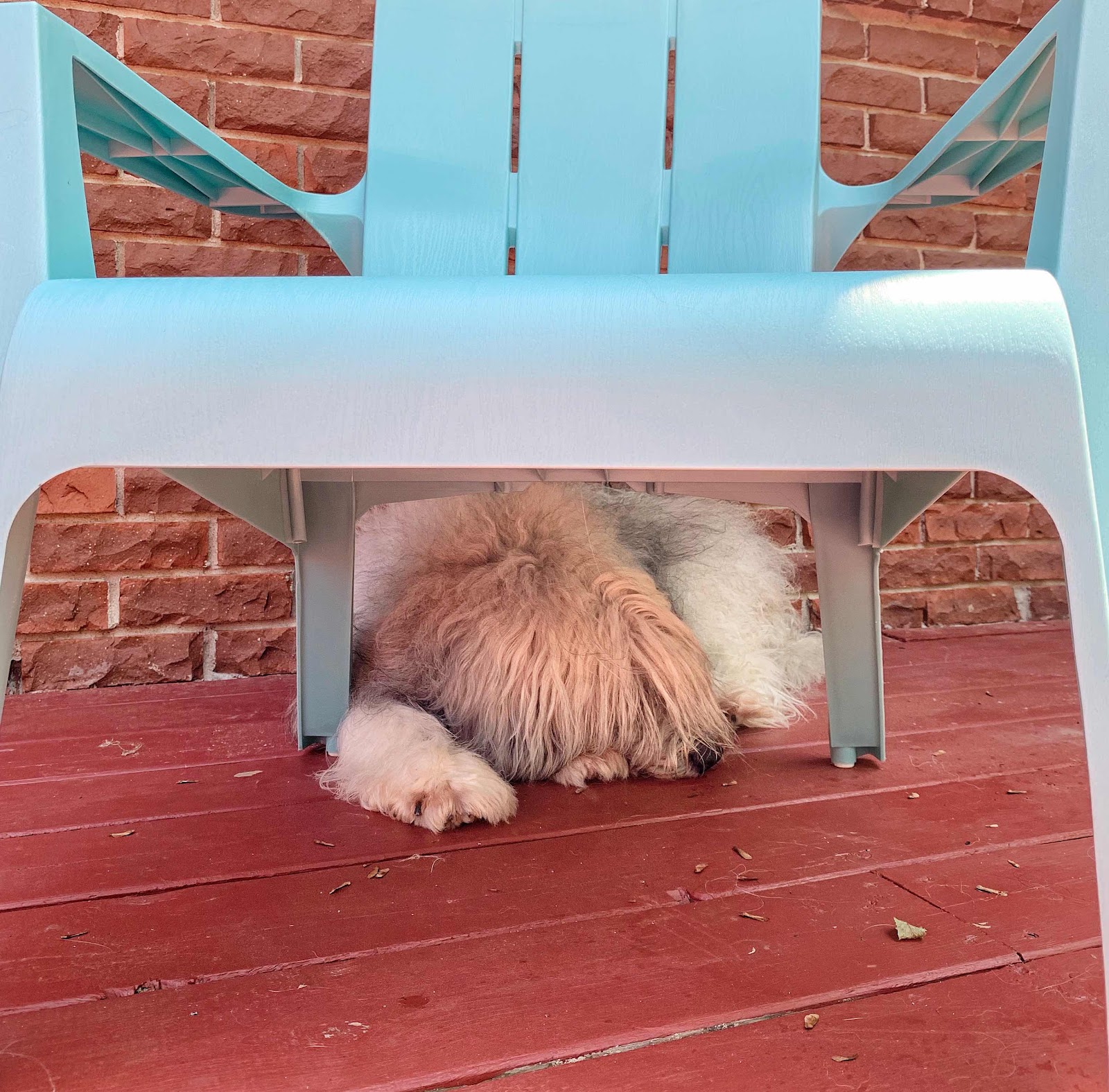 Well, they haven’t come to take the fugitive away so meals are still being delivered on time.

Now for the “other” news.  And before we begin- we are not going to panic about this.  We are going to be positive- and think about next steps – rather than doom and gloom.
On Friday, my human took Einstein to the vet.  He has been licking at his feet – and they are all pink.  She tried trimming his hair between his paws and rubbing in some itch relief medication.  After THAT wrestling match, it still didn’t work.  He has his feet chewed up.  To top it off, the FG helps him.  My human caught him gnawing at Einstein’s feet several times.  So she decided it really needed to be addressed.
The vet didn’t see anything bad on his feet but prescribed a medication that she said will either “work immediately- or it won’t.”  So far, it IS working.
While at the vet, my human asked the vet to listen to his heart.  Remember he had a murmur back in March.  Well, the vet listened – and she said it sounds worse.  She suggested an X-ray- which they did right then and there.
There is evidence that Einstein’s heart is enlarged. He shows no symptoms of a problem- no lack of energy, no coughing – but obviously there is a problem.  The vet told my human there is a new cardiologist who has moved into our area. Before this, if you wanted to see a cardiologist, you needed to go to the Vet College in Prince Edward Island – about a 3 hour drive, or wait for a traveling clinic.  So it’s GREAT news that we now have someone here full time.  Our vet recommended a cardiac ultrasound to get a good picture of what is going on, and to get a baseline measurement of his heart function.  The vet also suggested that the cardiologist would be able to recommend whether, at this point, medication is warranted.
While this is obviously not great news, we are happy that the problem has been found.  Quite honestly, because he is asymptomatic, we would never have even known there was a problem.  So paws crossed he will get the proper treatment to continue living a long, happy life!
Of course, Einstein is going to milk this “heart condition” every chance he can get.  “Sit?”  “Oh that’s too much effort. Just give me the treat while I’m jumping on you.”  Yup.  I can see this resulting in a HOST of bad behaviors which he can blame on “his condition.”  Great.
We have had VERY hot weather the past few days.  I’m voting for a heat pump- which despite the name, apparently keeps you cool in the summer.  Leave it to humans to invent a cooling machine which they call a HEAT pump.  Yeah – I know it also provides heat – but how about a TMD – a Temperature Modulation Device.  That would be more appropriate.  Why didn’t they ask me about the name?  Anyway, I think it’s time to investigate it.  We are melting. If anybody local has recommendations for local companies- let my human know.  Her highness said it might not be “in the budget” right now.  But we dogs want one.  So that’s three against one.  I’m determined to get one.  She doesn’t know I have her VISA card…
Have a good one.  Peace and paws up.
Seizure free days: 29