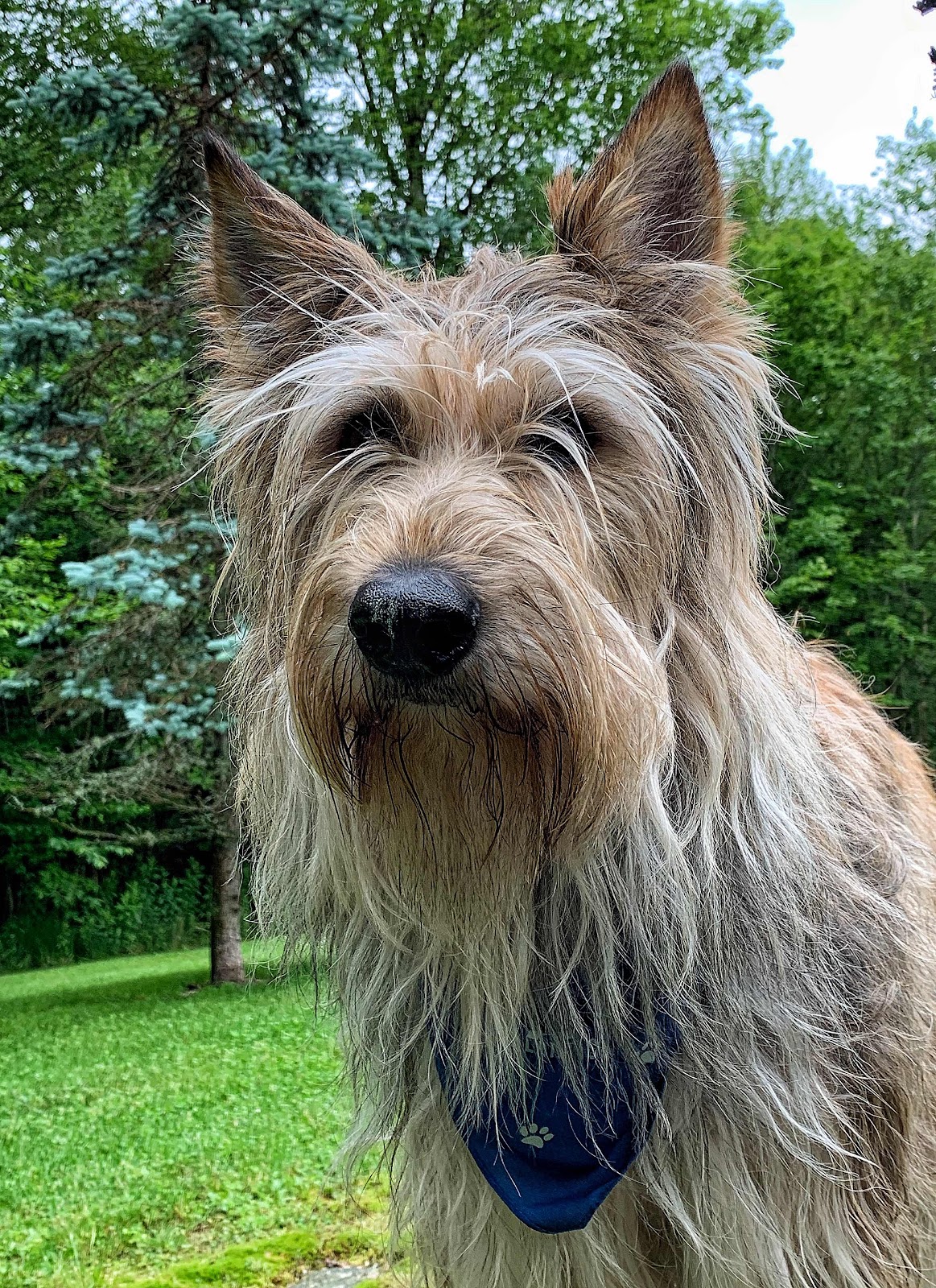 We all know that yours truly will play fetch until my tongue is dragging on the ground. Or I would if my human let me.  Einstein enjoys the game as well but after about 10 returns, starts taking the toy back to the house.  He clearly communicates when he has had enough.

Now that the weather is finally getting warmer, we can only play early in the morning. Or in the evening.  Currently we play until the mosquitoes and black flies begin to carry off the fetch toy.  Or my human is bleeding profusely.  Whatever happens first.
The challenge is the FG.  My human KNOWS he is itching for a run – and she KNOWS if they play fetch, he’ll see it as an opportunity to make a mad dash.  She wants to get him down to the lake for a swim, but she has to finish cutting the trail first.  She did a good part of it the other night before the mosquitoes made her look like a pin cushion.  The key to enjoying the great outdoors right now, is a breezy day.  Got a breeze?  No bugs.  No breeze?  Better wear your big suit.
Anyway, she wants to take him for a swim – and will do so within the next few days. On a breezy day.  But she remembered that last year, the FG liked to swim down the lake.  And then he would go for a run in the woods.  To address that challenge, she went shopping for a long, floatable line.  So she can “direct” our freestyle swimmer.  She went to several places.  She had seen one “for dogs” last fall and didn’t get it at the time. Bad news – they no longer carry it.  She did find a 50’ rope with an attached clip in the marine section of a hardware store.  So she got that.
The other night, it wasn’t breezy enough down at the lake, so after Einstein and I had our game of fetch, her highness decided to put the rope to use on land.  And she would play fetch with the FG.
She threw the toy, and held onto the end of her 50’ leash.  Out he ran and back he came with the toy.  Brilliant!!!! She tossed it again.  Again he came back.  Awesome.  But we’re talking about the FG.  Next toss he goes out and comes back half way.  He promptly rolls on the toy.  She walks over, picks it up and tosses it.  Out he races. Grabs it and lies down.  And so it continued.  My human fetching. Multiple times.  But the BEST part?  Picture a rolling Picard tangling himself up in 50’ of line.  Quite an entertaining scene.  I think they should take that trick on the road.
Ah the joys of summer.  I can’t WAIT to watch him go for his swim.  My human better wear waders.  Or a bathing suit.
Have a good one. Peace and paws up.
Seizure free days: 27