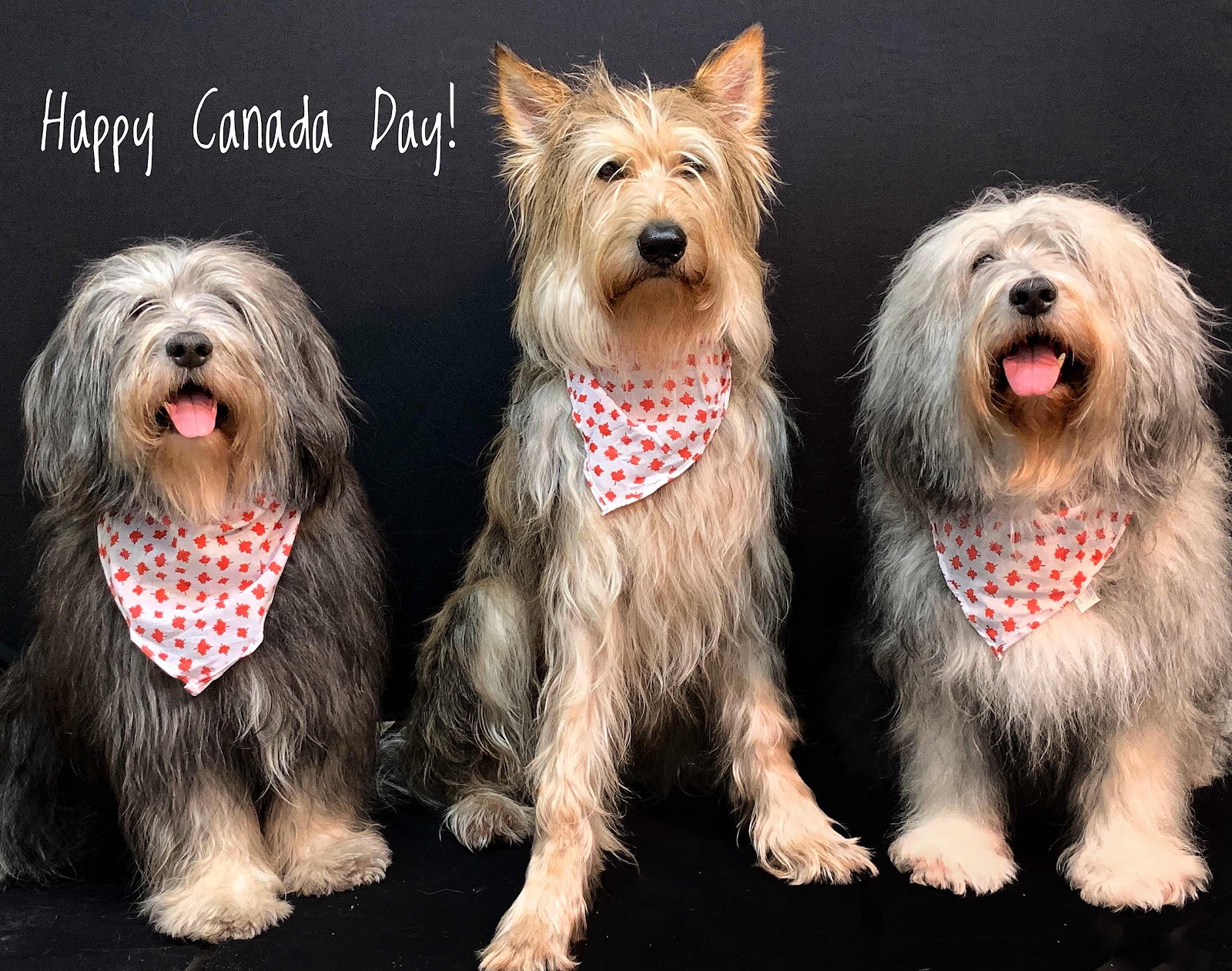 July 1.  And it’s Canada Day! A day to celebrate the true north strong and free.  From far and wide.

As you can see, we had the obligatory holiday photo shoot.   Her highness spared us the flag head gear this year and bought more subtle bandanas for us. We had a small flag too. And the only one who would POSSIBLY hold it was Einstein- and he wasn’t cooperating. We would have stuck the flag in the ground outside and taken our photos there – but it was raining.  And heaven forbid,  when she tried to stand it up and gather us around it inside, all heck broke loose.  The FG wanted to rub against it, I wanted to pull it, while Einstein just sat smiling.  My human didn’t get any photos of the melee because she feared being arrested for desecration of a flag.
So do you know the five breeds of dog that originated in Canada?  If you’ve been a long time blog reader, you may recall this answer.  First off, we have a northern dog that was bred for sledding. Not riding in a sled.  Pulling a sled.  They are actually called by two names – the Canadian Eskimo Dog (the original name) and the more recent name – the Canadian Inuit Dog. Here is a short video about the breed.  I’m not sure all of these dogs like to live in a home.  And … well I would be a bit more careful with ANY dog and a baby… But it does show you the breed.
https://youtu.be/HSU32f0OqUA
There is also a movie about the Canadian Inuit dogs living in the North – with Polar Bears as neighbors. I haven’t seen the whole movie, but I warn you that these dogs live in pretty harsh conditions.  Still – if you want to see these dogs in their natural environment- the film is available on-line and is called The Last Dogs of Winter.
Our next Canadian breed is the web-footed, water-loving affectionate gentle giant- the Newfoundland.  Here’s a good description of these big guys:
https://youtu.be/6Bg9XTPsz4Y
Next we have what is probably the most popular dog on the planet.  The all around happy-go-lucky Labrador Retriever.  They really don’t need a video – everybody knows about Labs – but just in case you have been living on a dog free planet – here they are:
https://youtu.be/0cj81wHmfXc
Next we have a breed that comes from our very own province – the Nova Scotia Duck Tolling Retriever.  Every second household here has one. OK.  That’s not true. But they DID originate here. Check them out:
https://youtu.be/zRWfwa3Ivhs
So there you have our Canadian breeds.  But wait – I said there were FIVE breeds that originated in Canada.  And there were – the last one being the Tahltan Bear Dog – a breed that originated in the northwest.  Unfortunately- in the 70’s the breed was removed from the Canadian registration records – because no dogs had been registered for more than 20 years.  There’s a bit of a controversy about the breed – as some people are claiming to still own this ancient breed.  There is even a Facebook page for the breed – with  people claiming they have them.  But several sources refute that this is a scam. They say the dogs have become extinct. It’s a mystery…Here’s a video with some old photos:
https://youtu.be/MnfxtIfkZqQ
Now you have your Canadian dog history.   You’re all set. So you can go grab a bag of ketchup potato chips or some poutine or a butter tart or a Nanaimo bar and have a Molson Canadian or a Caesar – and wrap yourself in your Hudson Bay blanket – and celebrate a little bit of Canada today!  Have a good one, eh?!
Peace and paws up.
Seizure free days: 23. A big shout out to Jennifer, who we met yesterday- and who gave me some of my needed medication.  She was so nice – as was her Boston terrier, Sophia who I got to meet too!!!  Paws crossed – so far so good!!!! Thanks Jennifer!!!