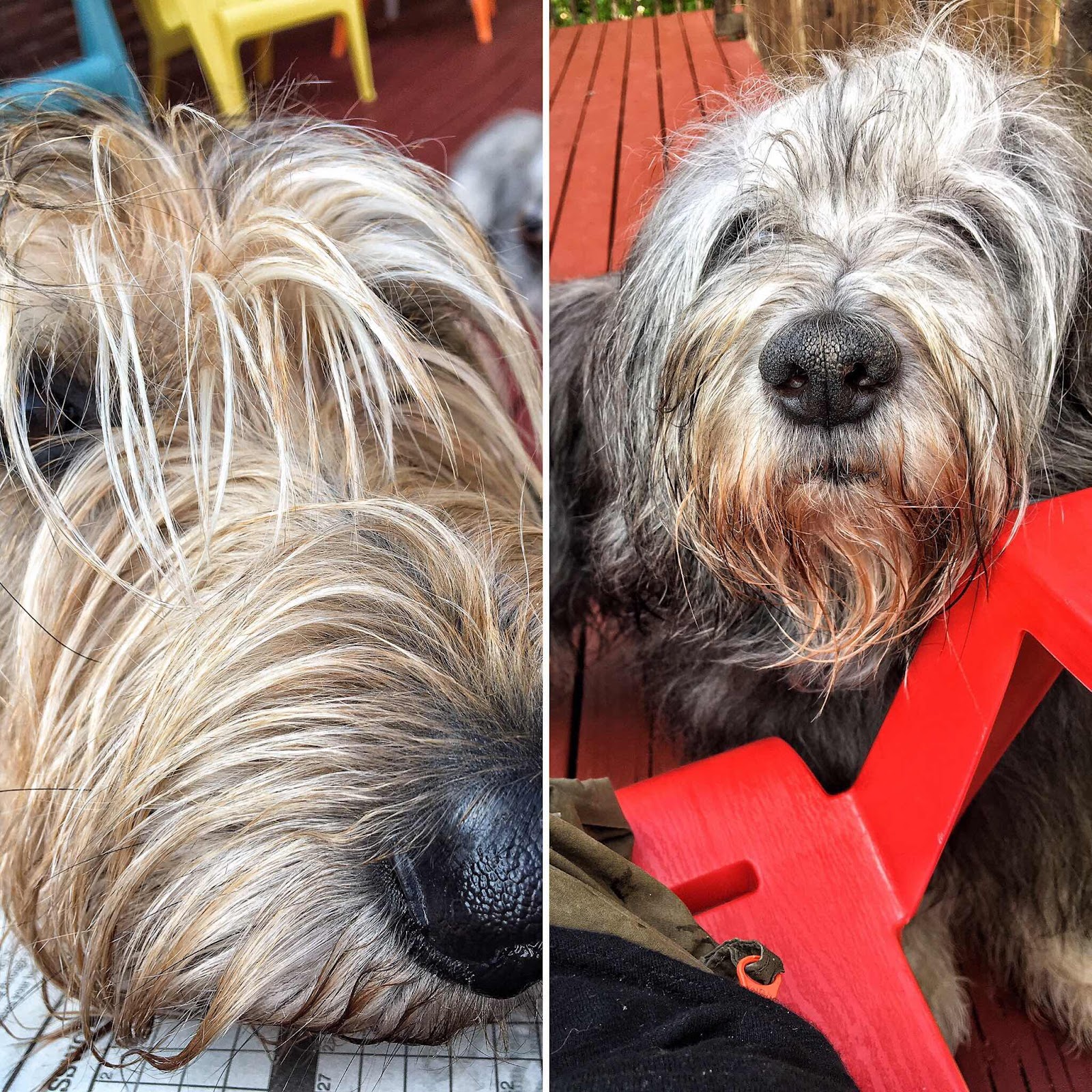 It’s all an illusion.

You know how you watch one of those Hallmark movies and there is a scene where the main character goes for a lovely summer walk, and then returns home to blissfully sit on her deck drinking a cup of coffee?  Well. I’m here to tell you it’s all a big illusion.  Because that character didn’t own two PONs and a Picard.
For all the years my human worked, she dreamed of that movie perfect morning when she could take us for a walk, return and have her coffee on the deck.  It was her big dream.  Nowhere to go.  No commitments. Content dogs. Caffeine and a crossword puzzle.
So yesterday morning when she looked out and saw the sunshine, she said “This is it.”  This is the movie scene day.  She took me and Einstein all the way down the road.  As usual, the good dog had a P3.  Picture perfect poop.  I, on the other hand,  held out.  I didn’t go.   Her highness was not impressed as I was messing up the script for the movie scene.  She brought us home and instead of letting me in the house with Einstein, she told me to wait outside.  Pardon?  But I’m supposed to be inside having scattered kibble while she takes the FG out.  (Remember she scatters the kibble to keep Einstein from barking. Which lasts all of 24.7 seconds).  But no.  Einstein gets the kibble and I get to go on another walk – this time with the FG.
I don’t like walking with him.  He’s too zig zaggy.  So here’s my human- with one arm ahead of her being pulled by the FG and one arm behind her- dragging a totally uncooperative PON.
Down the road we go again.  The thought of Einstein eating that kibble consumed me.  But I didn’t want to poop.  I discovered the other day, that it’s just as easy to poop on the deck as it is on a walk. Mind you, that did not go over well.  But that was MY plan.
We walk all the way down the road and back.  The FG produces.  But yours truly is still holding out.  And as you might imagine, her highness is now getting a bit annoyed because not only is the movie script getting totally messed up, she also keeps thinking about the deck poop incident.  She was determined that I would go while on the walk. (I hope you’re beginning to see the neurotic stubbornness on both sides here.)
So we approach our driveway.  I am no longer dragging behind – I’m trotting ahead because I’m wondering if Einstein missed a kibble.
Imagine my shock when her highness tells me I STILL cannot go in – and she lets the FG in the house.
Oh and I forgot to note that while we are walking – her highness can hear Einstein shouting for our return.  She can hear him quite a distance away.  Because she forgot to close the windows.  Which she does to spare the neighbors.
This time she marched me across the wet lawn., around the house and back toward our trail to the lake. It was at this point that I realized she wasn’t giving up.  So I produced a large P3.  She smiled.  I rolled my eyes.
She let me off leash and I ran around to the front door.  She was as happy as I was – she could now resume her movie scene morning.
She fed us and grabbed some toast and yogurt herself.  She then armed herself with her crossword puzzle and her big cup of coffe.  She also armed herself with a large container of vinegar and water – in the event that one of us peed on the deck.  Mind you, she warned us not to.
She FINALLY sat down.  At which point, the FG and I tried to immediately get on her lap.  This wasn’t in the movie scene!  She battled with us and begged us to settle down.  Then the FG started bugging Einstein to play.  Leaping and barking.  And squeaking and spinning.  Not exactly a peaceful scene.  But after a few minutes we all eventually settled down.
So there she was.  The perfect move scene morning.  The one she had been dreaming of for so many years.  So many years.  Coffee in hand.  Dogs at her feet.  Sun shining.  Birds singing….Perfect.
And that idyllic scene lasted all of 39.2 seconds.  It began with one black fly.  He landed on her forehead.  The breeze picked up so she thought it would be fine.  Then another one flew around her head.  She put her hood up.  She looks at the FG who is twitching his ears.  One was flying around him. When one landed on her newspaper and then one on her hand, she let out a mournful cry.  She gathered up her paper and her coffee and marched back in the house.  We, of course, all followed her. After all, we are like glue so we had to see what the next plan was.
She locked herself in the DFZ, and did her puzzles.  We went back out on the deck through the hole we have created in the screen door. Well- Einstein and I went out – the FG can’t figure out how to get through it.  So he sits inside squeaking.
So much for the movies.  Perhaps tomorrow will be a breezy day….
Have a good one.  Peace and paws up.
Seizure free days: 17