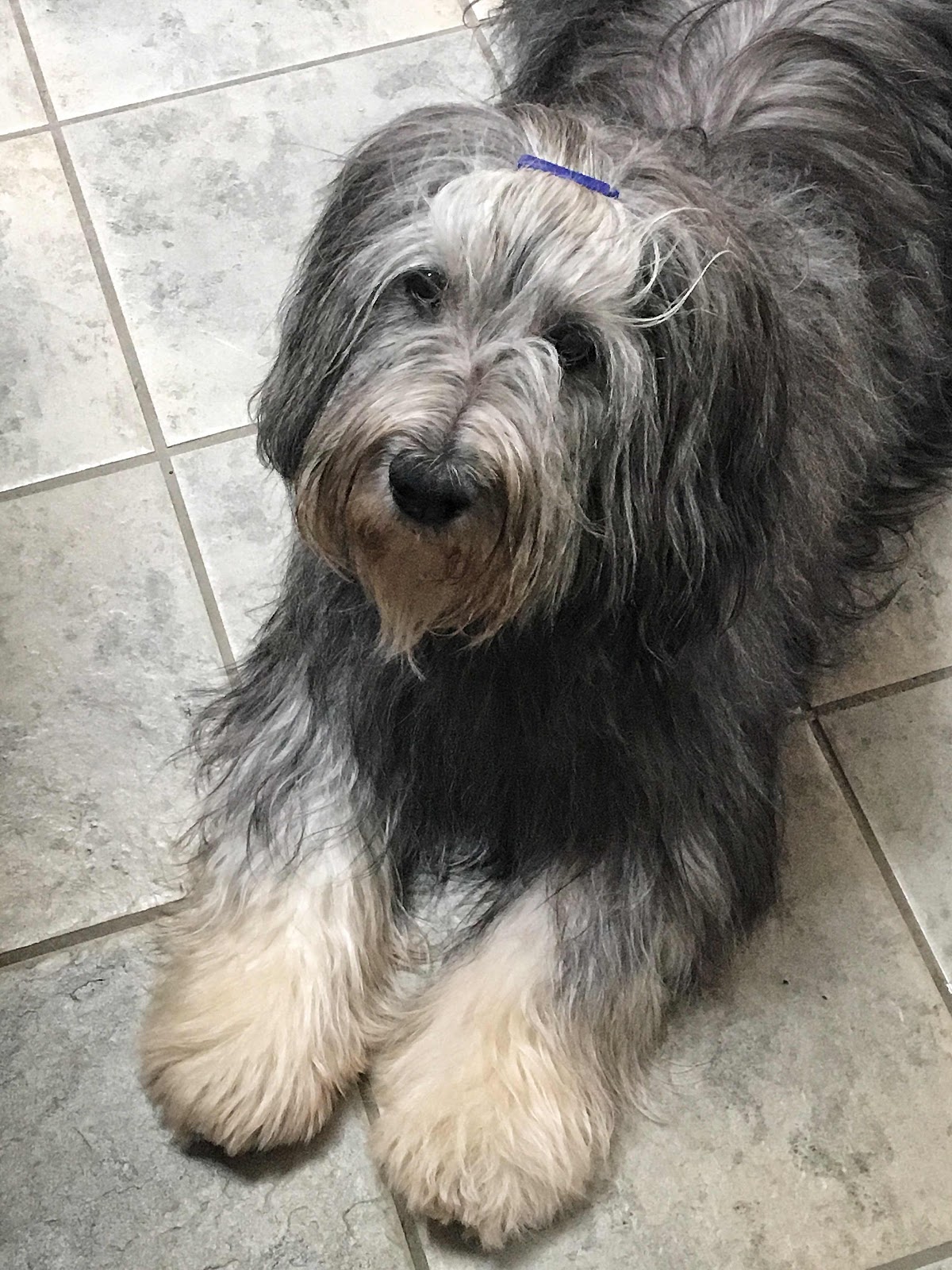 Well I went for my vet appointment yesterday. I didn’t actually see the vet because I was just there for blood work. But I got to see two nice technicians.
Before I went, I of course underwent the obligatory pre-socializing grooming.  When we’re at home, it’s OK to look like ragamuffins who have been living in the wild for months. But we go out in public and we have to look “presentable.”  Mind you – it’s not unlike her highness at home -who is typically dressed in stylish “dog clothes” which are covered in hair and slobber and have a drawstring waistband on the pants – for supreme comfort.  You would never catch her dead in the grocery store like that – but at home – and even out on walks, she looks like a  ragamuffin herself.  Just sayin.
After becoming presentable and even wearing the mandatory hair clip, we headed to the vet.  My human plopped me on the scale in the waiting area – and it appears I have gained a lb.  Mind you, I have always been on the thin side.  She then plopped me on a bench with her- so I wouldn’t sniff and snark all the germs on the floor.  How do you spell “paranoid?”
I must say- I was on my best behavior.  The two technicians commented about how I’m always so good and so well behaved.  My human smiled and rolled her eyes.  If they only knew.
After the vet, she took me to the pet store where we get our food.  OK.  I haven’t been in there in awhile.  Well let me tell you, my brain exploded.  I just stood and stared at this big display of deer antlers, bones and other assorted chews.  Seriously.  I thought I had died and gone to heaven. I was paralyzed.
Several people asked what I was.  I thought my human should have said “a cat,” just to confuse them,  but she told them what I was.  I was behaving so she told the truth.  Otherwise she would have said a Polish Highland Terrier.  Or a Doodle.
One person said “wow- that must be a lot of grooming.”  My human wishes she had a dollar for every time someone says that. Now she just says “oh just a bit.”
I came home and Einstein and the FG had to do their “inspection” of me.   I passed.
We all went out on the deck when we got back- with my human threatening us with a squirt gun if we attempted to pee. After all the deck painting agony last year – she STILL had to do touch ups the other day where it was ALREADY peeling in spots. Bad enough about the peeling – here I was looking all dapper and clean – and the entire deck was coated in a fine dusting of pollen.  We all had green feet in no time.
Later in the afternoon, my vet called…
They don’t have all my results yet- but one important result was obtained.  One of my primary meds is actually below the therapeutic range for effectiveness.  So that means I can increase it substantially if I have any more seizures. That is really good news. We actually already increased it yesterday when we found out – just by a bit.  So HOPEFULLY we will get things under control.  My human was very happy.  I suggested we celebrate with some extra treats.  Old spoil sport reminded me of that extra lb. I had gained.  I suggested we go for another walk.  She pointed out it was raining. Score one for her.  This time.
Thanks again for all of your positive thoughts and good wishes.  They worked !
Have a good one. Peace and paws up.
Seizure free days: 4