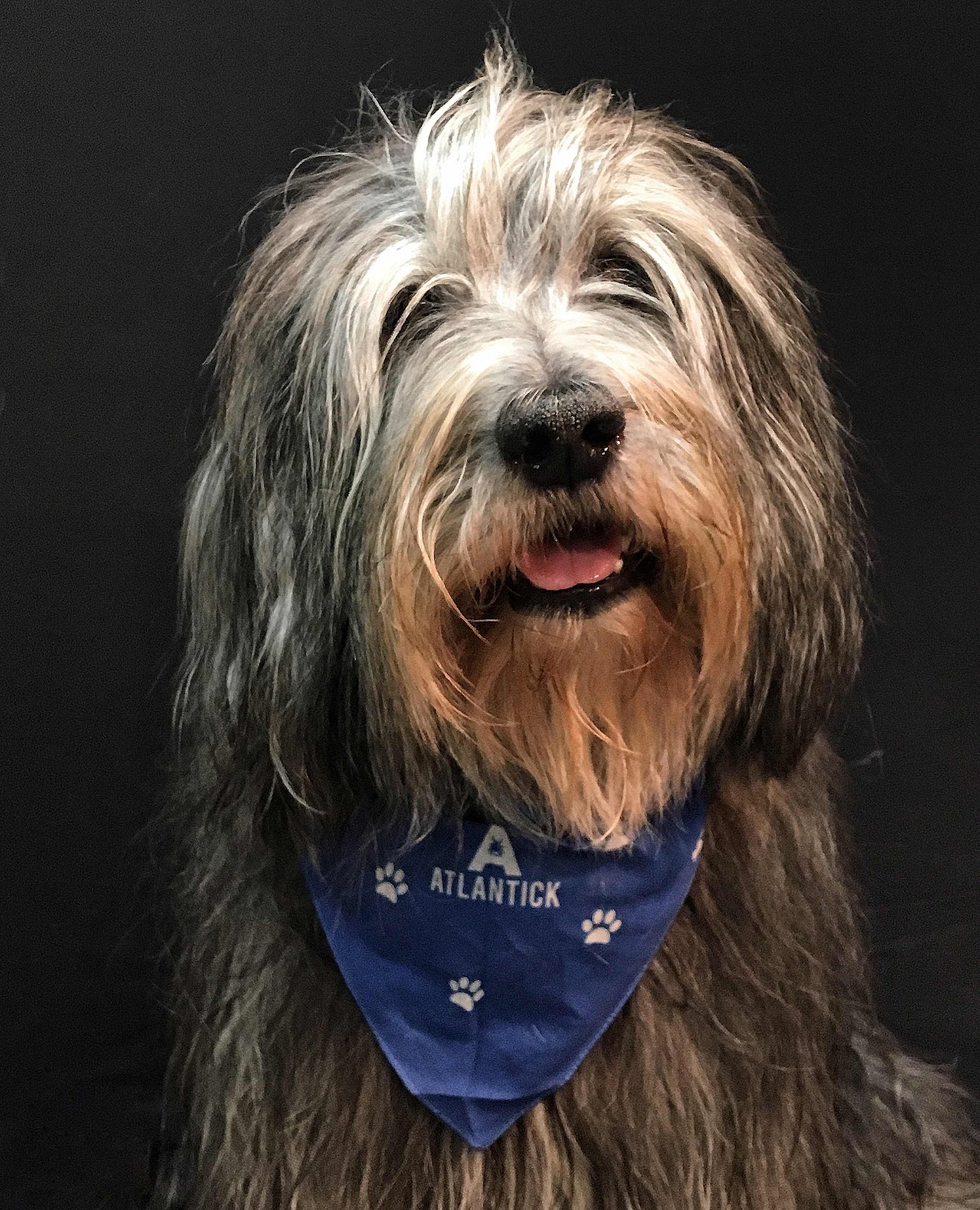 Well check out my new bandana!  It seems the good folks at Atlantick – the place that makes the all natural tick spray that we have been using, read my blog.  So they sent us some cool bandanas!  Now we just spray Atlantick on our new attire, and those ticks take off in the other direction! So far so good. We give the product 4 paws up.  Out of 4.  We still do good tick checks – just to be sure one of the mini vampires hasn’t broken through the force field.  But as I said, so far so good!

This isn’t a great shot of all of us – you know what a gong show it is to get all of us to take a shot – but we wanted to say thanks to Atlantick! 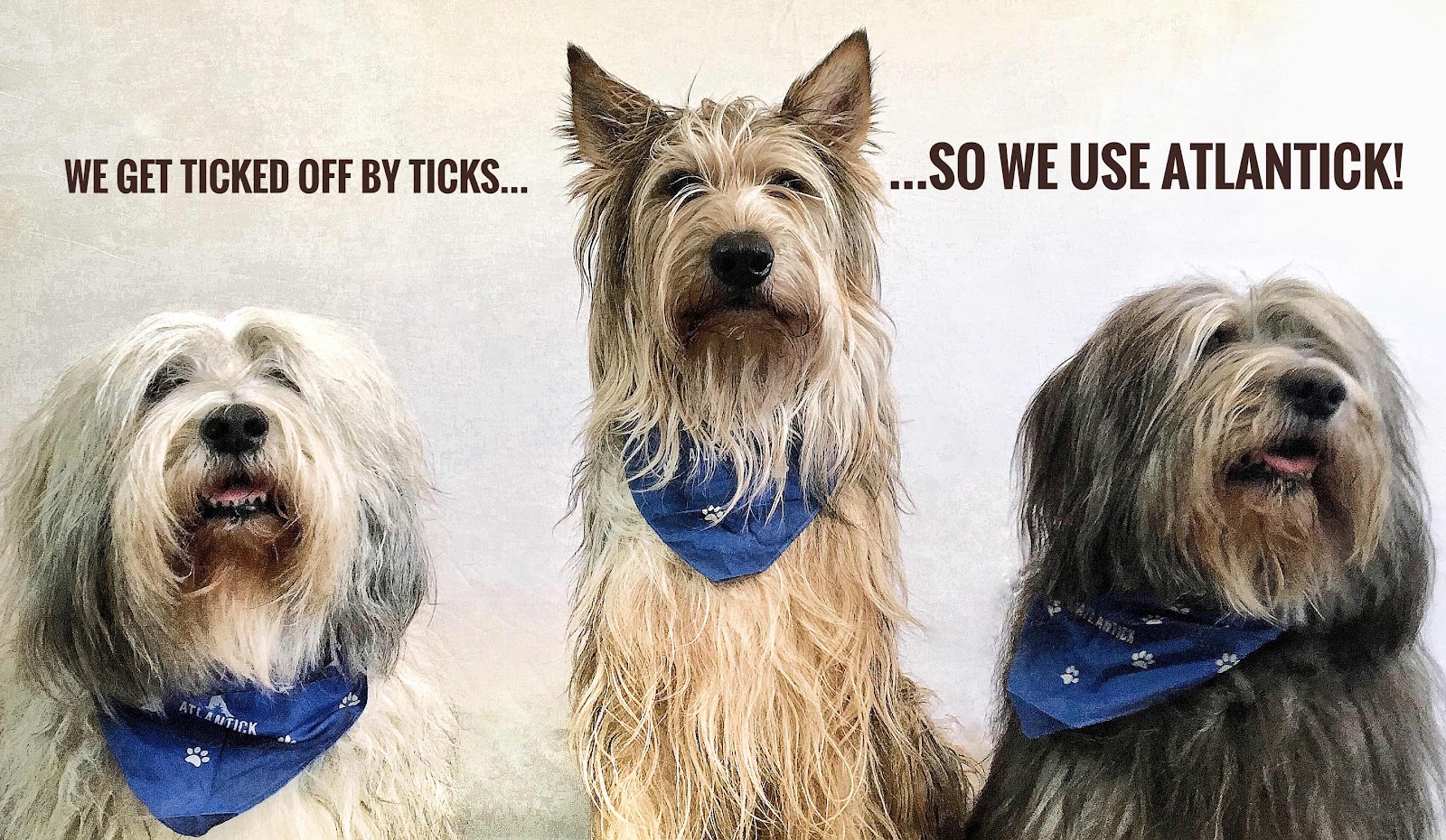 OK I know the “ticked off” line is kind of corny – but hey – it was the FG’s idea and we wanted to support his effort.
In other news… today is National Pet Memorial Day.  A day to think about those dogs who have gone onto the Rainbow Bridge. And other pets as well.  Cats, gerbils, iguanas… any pet who has enriched your life.  Mind you, I’m partial to dogs….
Her highness’ pets when she was young included Mickey, the Irish Setter, and Goldie, a goldfish who jumped out of his bowl.  Love the originality of the name.  She was training him for agility and it didn’t go as planned.  There apparently was also a turtle named Stanley who was found during a summer vacation lake holiday, and who apparently didn’t adapt well to life in a large plastic enclosure with a palm tree.  Oh yes – and there was that Easter chick – who was a gift from an uncle.  And who stayed at home for 24 hours before he was returned to his farm.
Then, in her “adult years,” there was Barney – the multi-terrier cross SPCA “special” – fondly known as the “Biter.” There were four Bernese  Mountain Dogs – Schubert, Guinness, Harper and Paxton, and the lovable yellow Lab, Beamish.  Every single one of them taught my human something and every single one of them held a special compartment in her heart.  My human found these quotes and they pretty well sum up life with dogs….
Dogs come into our lives to teach us about love and loyalty.  They depart to teach us about loss.  A new dog never replaces an old dog; it merely expands the heart.  If you have loved many dogs, your heart is very big.
– Erica Jong
It came to me that every time I lose a dog, they take a piece of my heart with them.  And every new dog who comes into my life gifts me with a piece of their heart.  If I live long enough all the components of my heart will be a dog and I will become as generous and loving as they are.
-Cheryl Zuccaro
Those make us sound pretty special, don’t they?  I’m going to pass them to my human when I attempt to get her up at 4:30. Or even when I want a treat…
Speaking of which – time to get her moving.  I have my appointment at the vet at noon – just for some bloodwork.  Chances are if I play my cards right, she MAY stop at the pet store with me on the way home.  Maybe I’ll limp after they take my blood – and try to milk it for extra treats. JUST kidding!!  Maybe.
Have a good one.  Peace and paws up.
Seizure free days: 3