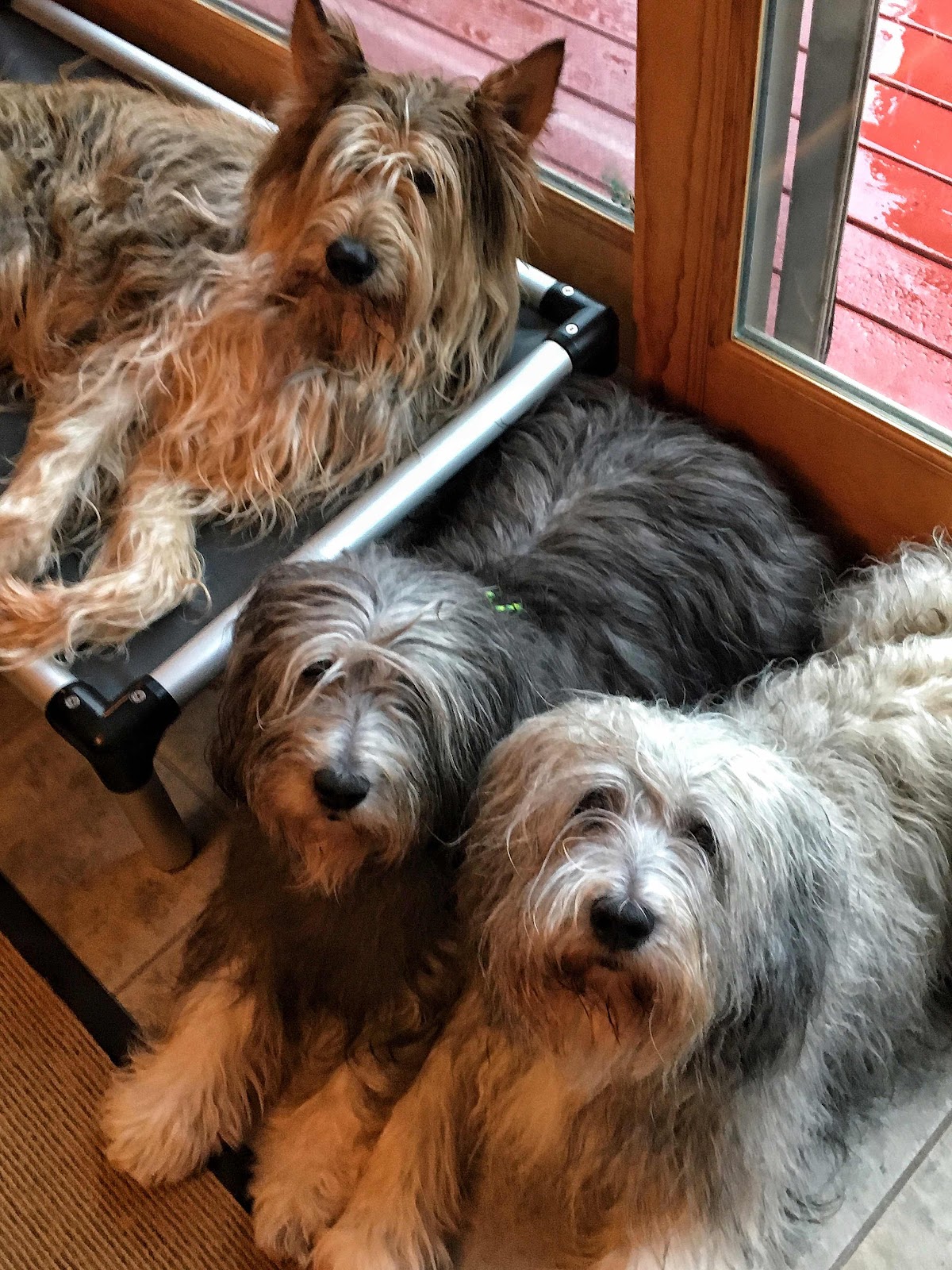 Her highness was on the phone the other night, talking to her old friend Janet, in Texas. No sooner did she comfortably situate herself on the sofa in the DFZ, when Einstein and the FG decided to start playing Poke-a-PON.  We know what that entails…the FG pokes Einstein in the butt, Einstein swings around as if he is about to kill him – but instead he just barks at him.  And barks.  And the FG leaps back and squeaks. And he goes back to poke again. And so it goes. Poke. Spin. Bark. Squeak.  Poke. Spin. Bark. Squeak.

Her highness shouted “knock it off” because she couldn’t even hear Janet. Even Janet commented about the melee.  Her highness said “welcome to my multiple dog world.”
Oftentimes, when she meets someone for the first time, the subject of dogs comes up. Surprise, surprise.  And people comment and say “Wow- three dogs-what’s that like?”
She has thought about life with multiple dogs and depending on the day, she has a variety of analogies:
Now picture those triplets, sharks, cats and monkeys running to the fridge door, every time it is opened. Picture them under your feet as you prepare a meal in the kitchen.  Picture them waiting outside your bathroom door.  Picture them waking you up at 5 AM.  Just because.
Picture walking all of them in the rain- when they don’t want to go out.  Except the sharks.  They don’t care.
Picture saying names repeatedly throughout the day – to which no one responds.
Picture the fact that they have learned pack mentality and they KNOW that you only have two hands. And if one is getting pets, they ALL WANT PETS.  At the same time.
Picture windows covered in original olfactory art.  Especially in your vehicle.
So have you got the picture?   The best analogy is two year old triplets.  Triplets who pretty much stay at two years of age – for MANY years.
So what do you see?  Chaos?  Insanity?  Unbearable, sleep deprived craziness?
Yup.  That’s all true. But what you also need to see is that pure, unconditional love and devotion that we canines ALL provide.  That longing for you when you go away.  That excitement when you return.  That wish that we could be with you all the time.  Because YOU are our human.  Picture all of that – times three.
Yup – we live in a WILD household.  And want to know a secret?  My human wouldn’t have it any other way!
Happy Friday!
Have a good one. Peace and paws up.
Seizure free days: 10