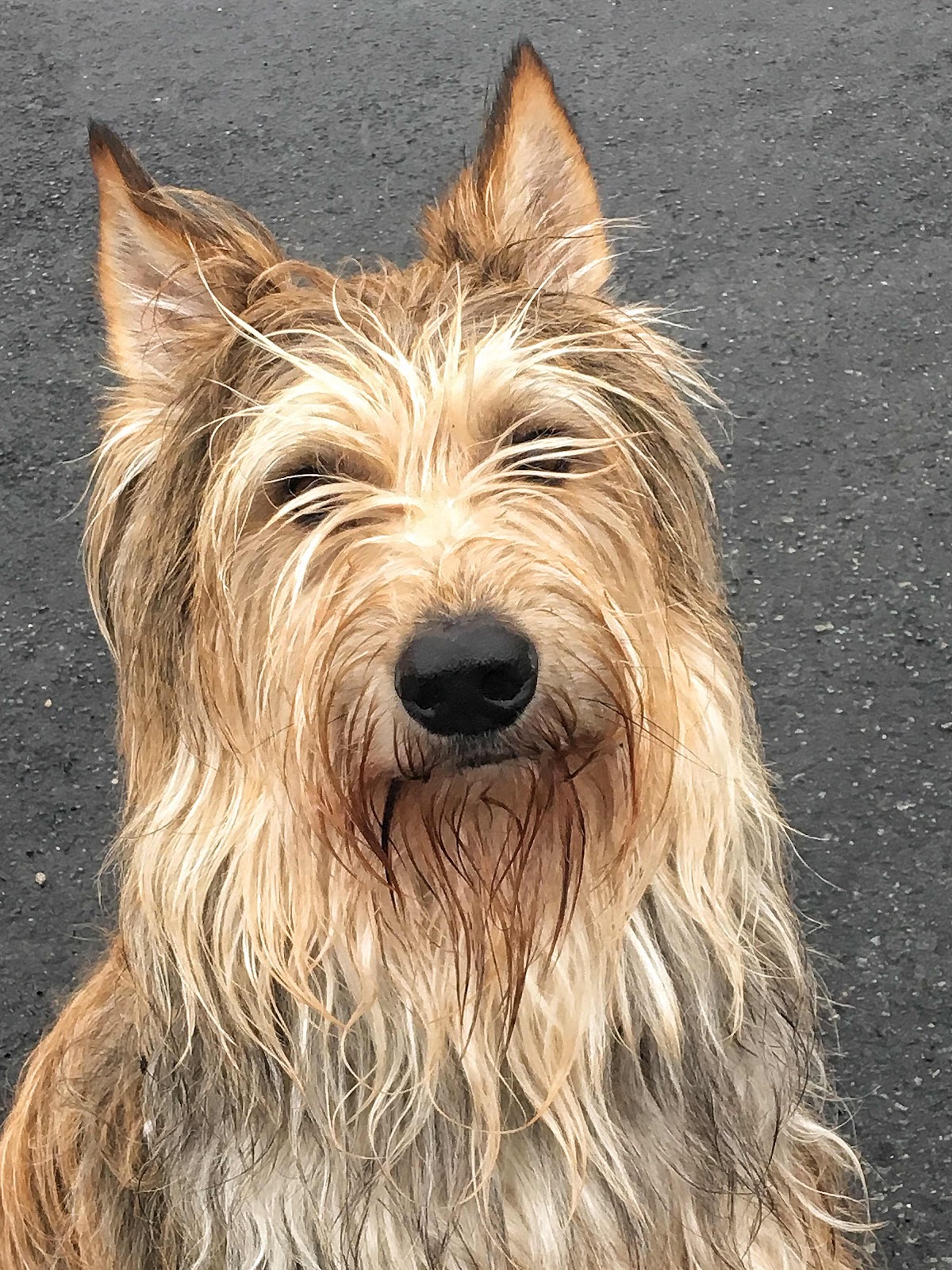 First off, a huge Happy Mother’s Day to all the human Moms out there! I hope your kids are as good to you as we dogs are. Well – at least sometimes we are good.

Yesterday morning we let our human sleep in.  OK. I did try to get her up at 4:30, but she reminded me it was Saturday. We then let her sleep in until 5:45.
It was a grey and very foggy morning.   It had rained the night before, so although we had hoped to go for a walk on the trail, we decided we would rather not dodge the puddles and the mud and we stayed on the road. Einstein and I did our thing and then my human took the FG out.  Despite the fact that he should have been compliant because it was Dog Mom’s Day – he was NOT cooperative or interested in a photo op.  When he stopped in the road, and was standing and just listening and watching – as he loves to do – my human kept trying to get a photo of him.  She would SLOWLY walk around him and he would literally keep looking away from her.  She would go to his other side and he would face the other way.  You have to keep in mind that he is NOT a morning dog. She did manage to get a shot or two, but it wasn’t easy.
Anyway, as they headed down the driveway, my human suddenly noticed something.  Right there.  Not 10 feet away.  In broad daylight.  On the side of the driveway. A big fat porcupine.  He was munching on greenery.  The FG was thankfully on leash, although he actually didn’t appear TOO interested in the walking pincushion.  But no doubt, if he had been off leash he would have gone to meet the intruder.   My human stomped her foot, and Spike took off into the woods.  She breathed a sigh of relief and realized that she had let Einstein off leash as we had come down the driveway earlier.  For some reason, she didn’t let yours truly off.  Talk about LUCKY.  As you may recall, I have been up close and personal with Mr. Needles before – and it wasn’t pretty.  I have had two encounters – one worse than the other. But like many dogs, my human fears that it wouldn’t stop me from greeting  Spike again – so she’ll be extra vigilant now.   Did you know that because porcupines eat a lot of foliage which is high in potassium and low in sodium, they often have a potassium-sodium imbalance.  Which means they end up craving sodium.  And where can they find sodium?  Road salt.  And when road salt splashes on cars, they then chew on car parts.  They have been known to chew through brake hoses!  Talk about dangerous.   They also like to chew on things that may contain sodium from human sweat.  Like canoe paddles or even axe handles!   Because there is sodium in human pee, they often like to chew on and destroy outhouses!  Who knew! I’ll be sure to remind my human to always bring in her axes.
We have no big plans for today.  Probably some fetch and some extra long walks because the forecast is calling for sun.  Doesn’t matter what we do – as long as my human is around, it’s all good!
Have a good one. Peace and paws up.
Seizure free days: 10