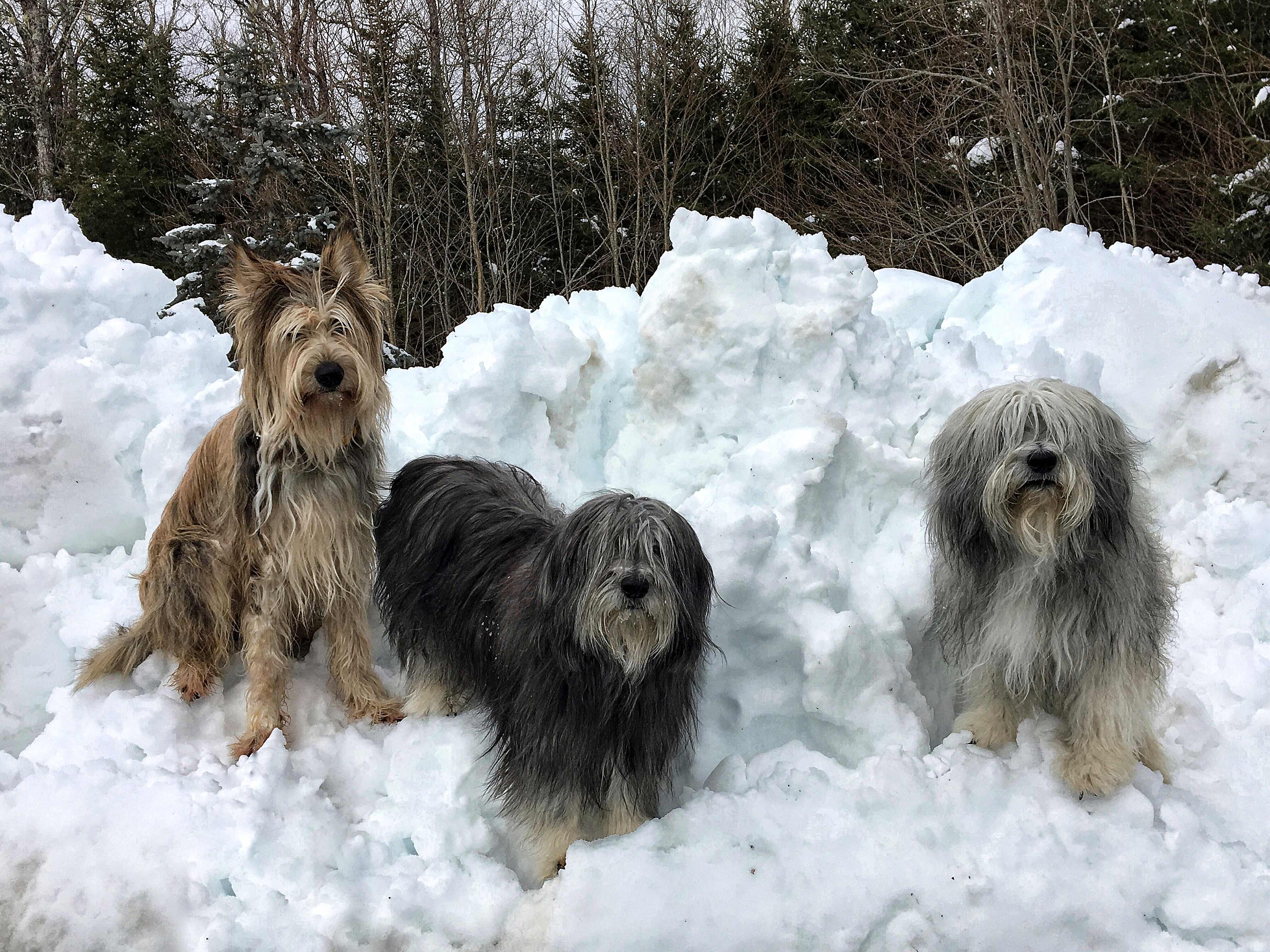 I can’t believe I forgot to tell you about something rather amazing that the FG did the other day. Now don’t get all excited – he’s not ready for the Worlds’s Most Amazing Dog contest.  (More on that later. ) No – this is in contrast to his running away and his ditching  his play date.  So the amazing bar for the FG isn’t super high these days.

Anyway, several days last week, we had extremely cold weather – with high winds on top. So we didn’t go for long walks – but the FG did get to go up to the road to get our newspaper. Obviously with my human.  One day, the paper had blown way down the road.  Another day, there was no sign of it.  So imagine my human’s  delight on a third day when the paper had blown down into the ditch – along with the package of weekly flyers. Now it’s no fun to go down into the ditch at the best of times – but 100 times worse when the slope to get down is icy.  She spotted the papers and immediately thought of her old Labrador who could be instructed to get the paper if it went in the ditch.  Heck, I hear he even retrieved garbage can lids from the ditch.  So she figured the FG should try – in fact he MAY have done it once before. When it wasn’t icy and snowy.
My human looked at the FG and said “Get it.”  He looked at her and stared.  She repeated herself.  He stared.  She took his head in her hands and directed it to the two papers in the bright pink plastic bags, sitting in the ditch.  She pointed at the papers. He put his head up and watched a bird flying by.  Now you need to know that the FG does get to bring the paper every morning.  True, he tosses it and often just leaves it on the driveway for my human to pick up, but SOME days he carries it all the way to the door.
So then my human picked up a chunk of ice – and tossed it onto the papers.  Well THAT worked.  Down he jumped into the ditch.  Looking for the ice.  She started repeating “Get it” and pointing to the paper.  He stood there and looked at the paper.  Like he had never seen such an amazing thing in his life.  Its’s a Picard thing.  Stare.  And then pounce.  And then, much to my human’s shock, he got the paper.  And jumped up out of the ditch.  She hugged him and told him how brilliant he was.  You would have thought he just won High in Trial at a big dog show.  So now the question.  Try for the second paper?  She repeated her technique, and he did the same.  Complete with staring at the paper again.  And he again brought it up.
My human was overjoyed.  You would have thought she won the lottery.   Until he tossed the paper he was given and it almost ended up in the ditch on the other side of the driveway.  Still – it didn’t, and he happily carried it home.   I think he was showing that he CAN be a good dog….
And speaking of Amazing Dogs, if you are a Facebook follower, you can look for a contest that is going on right now called the World’s Most Amazing Dog. Now I must say, Einstein could probably be taught to do a LOT of the tricks I have seen.  And some are far from amazing.  There was a dog who could balance a bunch of cookies on his head (Episode 4). Sorry, but I wasn’t that impressed.  Now if he tossed his head back and ate them all in one bite, THAT would be amazing.  Mind you, he did look cute staring upward at the stuff on his head.
Then you have the typical dog opening the fridge and getting a beer.  As IF my human would EVER teach us to open the fridge.  Need I say more.
I’m not exactly sure how all this voting goes – but the grand prize is $100,000.  That would buy a lot of treats.  And by the way, I didn’t see any blog writing dogs.  Just saying.
OK.  Time to get her out again.  It was icy yesterday, but we managed to waddle all the way down the road.  Well, my human waddled. We trotted.  And slid.  Just making it home with no one falling was amazing.  Hey – there’s a trick for that contest.  Winter weather walking in Nova Scotia.
Have a good one.  Peace and paws up.
Seizure free days: 25