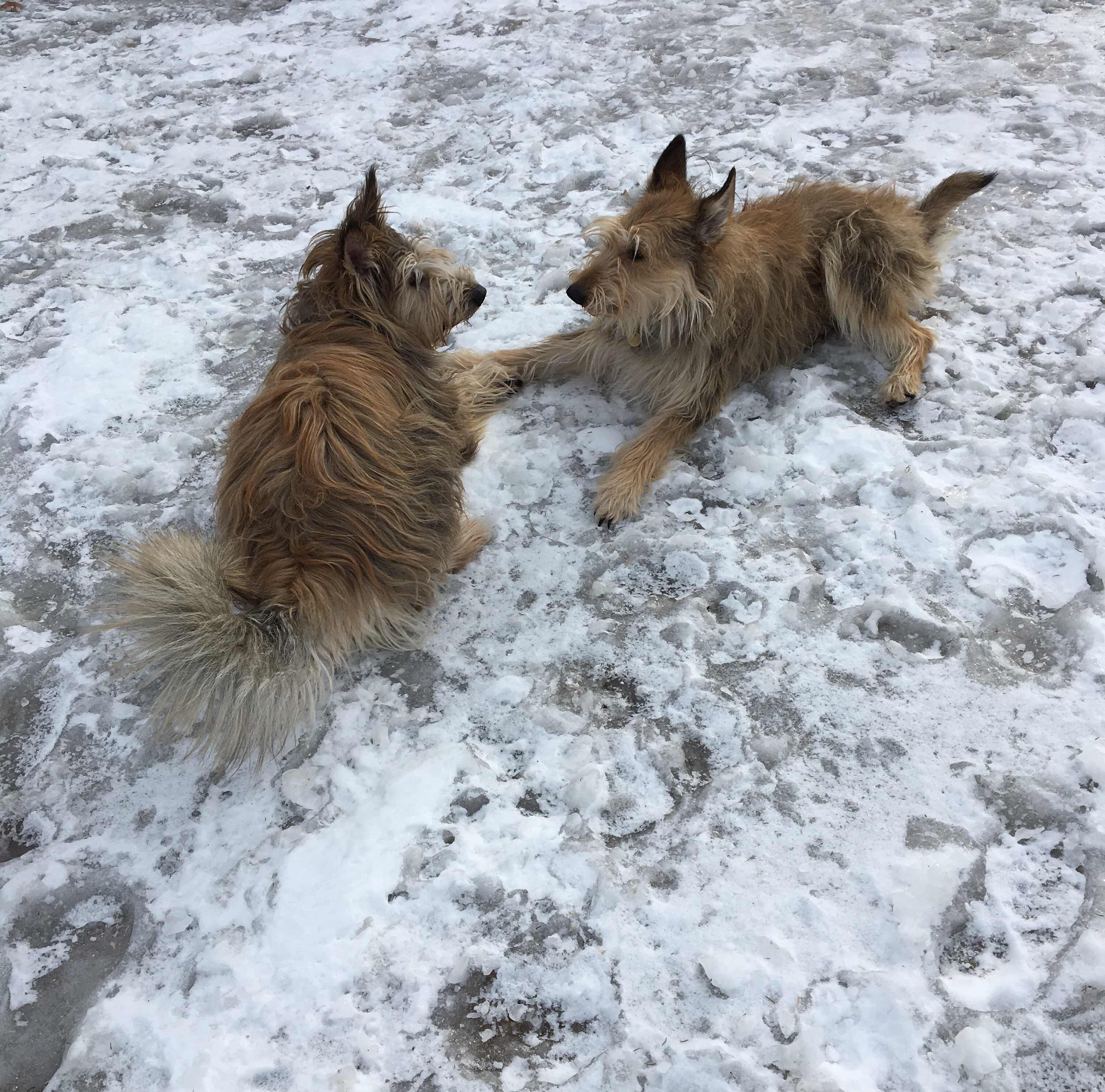 So he wasn’t really an attentive date.  But he still had a good time….

So yesterday, the FG had a special play date- with none other than Willow- another Picard!!!  Willow is one of probably only four Picards (including the FG) that live in the whole province.  Well- at least four we know of.  She’s a very pretty girl – and my human has always wanted to meet her. So she and Willow’s human arranged a play date at the baseball diamond.
Willow arrived and the FG’s brain exploded.  It was like – “hey – one of my kind!!!!”   They did the introductory sniffing dance and then began the Picard pirouette- where they basically go up on their hind legs and jump on one another.  And then they would lie down – like you see in the photo.  They then proceeded to run around the perimeter of the field, checking out all the great smells.  And all was going fine.  And then Farley arrived.
Farley is a multi-breed dog who weighs about 90 lbs.  His human shouted the “he’s friendly” line as he entered the fenced field. Farley is part collie, part German Shepherd, and part something else big.  Probably moose.   The FG and Willow sized him up, and both agreed he could stay.  Bad move.
The FG decided Farley could really put up with his tough play, so he totally ditched his cute date, and ran off playing wrestling and boxing games with Farley.  Poor Willow watched in dismay as her date ignored her.   Then, ANOTHER dog arrived – a HUGE Rhodesian Ridgeback.   What started out as a wonderful idea, was now becoming my human’s worst dog nightmare.  We don’t DO dog parks.  You KNOW how she never lets us in the ball field if strange dogs are there.  And while she totally trusted Willow, and Farley seemed OK, one worries when numbers are increasing – and the dogs are unknown.  The new human shouted the “he’s friendly” line, but my human held her breath and had the FG’s leash ready to lasso him if necessary.   No reason to stress.  The FG and Farley checked the new arrival’s credentials and then went back to continue their boxing match.  They didn’t care about the Rhodesian, whose name they never even caught- because he hung out with his human.  And the other humans.   So you had four humans, a Picard and a Rhodesian, standing and watching the FG and Farley exhausting themselves.  The only two dogs getting any exercise.  Farley’s owner said he was a rescue, who never comes when called.  The FG had met a kindred spirit.  Great.  Two bad dogs.  After over an hour of watching the WWF, my human tried to go and retrieve her dog.  At one point he stopped to lie down- he was STARTING to get a BIT tired – so she nabbed him. He was soaking wet – from rolling in God knows what and from Farley drool. My human wanted to get a photo of the FG and Willow- besides the photo you see above (pre-Farley).  Willow wasn’t all that enamoured with getting close to the FG now – and who could blame her – he looked like a drowned coyote and smelled a bit rank as well.   Note her leaning away from him: 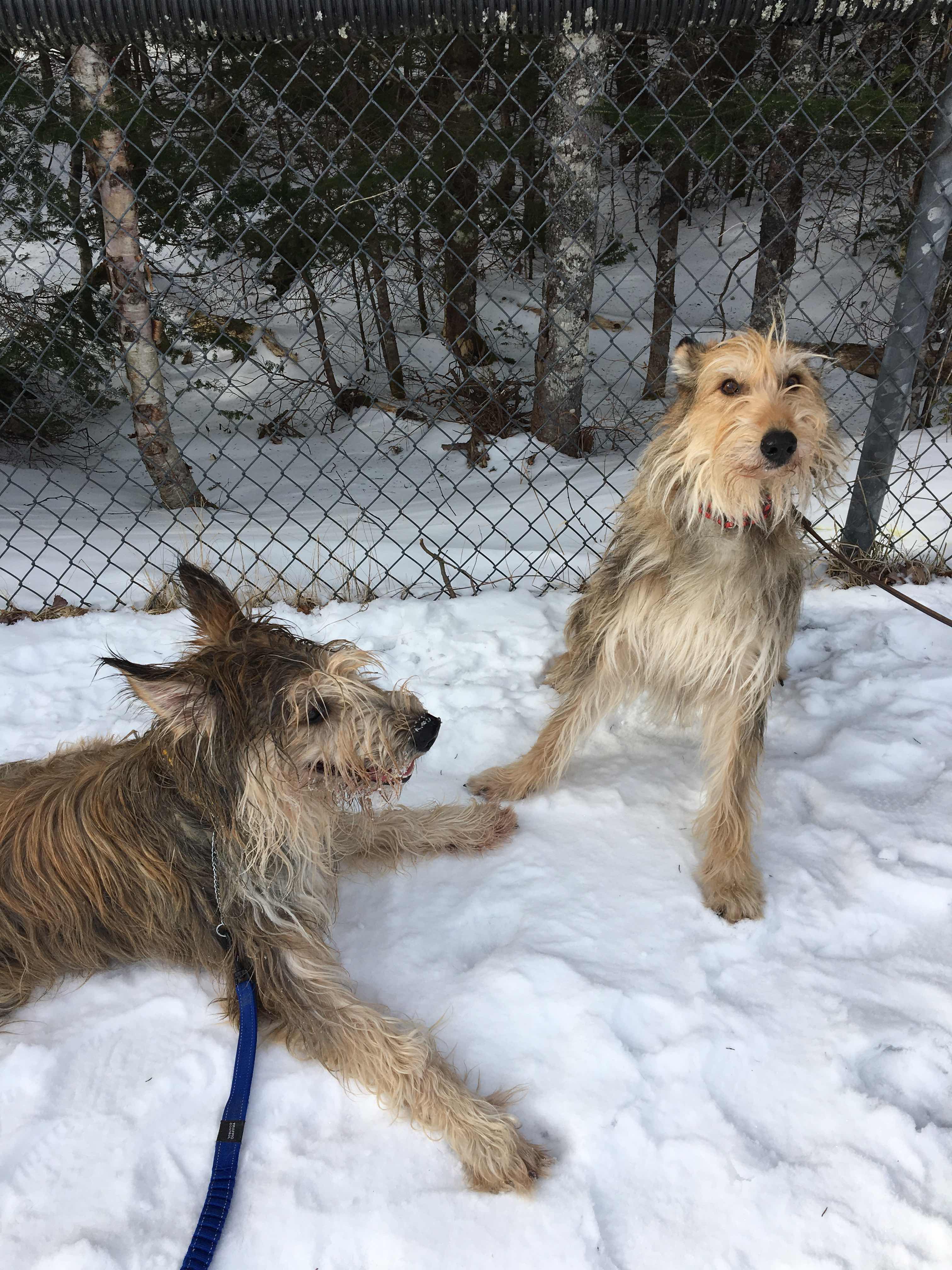 Not to mention that while trying to get the photo,   they had to fend off Farley who now decided that Willow was his next wrestling buddy and who took her on a run around the perimeter- while the FG moaned because he was now on leash.
When they circled back, Willow’s human was able to grab Farley for his human – because his human reportedly could have been there for a LONG time trying to capture him.
They then did manage to get a photo of all four of them, once Farley was back on leash.  His human kindly took the photo. Note the slumped exhausted wet coyote and the pretty, pert, OBEDIENT Picard… 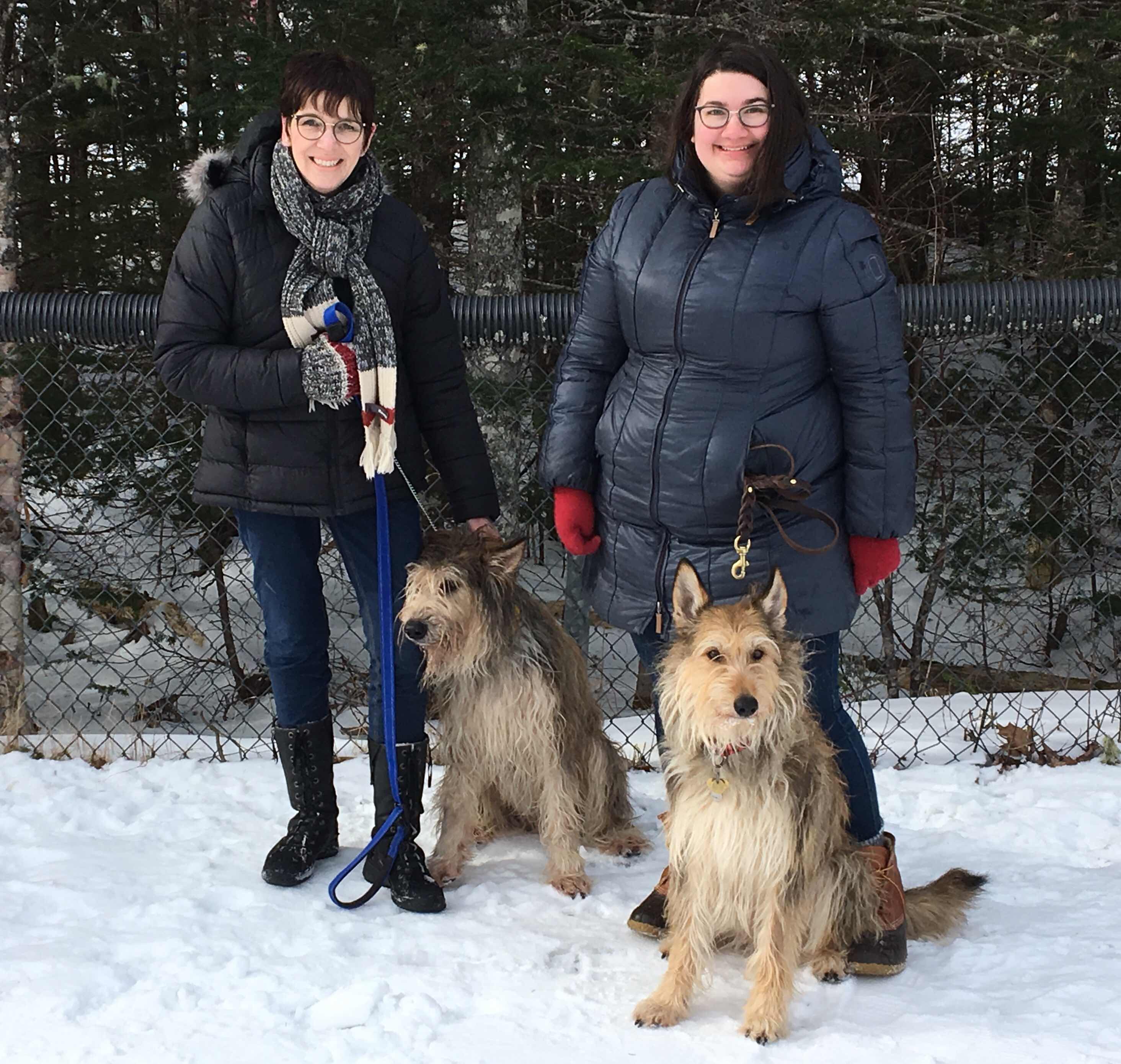 My human and Willow’s human agreed that they would meet up again some time.  The FG and Willow would no doubt have fun together.   And they DID like each other.   She’s just a bit more cautious about entering into full on wrestling on the first date.
And although he really was a very nice dog, Farley won’t be invited the next time. You really don’t need a third wheel on a date.
Have a good one. Peace and paws up.
Seizure free days: 21