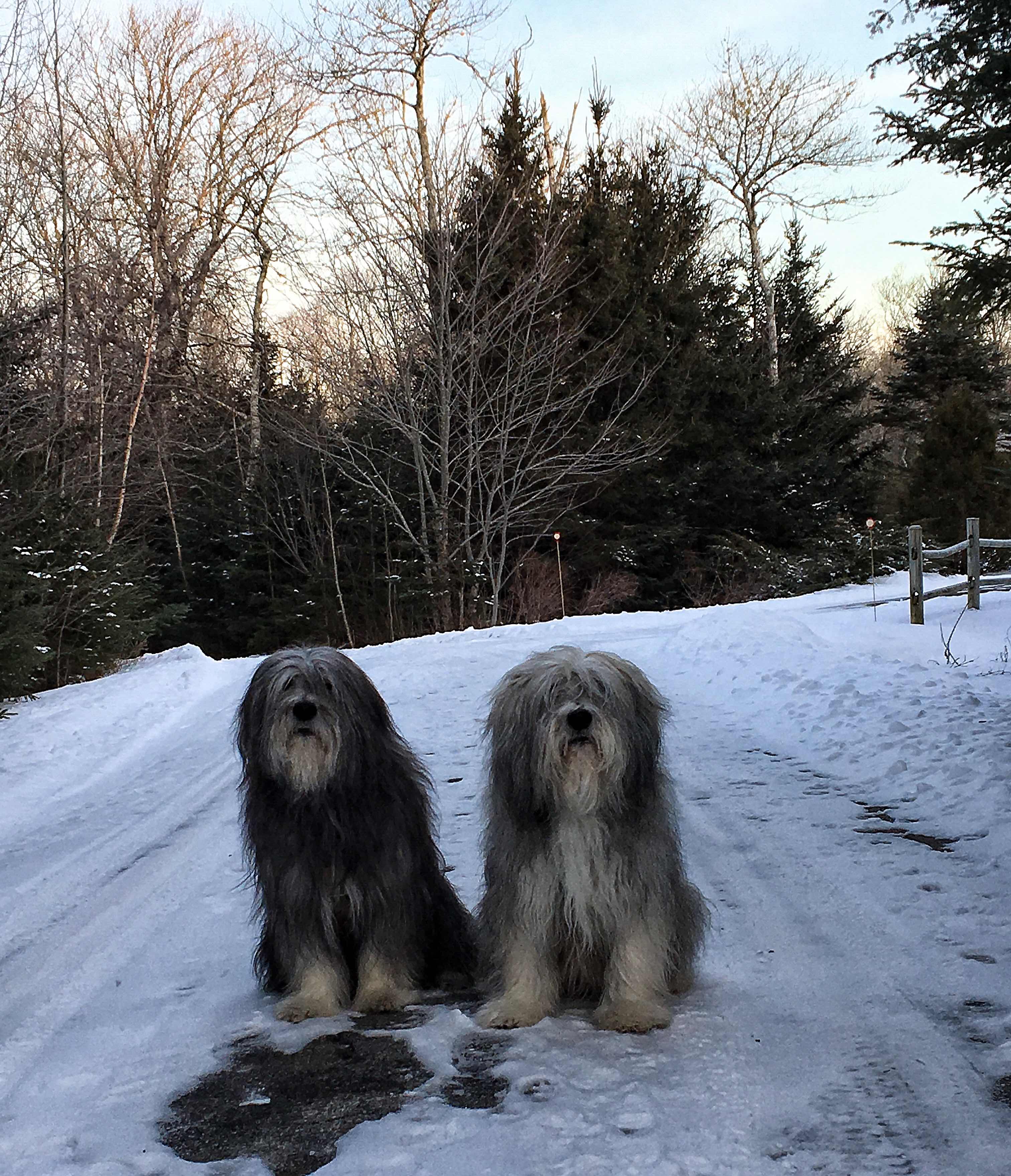 So we had some SPECIAL weather Sunday night.  When we went to bed, there was snow/freezing rain and a wind warning.  We peed very quickly for our last pee of the night.

My human, much to our surprise, decided to sleep on the couch in the DFZ.  She was super tired and for some odd reason didn’t want three dogs jumping on and off the bed all night.  She does that every now and then – when she wants a good night’s sleep.  Personally, I think sleeping is overrated- but then I do get to sleep for hours every day.
Anyway at 2:30 AM, my human was awakened by a sudden beeping sound.  Einstein jumped up and started barking.  The beeping stopped.  She had to put on her glasses because she can’t hear without them.  I know- glasses are for seeing- but she needed them to determine where the beep had come from.  Silence.  Silence.  Silence.  She decided to let each one of us out in the dog run for a quick pee.  Not all of us at the same time.  I have this new loud attack game with Einstein when we go out there- and we can be heard for a long distance.  So my human figured the neighbors didn’t need a 2:30 AM PON alarm.  So out we went.  One by one.  When we came back in, she went to investigate where the beeping had come from.  She was starting to think maybe she had dreamed it.  But Einstein heard it too. She took him on patrol downstairs- to check the smoke alarms, the furnace and the water filtration system.  Which sometimes beeps if the bulb burns out. No signs of anything odd.
As they were coming back up, she heard the beeps again, three in a row.  Like the beeps from our house alarm.  She went in the garage and looked at the smoke alarm there.  Does it ALWAYS flash green?  She figured that was the problem.  So she got a ladder and went to take it apart.  Beepbeepbeepbeepbeepbeepbeepbeepbeepbeep.  The house alarm went crazy – just like it would before the sirens would go off.  Meanwhile we canines were racing around wondering what to do.  She jammed the smoke alarm back together and raced down the ladder.  She quickly put in the alarm code.  The beeping stopped.  So she called the alarm people to let them know it was a false alarm.  That’s all we needed – the fire department or police at our door in the middle of a storm. She also realized she had never changed our phone number with the alarm company – so if they tried to call, they wouldn’t get anyone.  She told the dispatcher that all was fine.
She hung up, and she heard the beep again. The panel on the security system.  Why she didn’t check that in the first place, I don’t know.  Mind you, humans at 2:30AM cannot be trusted to make smart decisions.  I should have taken advantage and pretended it was breakfast time.  I suppose she wasn’t THAT dozy.
She looked at the panel and it signaled something with the bedroom window.  So she went to check and sure enough, the window sensor was not touching the contact.  This happened once before.  She jiggled the thing, came back to the panel, and all was good.  And no more beeps.
By this time, it was 3:15, so we figured we might as well just stay up.  Imagine our utter disappointment when she said “Go back to sleep.”  Mind you, we PONs were not in a huge hurry to go out – we heard that pouring icy rain.
We did go back to sleep – and we actually let my human sleep in until 7AM!!!!!
But my human’s day did not exactly get better….
The plow guy had come  in the middle of the night.  It continued to snow/rain after he was here.  When we went out for our SHORT walks at 7 AM,  we found a driveway covered in two inches of heavy HEAVY slush.  Frankly, we PONs were  appalled.  Who likes wet slushy feet?! Not us.  The FG didn’t care.  So after breakfast, my human went out to try and move the 4000 tons of slush around.  She figured the plow guy had come once, so he wouldn’t be back again.  We barked out instructions as she struggled to stay upright on the slippery, slushy surface.  She thought for .06 seconds about letting us run around outside while she was working, but she had visions of chasing us in the woods. I’m not sure why she didn’t just let us out in the run. Could be because Einstein would have been barking nonstop – so she decided we were better off indoors.  She pushed, pulled and dragged slush. Her socks were wet in her waterproof boots.  She was sweating in the cold damp air.  She used up all the salt she had.  She worked for close to two hours. She came in and collapsed.  Just as the plow guy returned….
We were very nice to my human for the rest of the day….Isn’t winter fun?
Have a good one.  Peace and paws up.
Seizure free days:  16