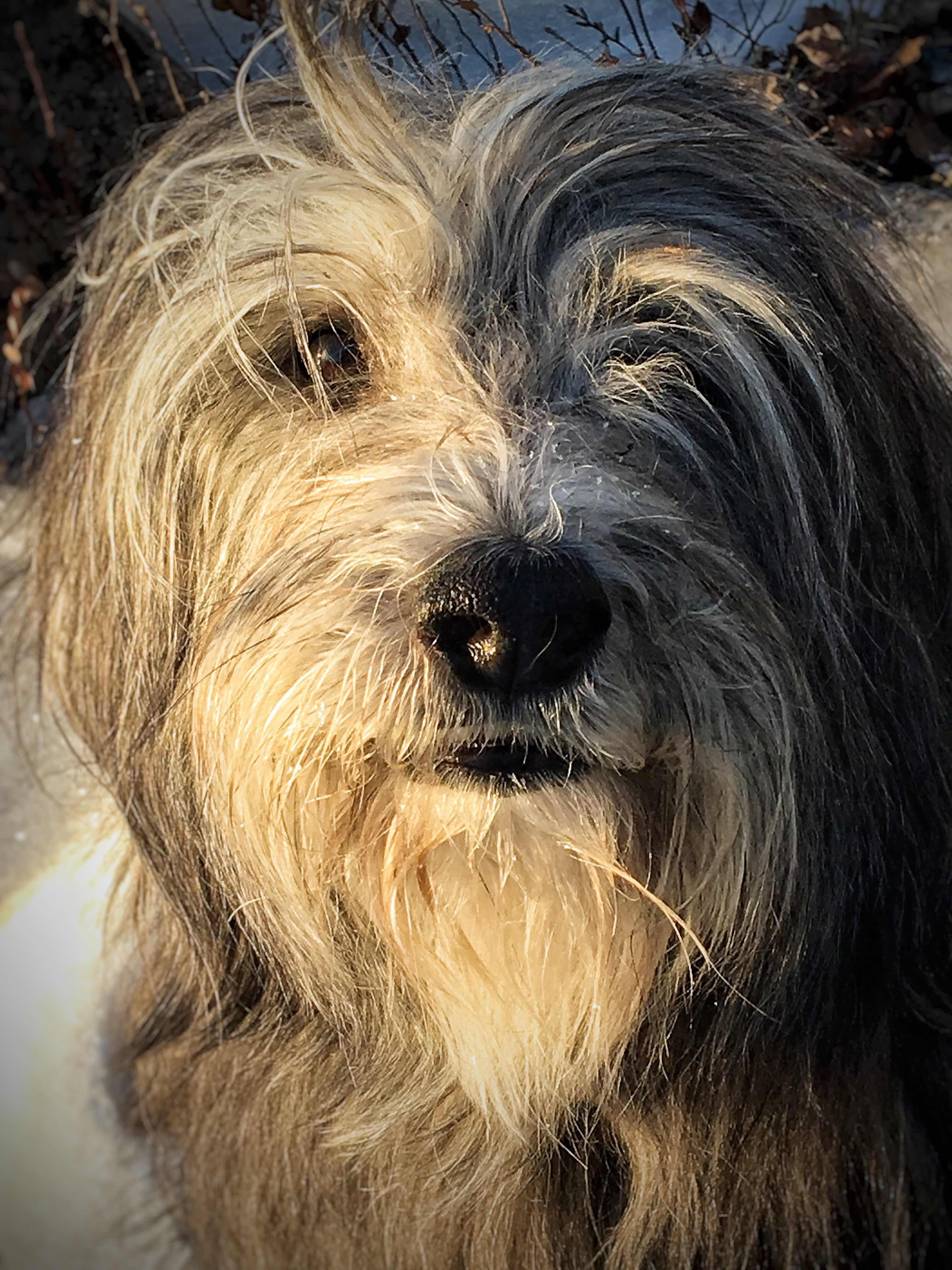 I’m not sure how the FG got so lucky – but he went on an adventure on Sunday.  Meanwhile, yours truly and Einstein got special treats- and stayed home to do guard duty.

The FG is a quick learner.  Despite the fact that he still doesn’t always sit when asked to do so.  He looks at my human like he has never heard the word.
Anyway, he could tell she was getting ready to go somewhere so when she opened the garage door, to let us go out for a pee, instead of going out into the run, he just stood by the car.  He figured, based on the fact that he went out the other day, that he would be going again. She had to drag him out to pee.
She then loaded him in Ludwig, and gave us our guilt treats. And off they went.  They only drove as far as the end of our road to the beginning of the public trail.  She took him out.  Why?  Because remember, he is poop-dictable.  She KNEW he would want to poop when they got to their destination, so she decided to do some pre-destination elimination.  Sure enough, he was out of the vehicle for less than 5 minutes and they had results.  My human scooped and deposited the bounty in the big can at the trail head.  And back in the vehicle they went.
Before they had left the house, my human had checked for dog friendly stores on-line.  She had also called one – to be sure the web info was up to date.  Let’s face it, walking in with the FG is not really an inconspicuous move- especially if dogs are NOT allowed. But this place – a building/home supply store said they allowed dogs. “But they had to be on leash.”  Can you imagine the FG OFF leash?!  That would be the end of the pet friendly policy.
Anyway, my human went in with the FG to get some kind of adhesive for some new craft project that will probably never amount to anything.  And it can join the cupboard of dried up supplies from other nonproductive projects.  Ya gotta love her.
While she was deciding what she wanted to purchase, she told the FG to sit.  He actually did, but when the decision making process took more than a minute, he slid down and made himself comfortable.  Next stop- light bulbs.  Again my human asked him to sit.  If you haven’t bought lightbulbs lately- the process can be daunting.  So as my human tried to decide what she needed, she heard someone say “Is that Elroy?”  She looked up and it was our neighbors – the humans who were owned by our old friend, Hudson.  They actually have a new companion in the household- a kitten named Phil.  We haven’t yet had the pleasure- but my human has, and she says he’s awfully cute.  But back to the FG. He greeted them, and they were frankly surprised at how well behaved he was.  Personally, I think it was the novelty – he was in shock.  So his normal insane, check-it-out, chew-on-it, pull-the-leash behavior was calmed.  And no – my human did not give him any of my CBD before they went.
They chatted with the neighbors and went to the check out, where he again behaved.  Good enough to try another store.  The pet store.
That one was pretty much a no brainer.  He goes in.  The staff know him.  He’s pretty much under control- unless he sees a fellow canine shopper.  Best to avoid those aisles.  But again, he was well behaved overall.
Back in Ludwig.  Do they DARE try a third store?  My human sat in the car and called the establishment- to see if they REALLY allowed pets.  Yup.  Chapters – the BIG book store -which is like Barnes and Noble. She was a LITTLE worried about this one.  Walking through a concrete warehouse type store or a store that caters to canines is one thing -but a library-like environment which also sells snacks and toys and other “stuff” – she just wasn’t sure how the FG would react.  But they paraded in – with more than one surprised look.
She approached a clerk to ask for a book she needed – and low and behold, it was the same person who had answered the phone and had said “we love pets”. So she was quite happy to meet the FG, who again behaved quite respectfully.  He waited patiently in the line up to pay- and only knocked over two magazines while my human was checking out.
So the FG was very successful in his adventures!! My human didn’t have to tell anyone he was a coyote-doodle.  That’s what she says when he doesn’t behave.
When they got home, she took me and Einstein down to the lake.  Or should I say she slid us down to the lake.  After all the rain, and then the freezing-well we have NEVER encountered such bad ice.  Einstein quickly figured out how to stay in the snow on the sides of the path to keep from sliding.  Me?  I like the sliding- it builds muscle. My human?  She almost resorted to crawling.  But she somehow stayed on 2 feet.
So all in all a “good dog” day.  The FG behaved and we PONs didn’t run away on our walk.  Not as if we could though, with all the ice.
Let’s see what other adventures we have this week.  And whether she REALLY starts that craft project!!!
Have a good one. Peace and paws up!
Seizure free days: 9