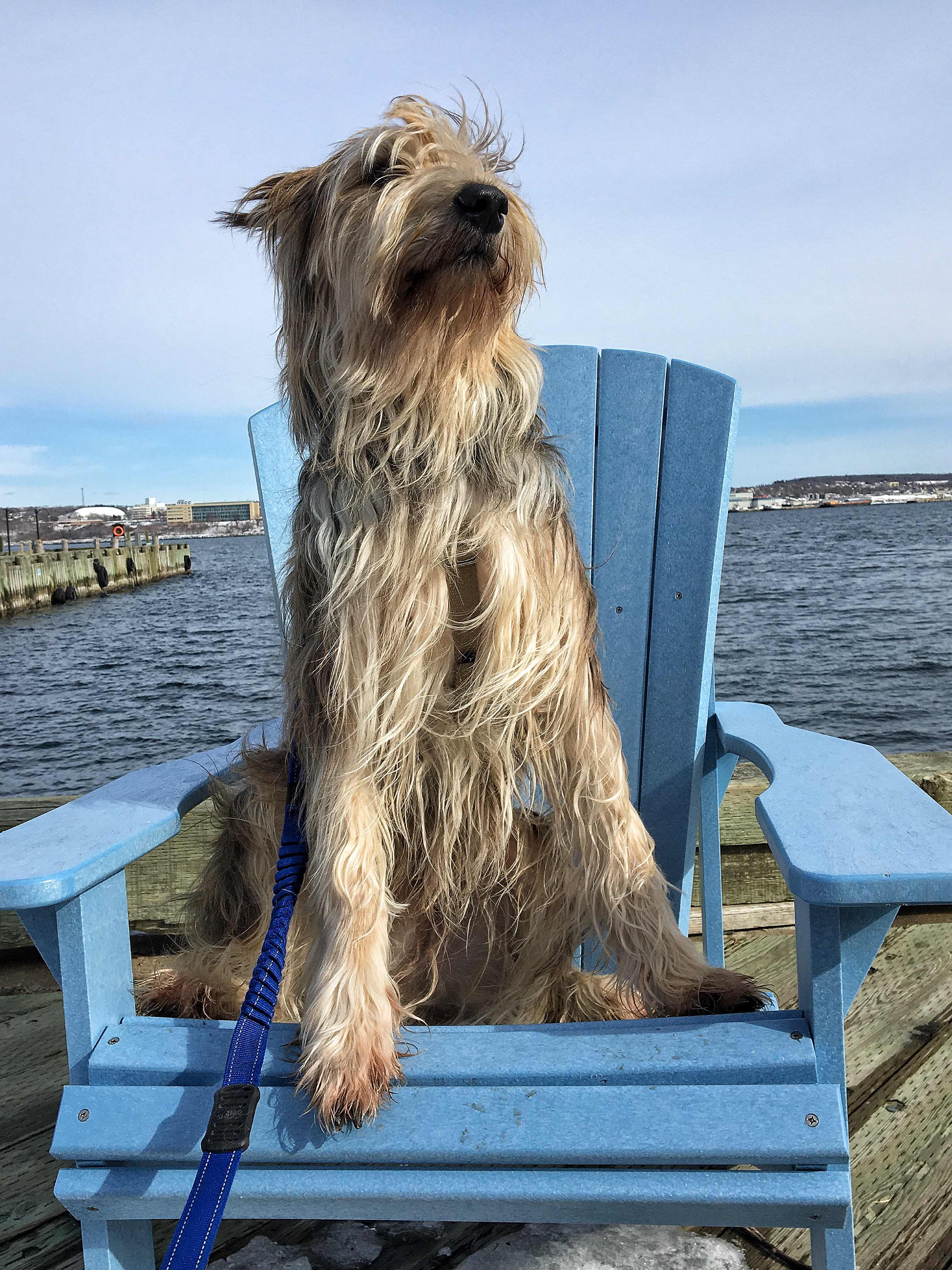 Yesterday, my human got a text from her friend, Marg, asking her if she wanted to go for a walk.  It was a nice sunny day – and a window of opportunity to get out before the rain storm that was in the forecast for last night and today.  Yup.  One day a snowstorm.  Two days later, a rain storm.  Oh and then there will be ice.  Good times. Marg suggested that canines come along.

Now my human thought for .005 seconds about taking all three of us- as she would have another set of hands. She actually thought about taking all of us to the ball field.  BUT – the snow had a fine coating of ice – and she envisioned one of us tearing a muscle in our typical crazed ball field state.  So she suggested to Marg that they go to the boardwalk on the waterfront downtown- and she would just take one of us. The FG’s name was drawn.  Einstein and I got extra treats while they headed out.
They picked up Marg and drove downtown.  They parked and headed for the boardwalk.  As my human predicted, the FG pooped within 5 minutes of starting the walk.  He is so poop-dictable.  EVERY time he goes downtown, he gets SO excited, he has to poop.  Right in front of the Farmers Market.  Every time.
Anyway, my human was prepared with 45 poop bags, so no problem with scooping. They walked down the waterfront and had a lovely time.  Until they headed back.
The boardwalk was clear of ice and snow.  But at one point, they cut through a parking lot, and found they needed to walk across a snowy area.  An icy, snowy area.  Marg started walking one direction while my human went another direction, plotting her route, and trying to keep the FG from pulling on the icy surface.  She was busy looking down and she heard a clunk.  She looked up and saw Marg sprawled out on the ice.  “OMG – are you Ok??????” she asked, “did you hit your head?????” Marg said said no but lay on the ice- for a few seconds – although it seemed like minutes.  The FG, seeing the downed friend, suddenly decided he was Lassie and wanted nothing more than to go over to her.   He was squeaking and pulling and my human could barely hold onto him.  She felt helpless- she couldn’t approach her friend for fear Lassie would add to her injuries.  So she just stood there like a useless statue, trying to stay still on the icy surface with the crazed Picard, asking again if her friend was OK and if she thought she broke anything.
THANKFULLY, Marg was OK.  She got up slowly – and will no doubt be bruised, but they didn’t need to call 911.  The FG was quite happy to see her get up.  And of course, so was my human!!!  Thank goodness for big puffy coats.
They continued on their journey back to the vehicle and Lassie actually behaved quite well.  He DOES try to say hello to pretty much everyone who passes by – he would make a good politician.  When Marg went into the market to get some fish, the clerk had to come out to meet him.  Yup – he’s a pretty good ambassador. When he’s not chewing on carpets. Or pooping in the most conspicuous locations.
Marg has offered to come with all three of us to the ball field when the ice clears.  My human explained that even without ice, she will be required to wear a helmet and sign a waiver. Oh – and she needs to wear ear protection – for barking.  She still said yes.  Let this be evidence that she has been forewarned.
Today we have rain which is supposed to last until this afternoon.  It’s Saturday- but every day feels like Saturday now.  My human says that we need to let her sleep in until after 5AM.  I still say Carpe Diem….Speaking of which – time to go out.  Although… I do hear that rain….
Have a good one. Peace and paws up.
Seizure free days: 6