Well the cable guy came yesterday.  So he could fix the TV channel that Westminster is on.  Or should I say WAS on. At this point it’s moot.  Unless some Royal decides to get married, my human probably won’t have the TV on again until next Westminster.  I know – we shouldn’t even BOTHER with cable TV.  But it was a “bundle” when we got our new internet service.  It was cheaper to get “the bundle”.  Go figure. Kind of like buying dog biscuits in bulk.

Anyway, as he made his way around the house, we were pitifully sequestered on the deck.  Not to worry – it wasn’t THAT cold.  But we smashed our faces against the deck door, and when Einstein barked, and the FG continually scraped at the screen door ( which will definitely need replacement this spring) and I squeaked like someone forgot to feed me breakfast – my human had to let us in. The unfamiliar repair guy said “oh that’s ok- they can be inside.”  My human said “ummmm I think I’ll just put them in the bedroom.  Do you need access to that TV any more?”  He said no- so while he was in the garage, she corralled us and tricked us to going into the bedroom.  She put a raggedy gate against the door and told us to settle down.  As IF we could.  Come on.  There’s some stranger who has never been victim to our over exuberant welcoming behavior?!  (Read: incessant barking and bouncing off said victim). We all stayed like sentries at the gate, while the FG made an incessant squeaking sound. Kind of like nails on a chalkboard.  Every now and then he also let out a big dog bark. Just to mix things up. 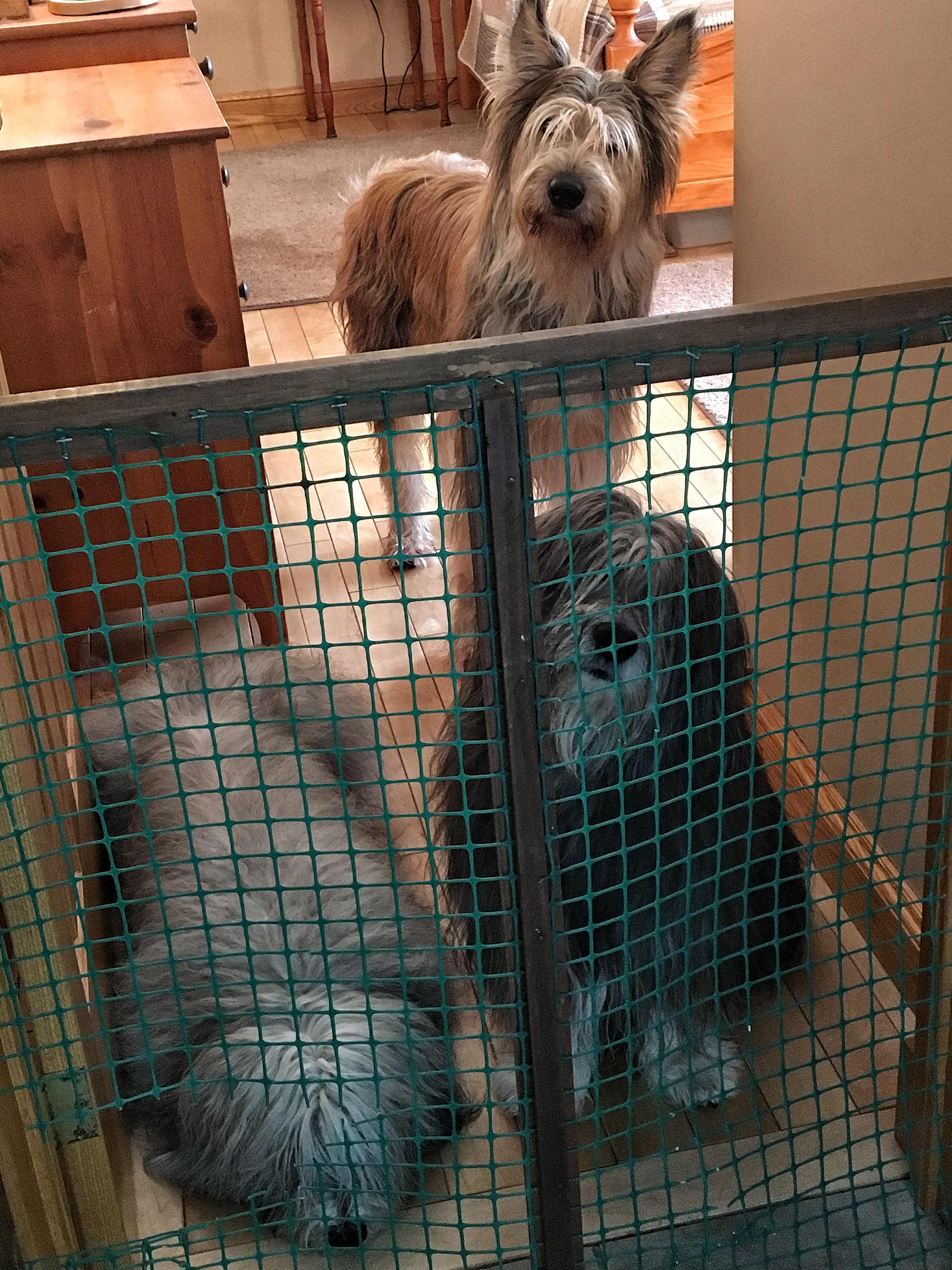 So buddy left and we did a thorough inspection of all his work.  He claimed they needed to change some wiring to the house which would require several guys and a bucket truck.  Now THAT would be fun.  We LOVE the sound of big trucks.  You should see what happens when Einstein hears the beep-beep-beep reverse sound of a truck -even a recording of that sound.  It reminds him of the oil delivery truck.  So he goes CRAZY.  The idea of a bucket truck was so cool.  We got all excited about the idea.  And then buddy came BACK.
He said he figured out another idea as he left.  I think he called someone for help.  And they told him what to do.  So back in the bedroom we went.  He went back in the garage and did something.  “There he said- the problem is fixed!”  “Great” my human said.  “So no bucket truck?!”  “Nope” he said, as we canines all frowned.
He was ready to go out the door, and now my human realized the Internet was not working.  Good think she noticed before he left.  I’m not kidding.  You can’t make this up.  He did the highly technical procedure of unplugging the modem and plugging it back in.  Nope.  No WiFi.  By this time, my human was starting to lose faith- and wondering if she should have just left the TV alone.  Westminster was over.
The good news was that we settled down.  We realized this could be a long process- and by now we were  getting tired. We watched him as he made numerous trips to the garage and then downstairs. After about 20 minutes he announced that everything was working- and no need for the bucket truck.  Darn.
After he left, the FG walked around squeaking- he was crushed that he didn’t get to say hello. We PONs were just glad he was gone.
So all of our technology is working.  For now anyway. Paws crossed it stays that way…Personally, I think Einstein could have probably repaired it himself.  He’s smart enough….
Have a good one. Peace and paws up!
Seizure free days: 5