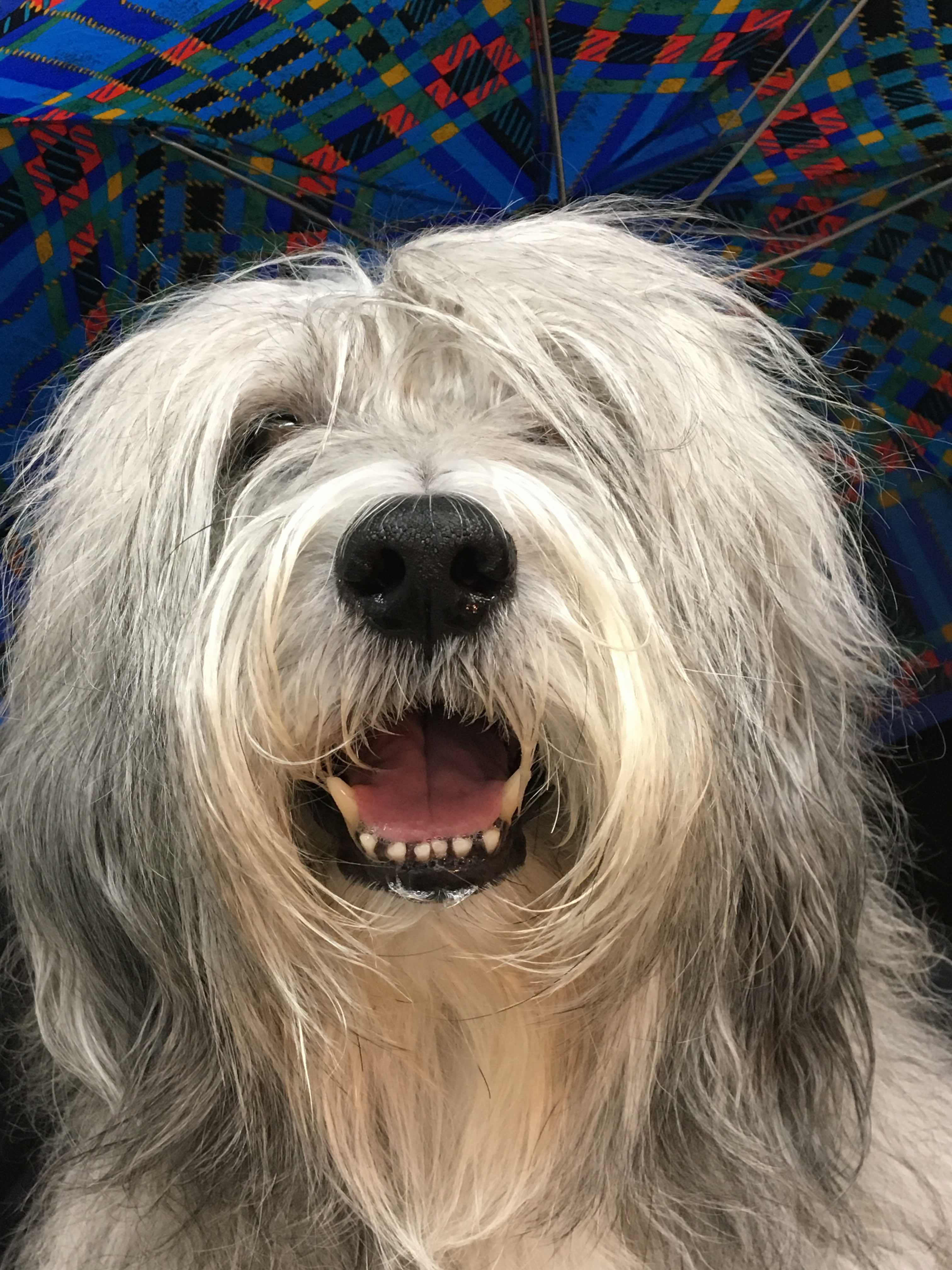 The parts of this object include a top spring, a bottom spring, stretchers, ribs and a ferrule.  Know what it is? Of course you do – it’s an umbrella!  And today, February 10, is Umbrella day. A day to celebrate that rain shielding device that has been around since 21 AD.  The umbrella is a relative of the parasol- with one shielding against rain and the other shielding against the sun.

A little search of the net revealed that there is such a thing as a dog umbrella.  Here ya go:
https://youtu.be/F8RyWF8vo5s
OK.  I must say we laughed hysterically in this house when we saw this.  Clearly this is for smallish dogs.  Imagine walking a Great Dane with one.  You would need really long arms.  But the better vision is of my human walking us two PONs – with one for each of us. The walking alone would be a challenge- but picture stopping to pick up poop.  On a windy day.  Oh the image…. She’s big on trying new things – but we are definitely giving this one a pass.  Mind you – it COULD make an entertaining video….
Umbrellas and dogs have another link because they are actually used as part of canine Temperament Testing.  Temperament testing gives insight into a dog’s behavior and measures things like shyness, aggressiveness, and friendliness.  During the test, the dog is exposed to a variety of situations- and the dog is evaluated on his reaction to each one.  Situations include greeting a friendly stranger, reacting to loud sounds (like someone banging on a pot), walking on uneven footing, encountering an unfriendly, threatening stranger and reacting to a surprising stimulus – which is an umbrella opening before the dog.  The test looks at the dog’s reaction to these things and his ability to recover without excessive shyness or aggression.  Depending on the breed, the evaluators may  have slightly different expectations- but the bottom line is that all dogs must be under control at all times.  Here’s a link that tells you about testing and even has a video of a dog being tested.
https://atts.org/
When we searched for other Temperament Testing videos, we found one that was labeled as Failed.  Can you imagine having your failed video on-line for all the world to see?  And here it is (I know – I’m sharing their embarrassment too).  But REALLY – he isn’t that bad.  He needs some work, and practice.  He failed because he wouldn’t walk over the uneven surface.  He also had no reaction to the threatening individual- who you can’t see in the video.  The dog was more interested in the water.  He didn’t shy away from the umbrella at all.
https://youtu.be/HMcYAhXnHKg
I’m not sure how we would do in the test.  We would probably be fine with the umbrella.  But pull out a lint roller – and we would be GONE.  We all have a dislike for the lint roller.  And not because my human has used it on us.  It started with one of us sniffing it, not liking the sticky feeling, jumping away – and now we ALL have that reaction!  Hold up the lint roller and it’s a bark-a-thon.  Give us an umbrella any day!
Have a good one. Peace and paws up!
Seizure free days: 0
Sadly the counter has again returned to zero.  I have an appointment with my Vet on Monday morning.   We have to figure this out…