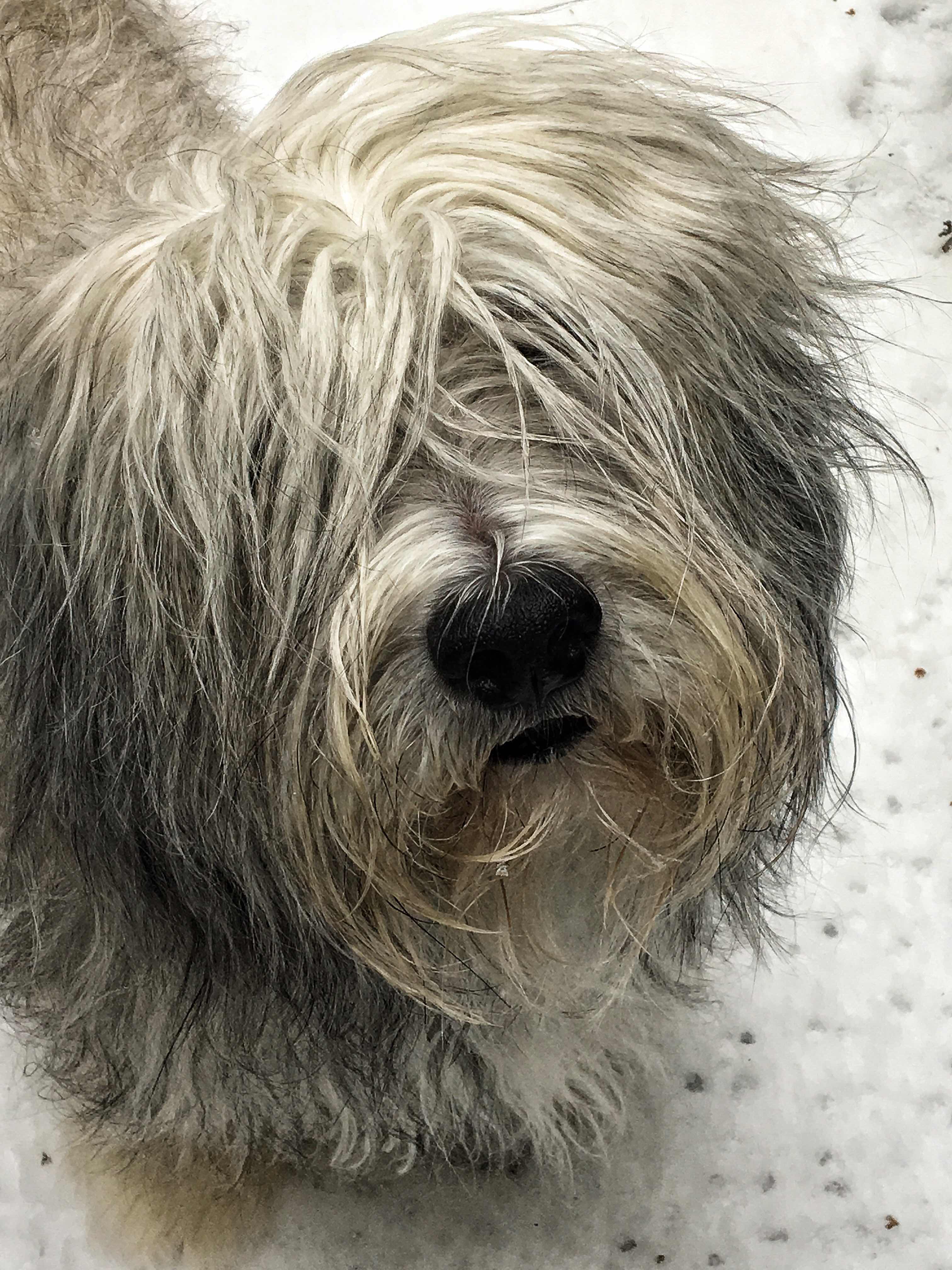 Well, well, well.  It’s about time.  Someone got in trouble – and here’s a clue – it wasn’t me or the FG.  And I must say I am feeling just a little bit smug about the whole thing.  Frankly, I have been feeling a BIT tired about hearing how “good” Einstein is.  He poses wherever my human wants.  He doesn’t need a leash in the morning because HE won’t take off.  He comes when my human calls.  He poops on command.  Bla Bla. Bla.  Well, yesterday he pulled a REALLY good one.  Or bad one from my human’s point of view.

We went out for super short walks around the house in the morning in the dark because it is still crazy icy out.  The FG went out first on a leash and did his thing.  Then Einstein and I went out.  He wasn’t on a leash – but yours truly was.   My human instructed Einstein to “hurry up” and he quickly complied.  I take longer because I have to sniff the ground for any wildlife that may have been through the night before.  We went back in the house for breakfast.  All was going perfectly.  The FG even ate ALL his breakfast!  AND it was Friday.

Before my human leaves for work she always takes us for a quick pee.  And of course, I’m always on leash.  And usually for this venture, Einstein is also on leash – because my human doesn’t have time to goof around.  But yesterday, she didn’t bother…. I did my thing and Einstein went up the side of the driveway, out of sight.  My human called him and she FULLY expected him to come racing back.  She called again.  No Einstein.  Now she couldn’t walk up there to get him because there was a dusting of snow – and she KNEW there were patches of ice underneath – and she wouldn’t be able to see them.  She called again.  No Einstein.  She took me in the house and brought the FG out, still expecting the good dog to materialize.  Nope.  She put the FG in the house after he peed and went in the garage to get the car.  She expected that when he heard the automatic garage door open, he would come flying back.  Nope.  OK.  Now steam is coming out her ears.  She drives up to the closest neighbors’ house who she knows are currently away.  What she DOESN’T realize is that underneath that dusting of snow, their driveway is sheer ice.  As she put her foot on the brake as she approaches the house, she continues to slide toward their garage.  She throws the car out of drive and shuts her eyes.  She stops short of the garage.  She figures that Einstein has taken the shortcut to the next neighbors’ house.  She gets out of the vehicle and of course looks like Bambi on ice.  Make that Rudolph.  She’s not as small or delicate as Bambi.  She creeps slowly to the path between the two houses and looks in the next yard.  No sign of the runaway.  She creeps back to the car and slowly turns it around the the driveway.  And as she gets in the car, she hears barking.

She drives up to the ROAD and here comes Mr. GOOD dog.  Two neighbors are walking on the road – the same two who spotted the FG during HIS escape.  Einstein had been barking at THEM – and because they were thankfully heading back toward our house – he ran ahead of them.  My human jumped out of the vehicle – and Einstein looked at her sheepishly.  Good look for a Herding dog. She called him over and tossed him into the crate in the back of Ludwig.  She asked the neighbors where they first spotted him.  Apparently – he was WAY down the road at another neighbors’ place.  They said he was having a grand time running around.  They made my human feel SLIGHTLY better ( keep in mind, this is the SECOND time these same neighbors have seen runaways from our house) by telling her that they are currently dog sitting for two Cavaliers – and the day before, the GOOD dog took off too.  Must be something in the air.

We all get a treat before my human goes out the door.  Einstein didn’t get one.  The FG and and I just smiled at each other.

Never a dull moment.  Ever.

Have a good one.  Peace and paws up.
Seizure free days: 27