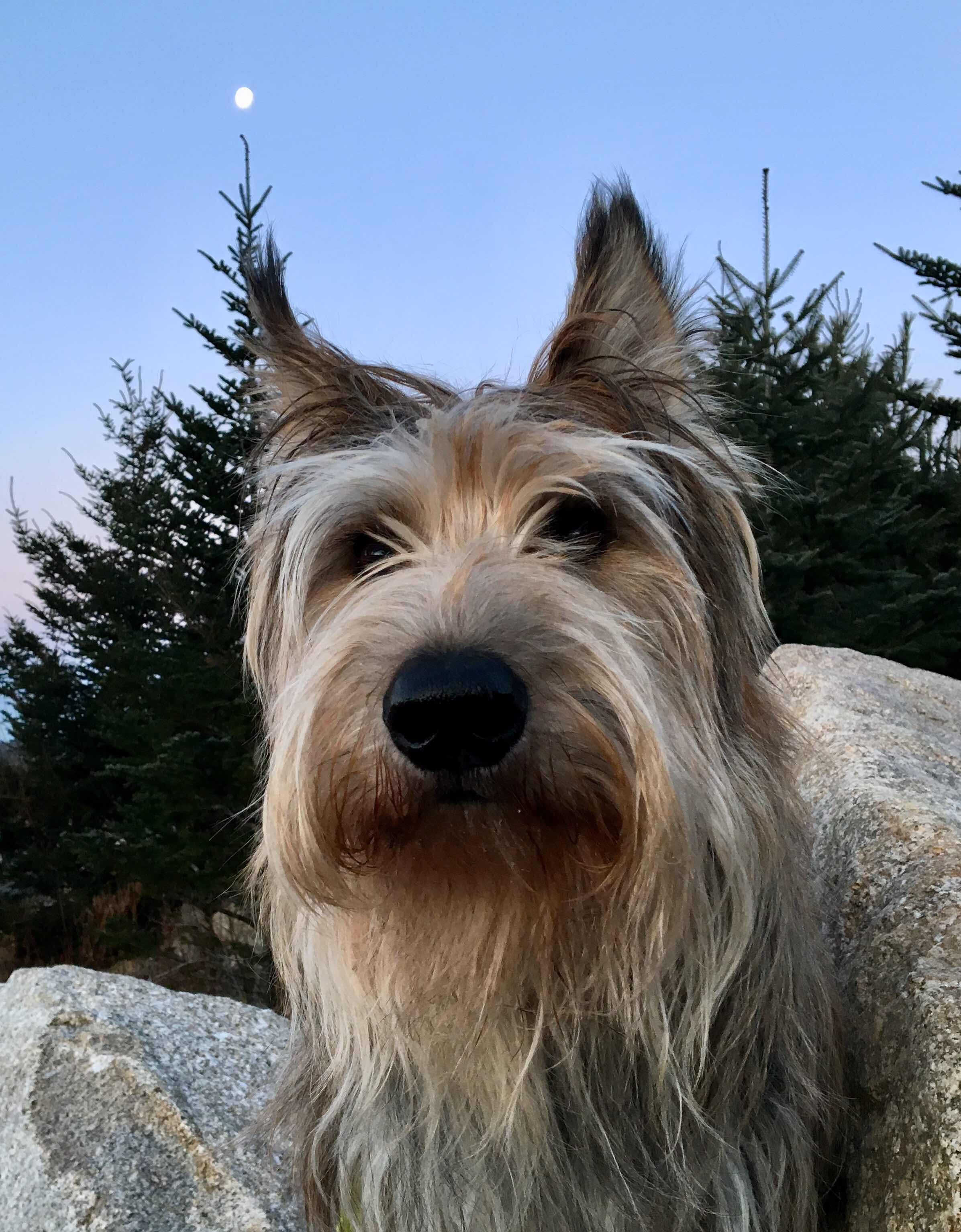 Now that Christmas is over, and it is unlikely that Santa will return to take back gifts, I can tell you a little tale about the FG.  That happened on Sunday.  Before Christmas.  I figure Santa was so busy getting ready for the big day that he overlooked some indiscretions.

We got up early (so what else is new?), came home and had breakfast.  My human also had her breakfast.  She then went in the bedroom to make the bed and tidy up.  She didn’t let us in because trying to make the bed while each of us keeps jumping on it is kind of like trying to block the flow of Niagara Falls with a paddle.  Good luck.
While she was in the room, a friend called so she sat down on the bed to chat.  After a few minutes, she heard what sounded like barking in our yard.  For some unknown reason, she didn’t have her glasses on.  As she was chatting with her friend, she looked out the window.  She said “Hey – there appears to be a pack of DOGS in my yard.  Hold on while I get my glasses.  One of them looks pretty big”. She puts her glasses on,  looks out the window and exclaims “Those are MY dogs – gotta go!!!!!!!”  She raced to the front door and realized it was open. The only thing she could figure was that it hadn’t been fully closed – and the wind blew it open.  And of course, seeing the opportunity, we all went out.
She called to us and both Frodo and I came running in.  But the FG, seeing that he was completely FREE, heard the call of the wild.  Plus he saw that my human was wearing slippers – so he knew he had a good head start.  He bolted for the backyard.  My human raced in, put on some shoes, threw on a coat, grabbed a leash, a whistle and a tug toy.
By the time she got to the backyard, he was nowhere in sight.  She took the path down to the lake and circled back to the house, futilely blowing the whistle like she was some kind of train engineer.  It OBVIOUSLY wasn’t working, but she kept blowing.  Three short bursts.  I think she was actually signaling SOS.  She followed the trail back to the house and then headed to the neighbors’ place.  No sign there.  She cut through their yard and went to the next neighbors’ place.  And there she spotted him on the edge of the woods.  And he spotted her too.  And he saw the leash. And he said “See ya.”  He raced up their driveway for the road – where my human could see two other neighbors walking. One of them is not what you would call a “dog person” so she didn’t yell for help.  Besides – the FG wasn’t even wearing a collar – so what could they do? He apparently greeted them and ran off.  When my human got to the road, he ran to the house across the road.  At one point he started running toward her, and suddenly did a total 360 and headed behind their garage.  She went around the garage from the other side, thinking she would head him off.  But he was GONE.  Must have run in the woods.  By this point she was starting to really begin to panic – so she called Jackson’s house and asked if his human could come and help her.
Within less than a minute, Jackson and his human were in their truck – and they drove to where my human was. They agreed to head for the golf course – as it was possible the FG could have headed that way.  Mind you, they both knew he could be anywhere – and he was running like a cheetah with a mousetrap caught on his tail. Just as they started to head for the course – they spotted him- at the entrance to the course.  The previous neighbor who had been walking on the road, had come up her driveway – he had apparently been at her place and she had tried to capture him too.  When he spotted my human – he froze.  You could see the wheels turning.  Run or come back.  But then he noticed something so much more appealing than my human.  Jackson. Who was right next to my human.  He came racing over to see his buddy at which point my human hurled herself on him – and threw a lasso around his neck – kind of like something you might see at a rodeo.  He was again in captivity.  The whole fiasco probably took 20 minutes, but it felt like hours to my human.
My human thanked both neighbors for their help and marched one VERY wet, muddy and stinky Picard home and right into the bathtub. Honestly, I think he thought it was worth it.
It’s funny because the FG has been very good the past few months.  He plays in the back with the fetch toys and my human has even been able to let him run free on the golf course.  But SOMETHING got into him that day – I think it was the day after the full moon.  That might explain it.  Might.
Good thing Santa doesn’t come back and recall gifts….Mind you it happened before Christmas.  Still – that FG is lucky – in more than one way!
Have a good one.  Peace and paws up!
Seizure free days:19