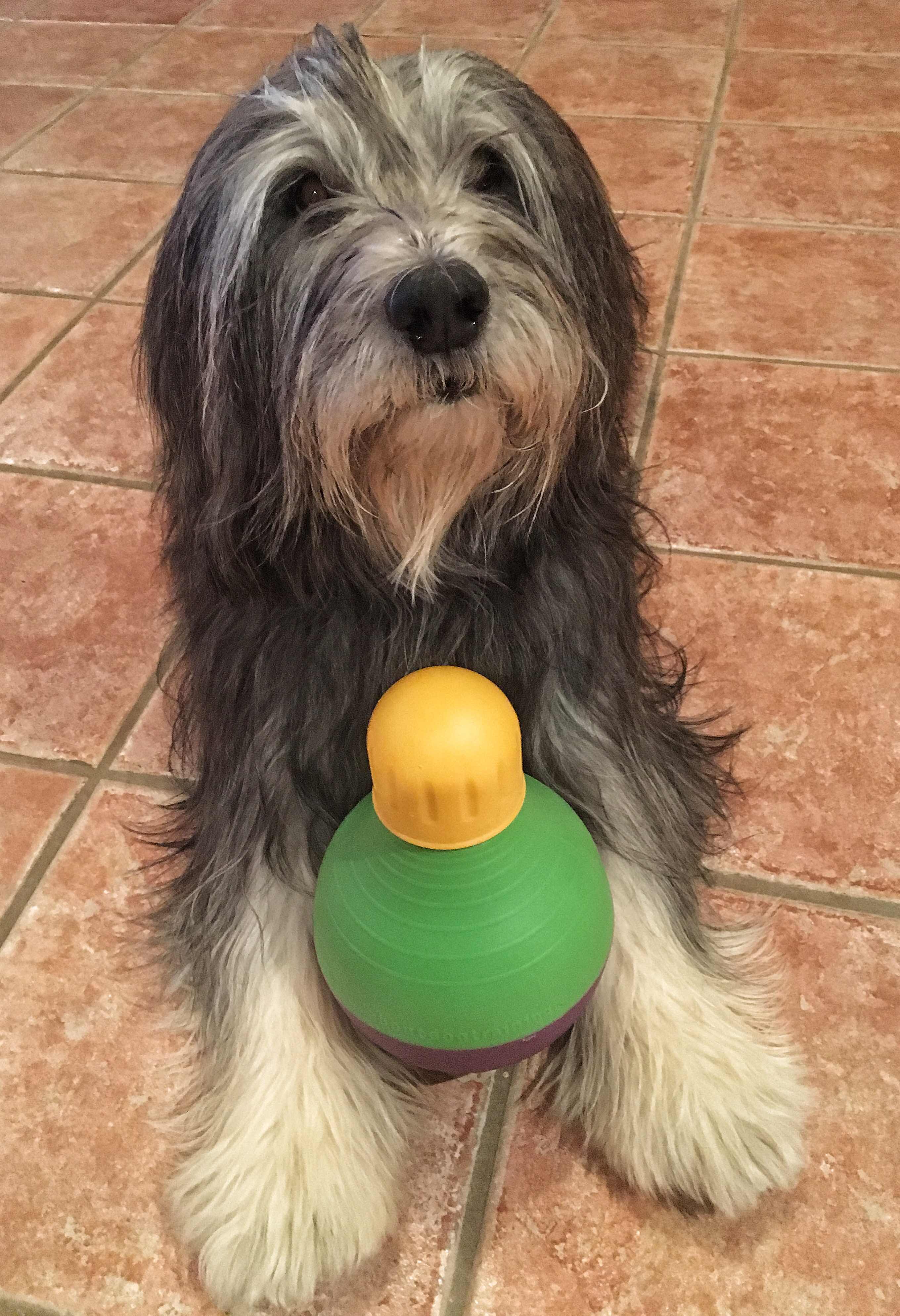 Time to tell you about our other Christmas gift.  My human had read that some other people owned by PONs really liked this toy – so unbeknownst to me she put it on my list for Santa. And we are glad she did.  It’s called a Bob-A-Lot -and it’s basically a treat dispenser.  It’s different from the Pyramid dispenser because you can adjust the flow of the treats.  We each got to play with it – one at a time- so as not to cause TOO much pandemonium.  Or is it PONdemonium when Einstein and I play?

Anyway, we played in the rec room downstairs because my human envisioned us bashing into tables with Christmas decorations – and we recall how the magi nearly met their demise the other day when we did that.
I got to go first.  Because I would have been screaming if anyone else went first.  True -its not very mannerly, but it’s the reality.  So here is my video with my technique.  With some notes.  You will see that I use speed, teeth and brains.  I’m the only one who figured out how to get the thing out of tight spots.  Like under the table tennis table that is folded in a corner.  Mind you, because of my speed, I was the only one who ended up in tight spots.  Sometimes I go so fast, I don’t even notice the treats that have fallen out.  But my human was impressed with my problem solving ability.  And flexibility.  In the background, you will hear Einstein shouting out his plea to be released from the front hall where he and the FG were sequestered.  Ah the peace and tranquility of our household.
https://youtu.be/VRJkHL-jT0Q
Next we have Einstein.  He uses his paws to bat the thing around and moves pretty quickly too.  But he does stop to look for treats. Sometimes.
https://youtu.be/9l3irfsdL-E
And last but not least, the FG.  The most quiet dog in this household (relative to us PONs) was the most vocal.  My human was wondering if he would even want to play with it – given his fussiness about food.  But he did!  He was the most methodical and he is also the most entertaining…
https://youtu.be/HpWd5LI35tU
So we give the  Bob-A-Lot two paws up!  It’s durable and entertaining.  And if Bob-A-Lot wants to send us two more, for doing this plug (so we would each have one!) – we would happily accept them!  Mind you- the thought of three of us doing this together at the same time is a bit frightening.  We could probably charge admission!
Have a good one.  Peace and paws up!
Seizure free days: 18