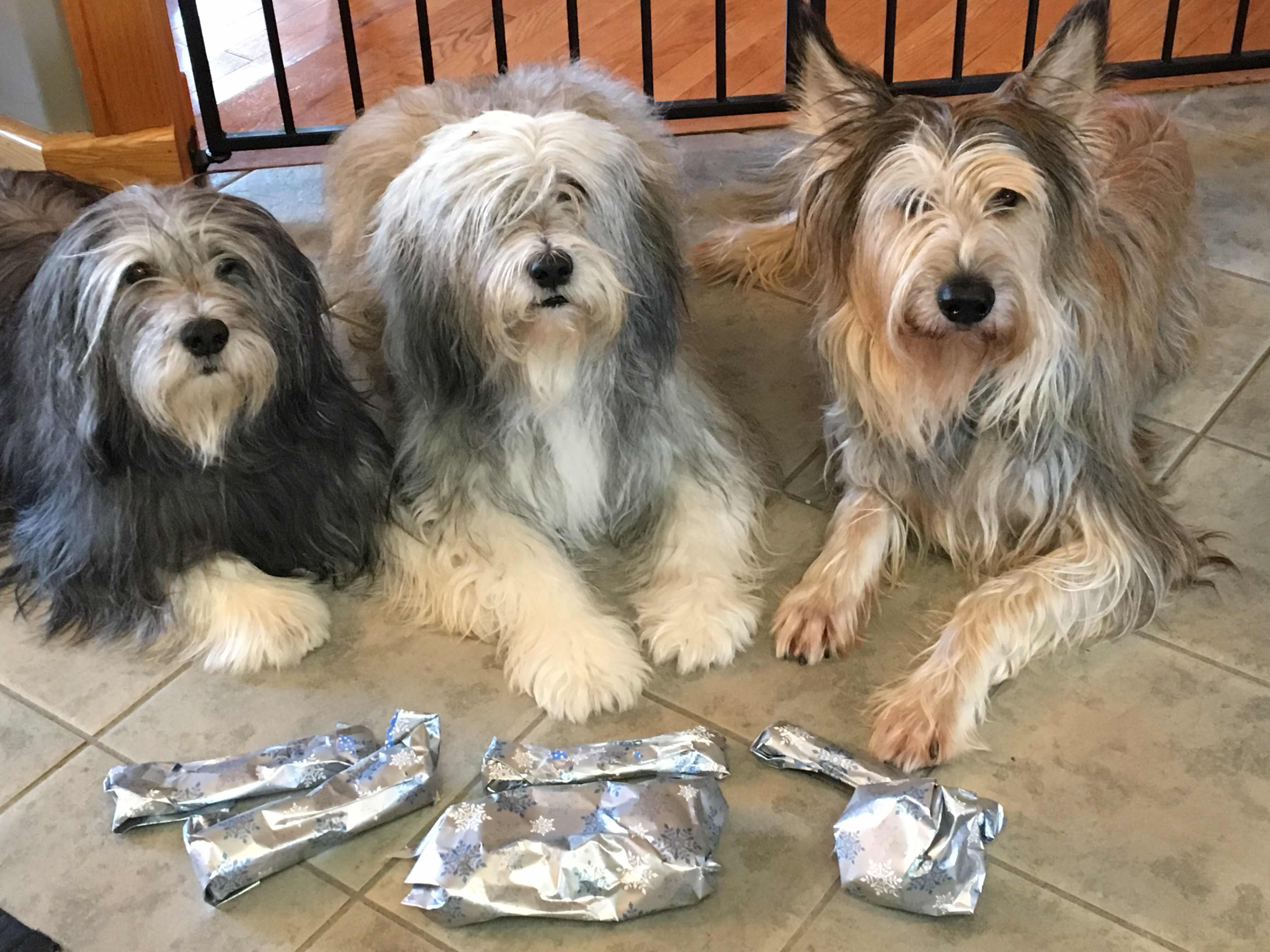 December 26.  The day after the big day. And yes indeed- we DID get presents!

My human and her sister actually went to church on Christmas Eve at midnight.  It’s hard to believe they both stayed awake- but somehow they made it through.  And THEN they opened THEIR presents.  My human said that Santa wouldn’t be bringing OUR gifts until after we went to bed.  Seems a bit sketchy to me – but to tell you the truth, we canines were unconscious by 1:30.  We knew we would be getting up at 6 AM anyway – so we needed our beauty rest.  And sure enough, even though my human didn’t go to bed until around 2:30, we were sure to get her up at 6.   Wouldn’t want her to get off her usual schedule.
The photo you see is just before we opened our gifts.  We all received another gift too – we’ll be writing about that one soon.  Anyway, the gifts depicted included an assortment of Nylabones, a rubber bone, a “tough” toy made of fire hose, and some rope toys.  We also received some TREATS!
I think my human must have given Santa the wrong list, though.  Seriously.  Anything not made of industrial steel or plastic doesn’t stand a chance in this house.  Einstein unwrapped and claimed the first rope toy.  He “hid” under the dining table and wouldn’t let anyone near him as he attempted to annihilate the thing.  He started ripping off sections of rope in less than 3.8 minutes . The first rope toy was confiscated. 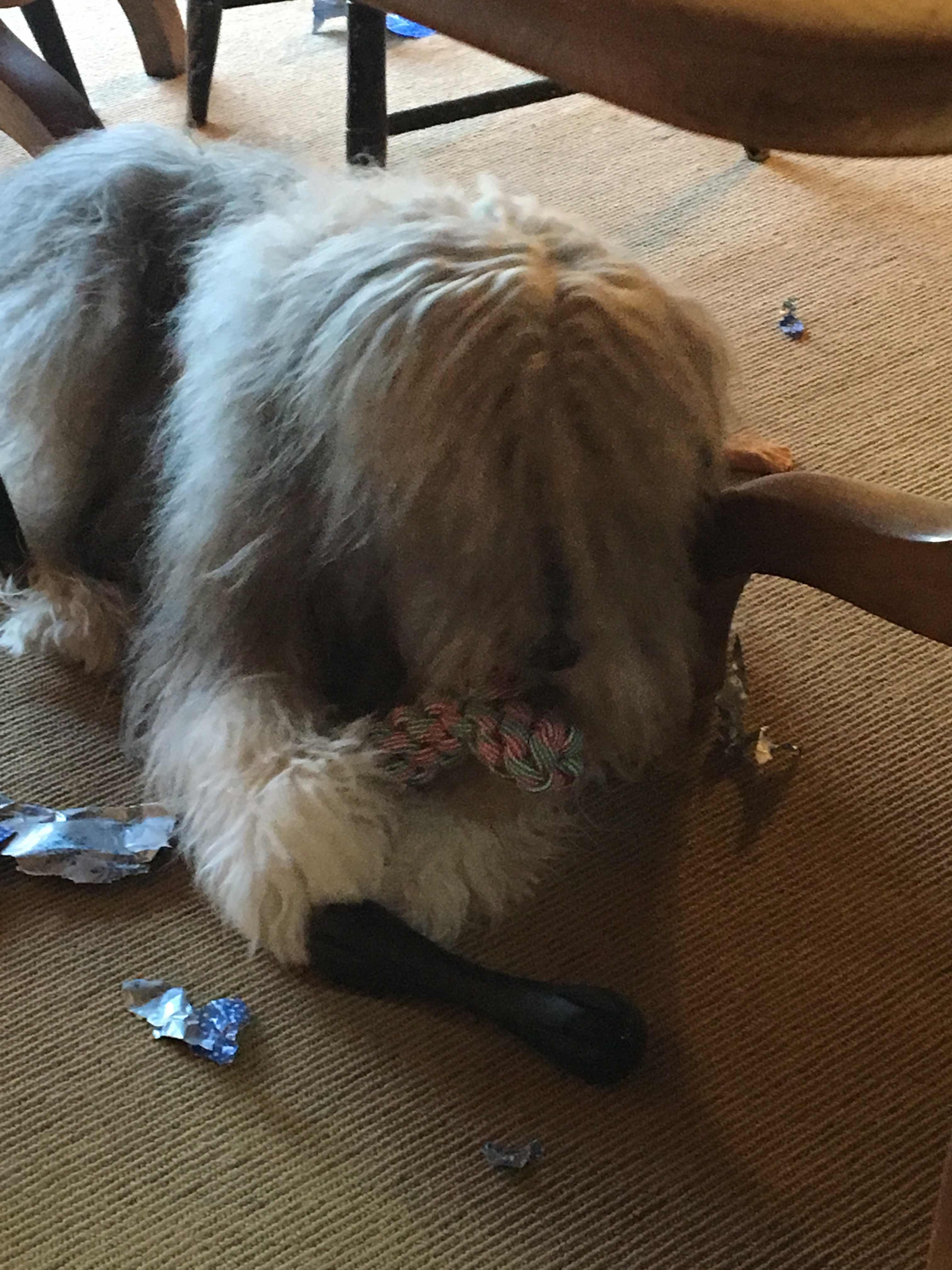 Meanwhile the FG unwrapped and was throwing around the second rope toy.  It was in the shape of a ball.  He was having a grand time until HE started to destroy that.  It was confiscated after about 4.6 minutes.
While the destroyers were at work, I was running around opening the rubber bone and the Nylabones. Frankly I initially had no interest in them.  I just wanted treats.  For some reason, Santa didn’t leave those wrapped in our possession.  I think he knew we would eat them -paper and all.
The FG also unwrapped this owl-like toy made of firehose.  It had a big squeaker.  He enjoyed punching on it and making lots of noise.  That looked like a keeper until my human noticed that the stuffing from the owl’s foot was removed. So much for the owl. 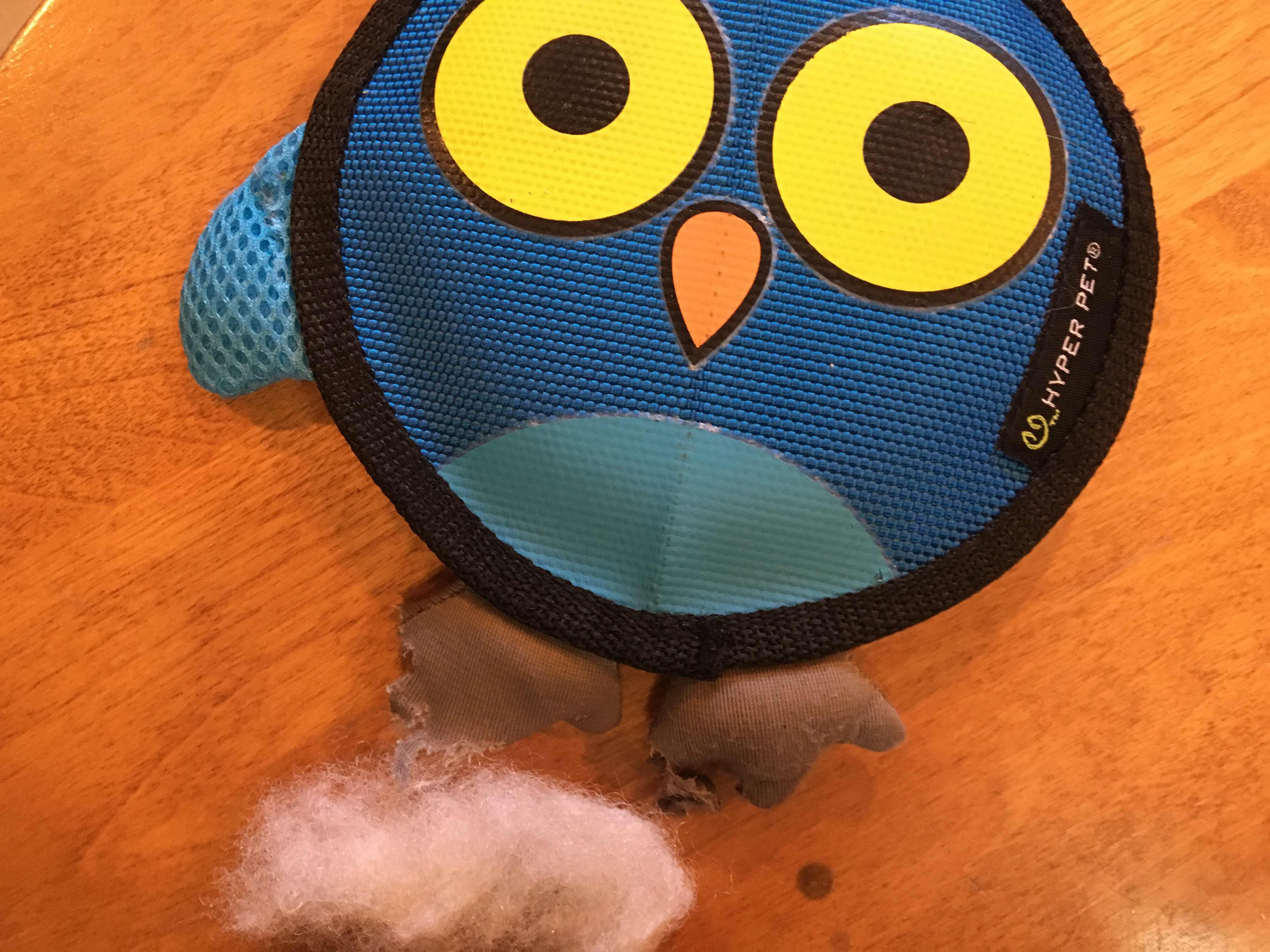 Anyway, we enjoyed opening our gifts AND the treats.  We went for a run on the golf course and had a fabulous time.  At one point, it appeared that the FG might be feeling the call of the wild- so to get him to return, my human hid and her sister went down on the ground.  He went to find my human and then went to see what was wrong with her sister.  She grabbed his leash.  That’s the new way to recall the FG.  Play dead.

So all in all a wonderful Christmas.  My human’s sister leaves today for Newfoundland.  Some people in Nova Scotia go south for the winter.  She goes to Newfoundland.  Mind you, there IS a boyfriend there.  So that explains it.
My human is off until after New Year so we’ll be hanging out at home, going for walks and playing with our one new toy – and chewing Nylabones.  All is right with the world!
Hope Santa was good to you too!!!
Have a good one!  Peace and paws up!
Seizure free days: 17