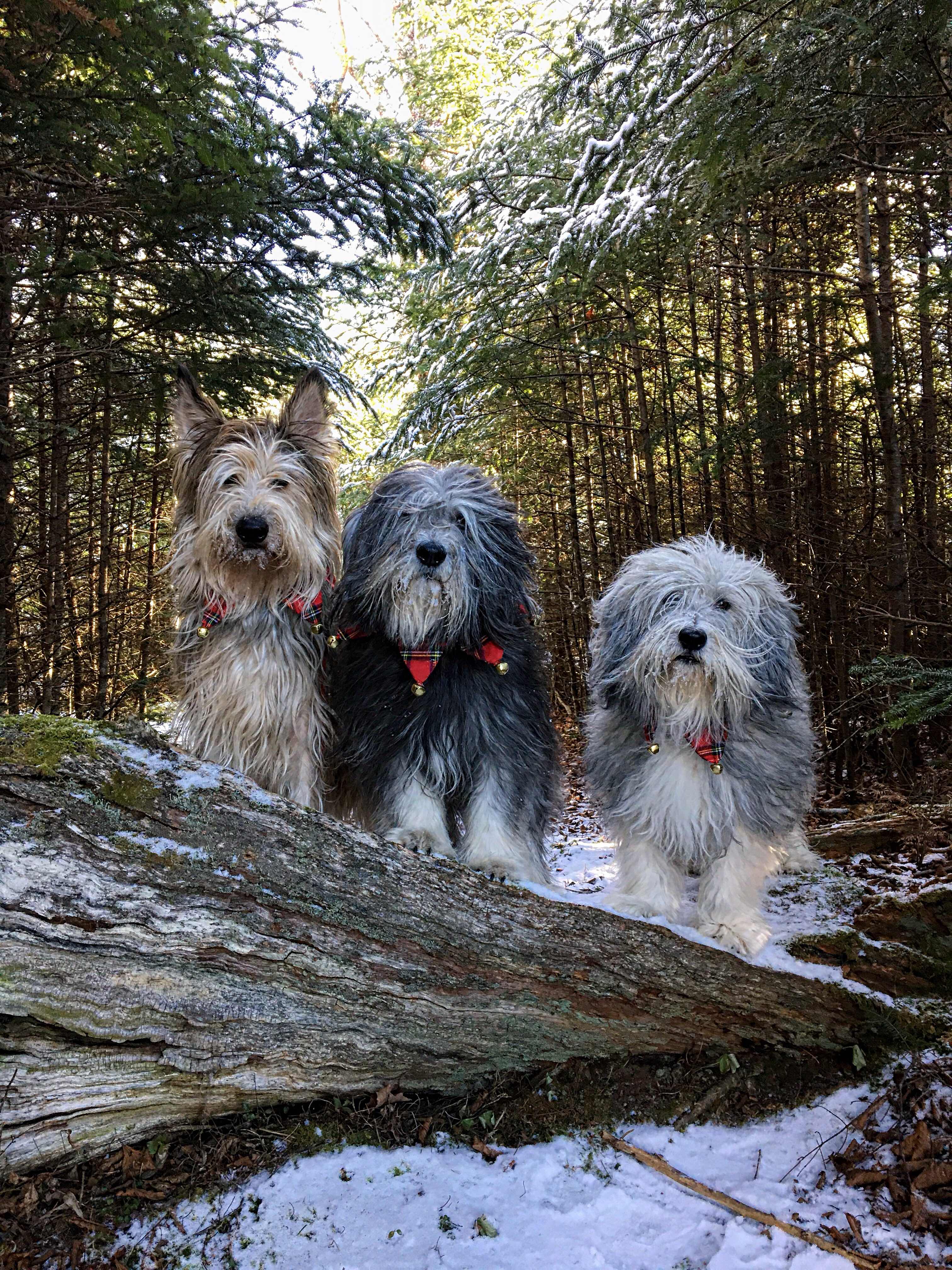 Well could you hear the shouting yesterday?  I’m sure the noise extended beyond our neighborhood. It actually wasn’t shouting.  More like loud pleading.  Although there WAS some shouting when one of us went AWOL…

Why all the kerfuffle? Because she pulled out this year’s antlers.  Which are attached to Santa hats.  Should have stuck with the old version. It was time for the photo shoot.
I was thankfully feeling much better yesterday.  A bit uncoordinated, but still full of life and ready to roll. So when we saw our human put on her coat and stuff her pockets with treats, we ALL went crazy. One slight problem.  She got ready prematurely. The battery on her phone was low, so she had to charge it before we headed out for the photo shoot. Try and explain to 3 insane dogs that they have to wait for a battery to charge.  While the human is bundled up in a winter coat with pockets full of treats.  She had to give up waiting at 75% power – she was sweating and Einstein’s incessant barking and the FG’s continual racing to the front door were enough to drive anyone insane.
Her plan was to go down to the lake.  And set us up there.  She had the FG on a long line so there would be no chance he would try to go out on the thin ice. We raced down to the lake.  My human actually got the FG to sit, which is always a challenge.  She called to me and Einstein who had stopped on the trail.  Einstein quickly came and assumed his position.  Then she called for me.  No response.  She called again.  No response.  By now she is starting to sweat as she knows the FG won’t sit much longer.  She calls me again.  Nope. She doesn’t want to move the very obedient Picard, but she has no choice.  She grumbles as she heads back up the trail to find me. She literally comes around a bend not 12 feet away, and there I am with my face in some brush either smelling or eating something. She grabs my butt and says “Come on!!!!!” And I reluctantly leave my treasured spot.  Smacking my lips.
By this point, her fingers are freezing so she doesn’t even ATTEMPT the antlers.  What follows are the good shots in various locations . And the bloopers.  She does eventually try the antlers.  It is not pretty….they tend to flo down….
Good shot: 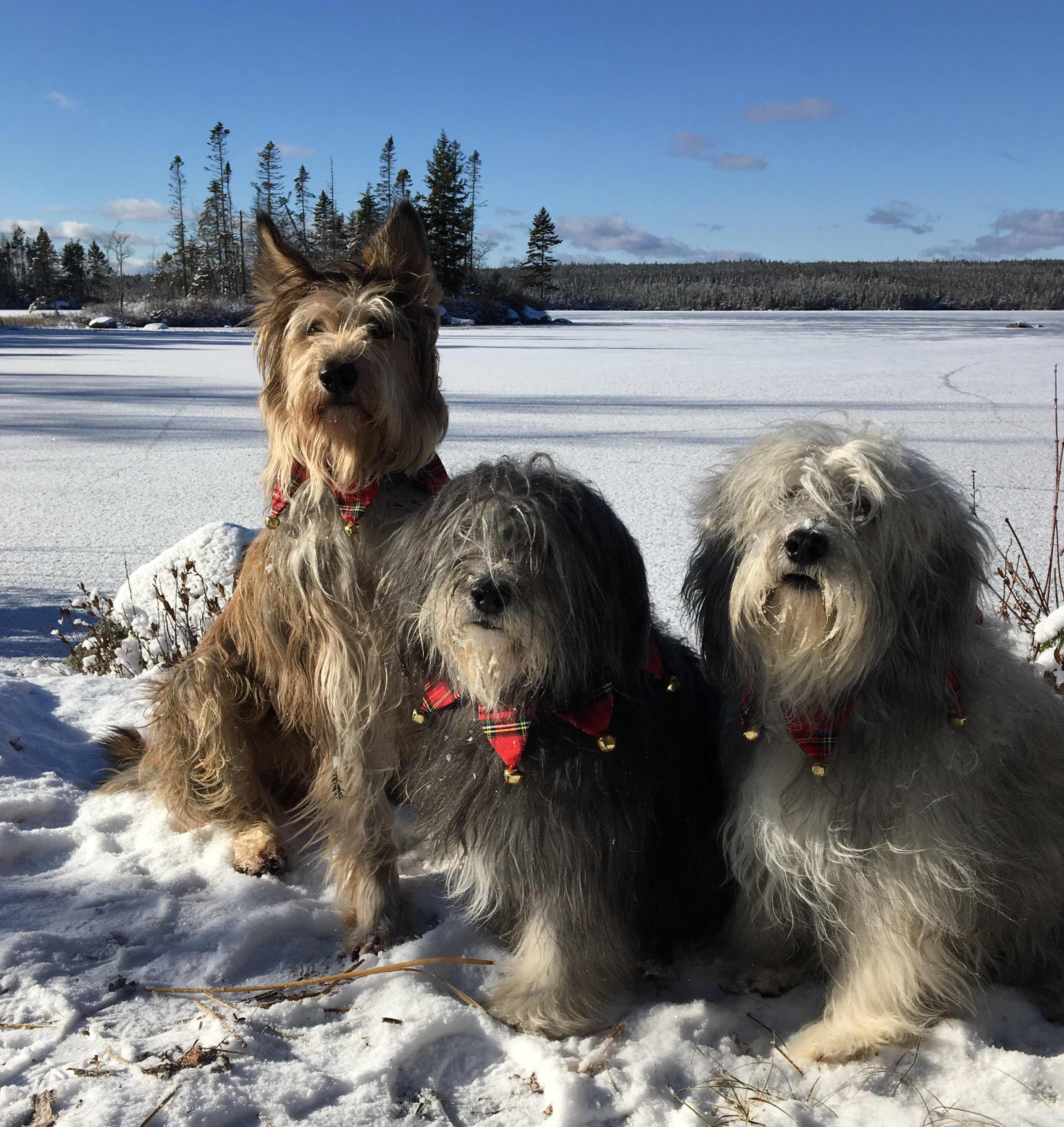 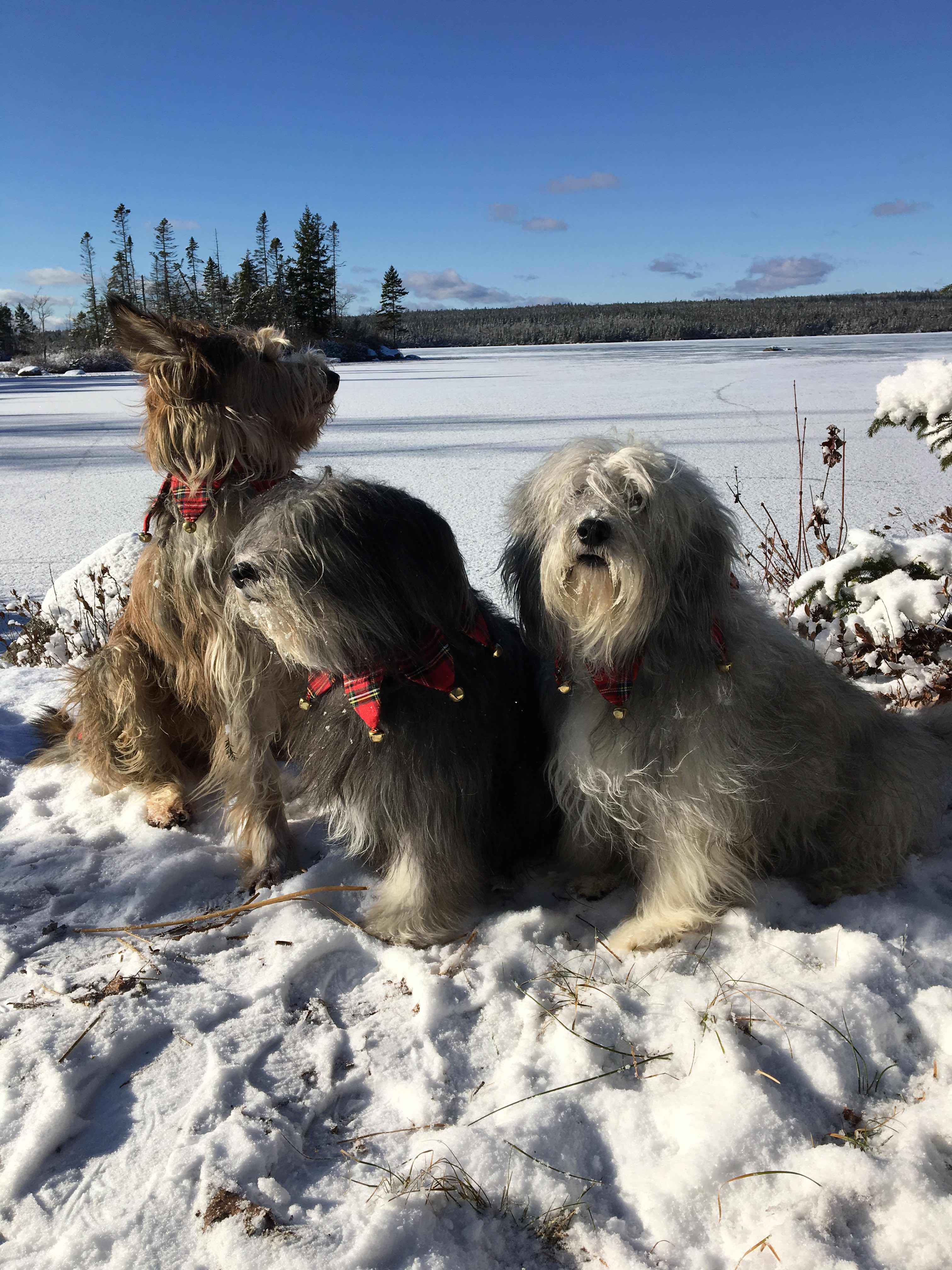 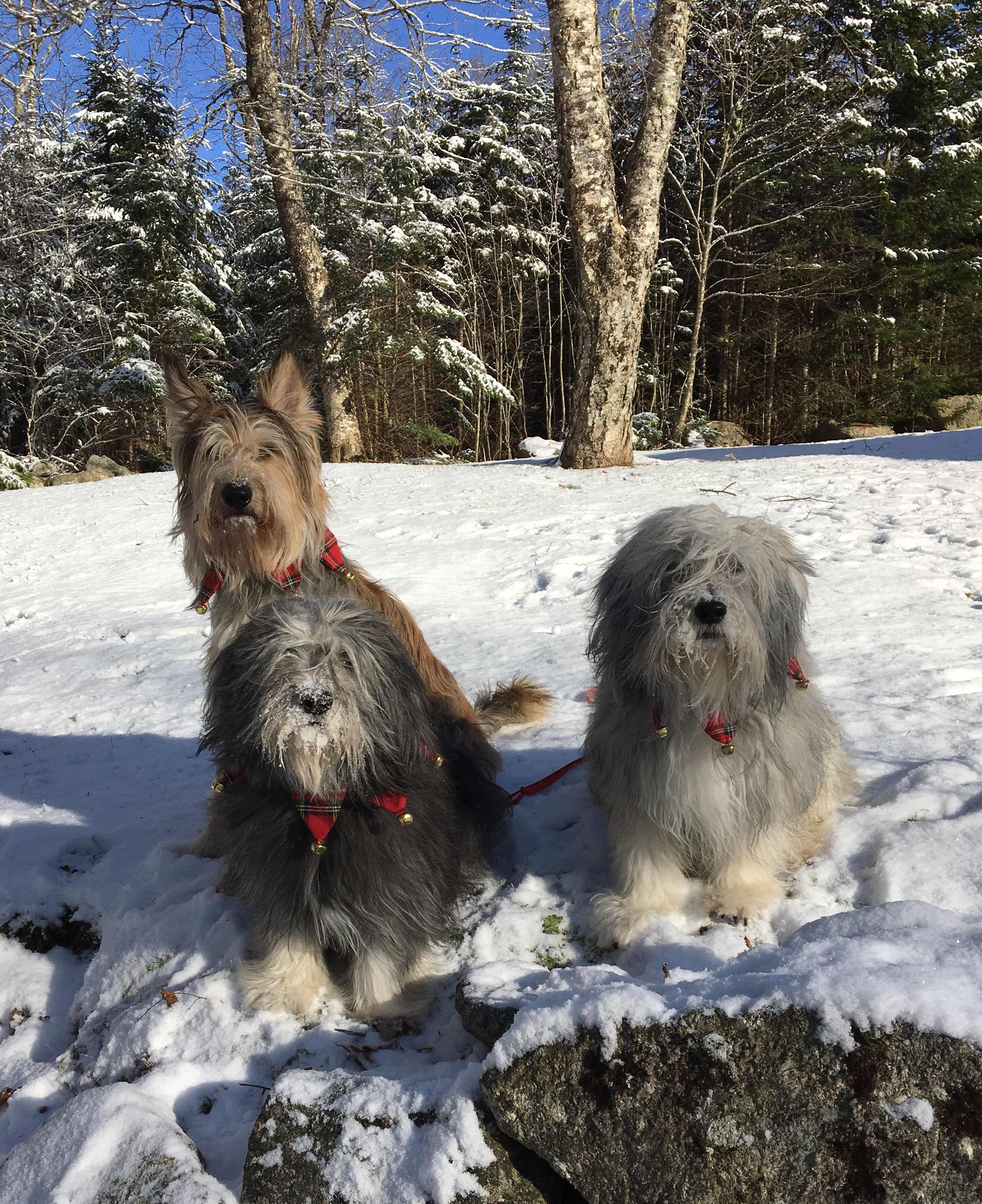 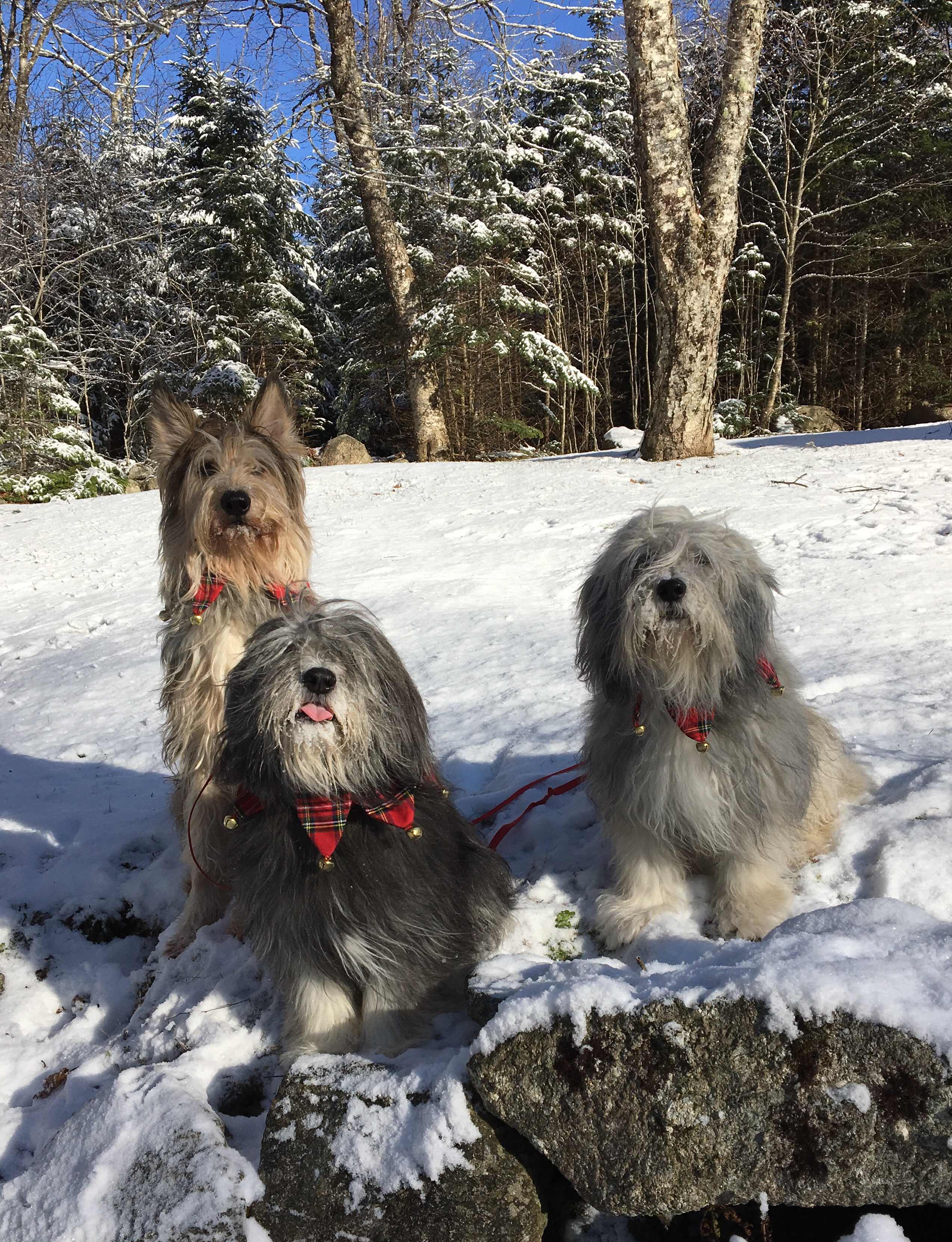 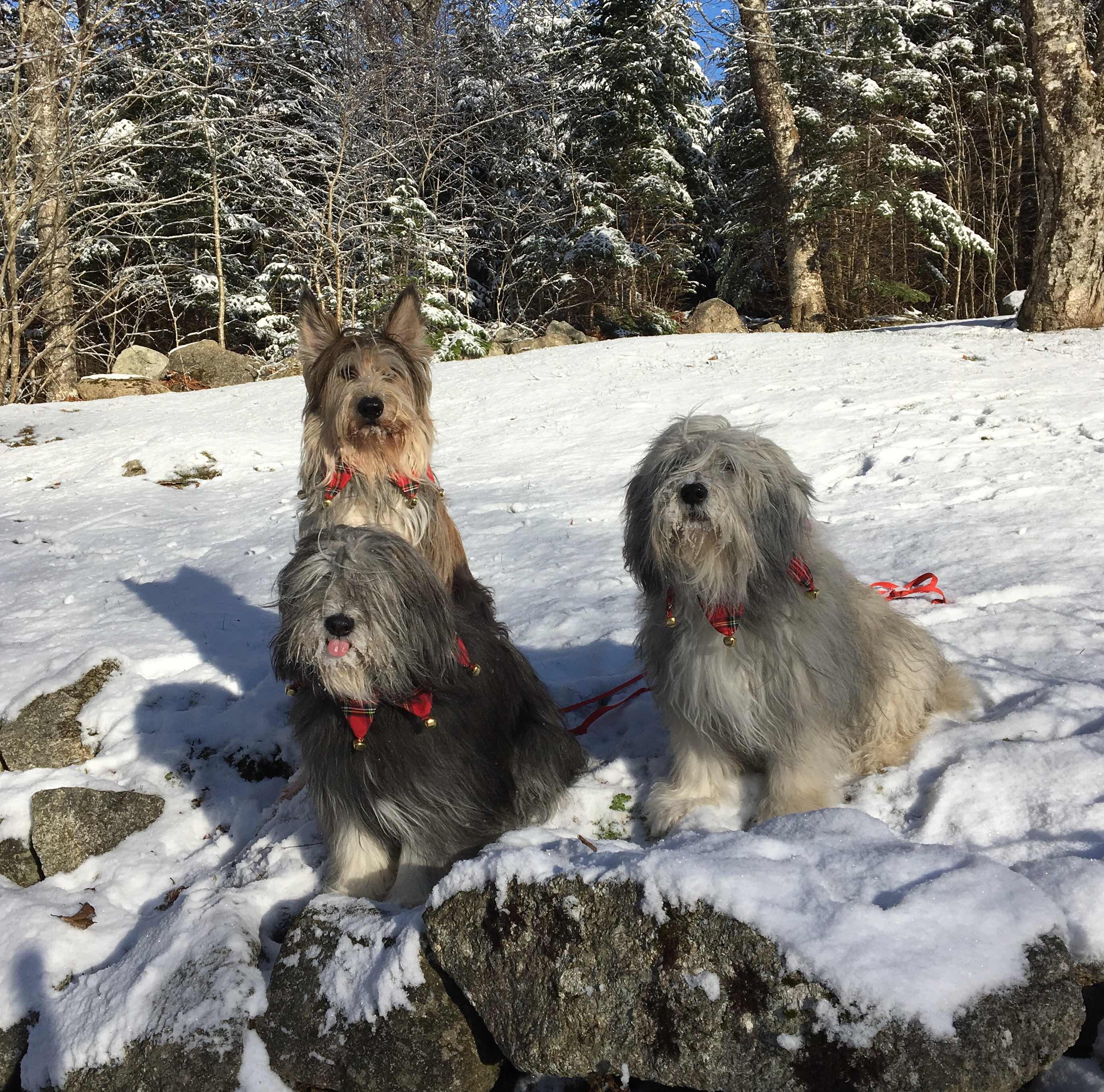 Now she attempts the antler hat.  On the good dog.  There are over two acres on our property.  Guess who has to photobomb…. 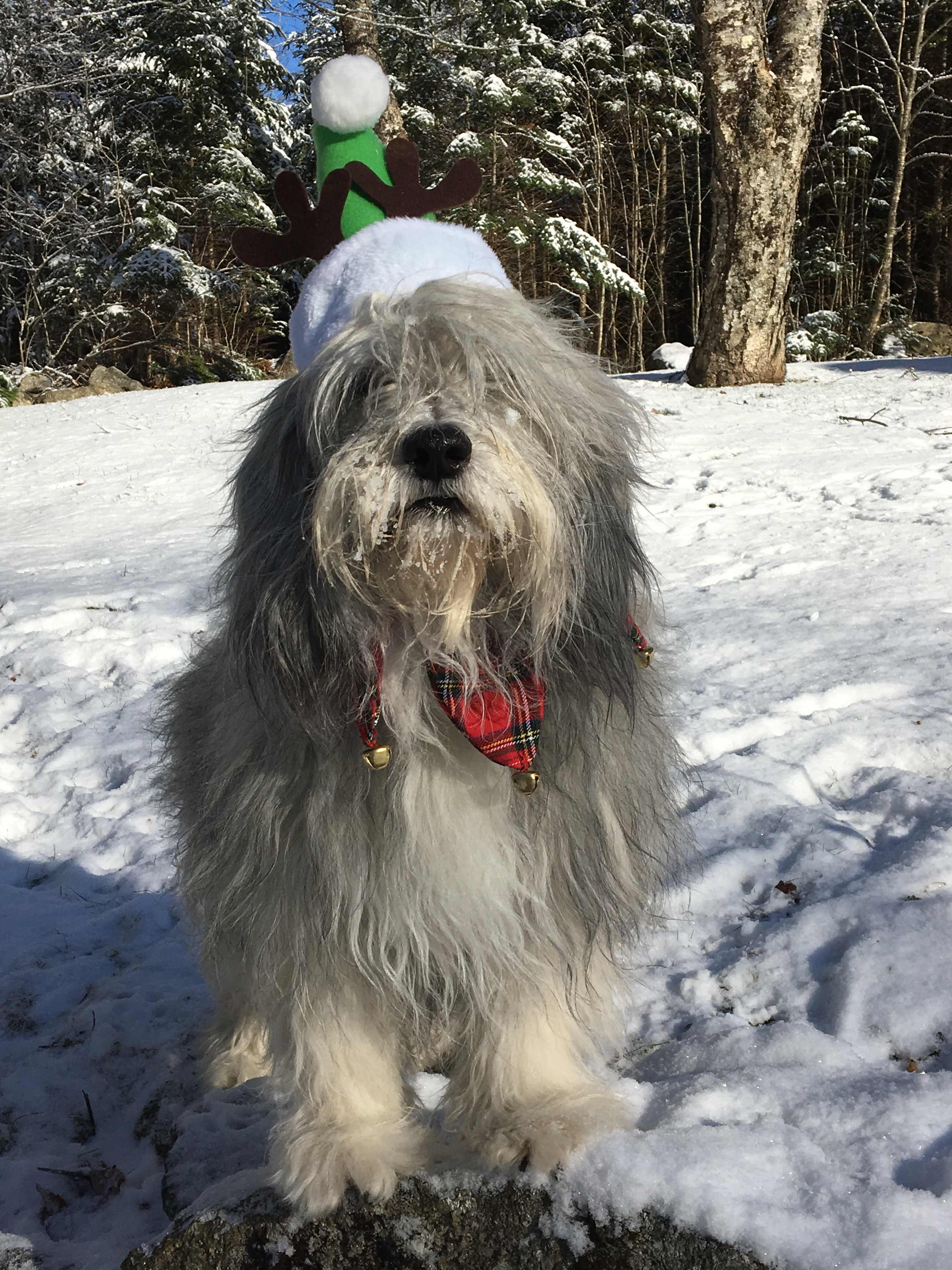 And then we ALL try the antler hats.  Bloopers first followed by the best result.  Although even the BEST doesn’t really show the antlers.  But note who sits through every shot… 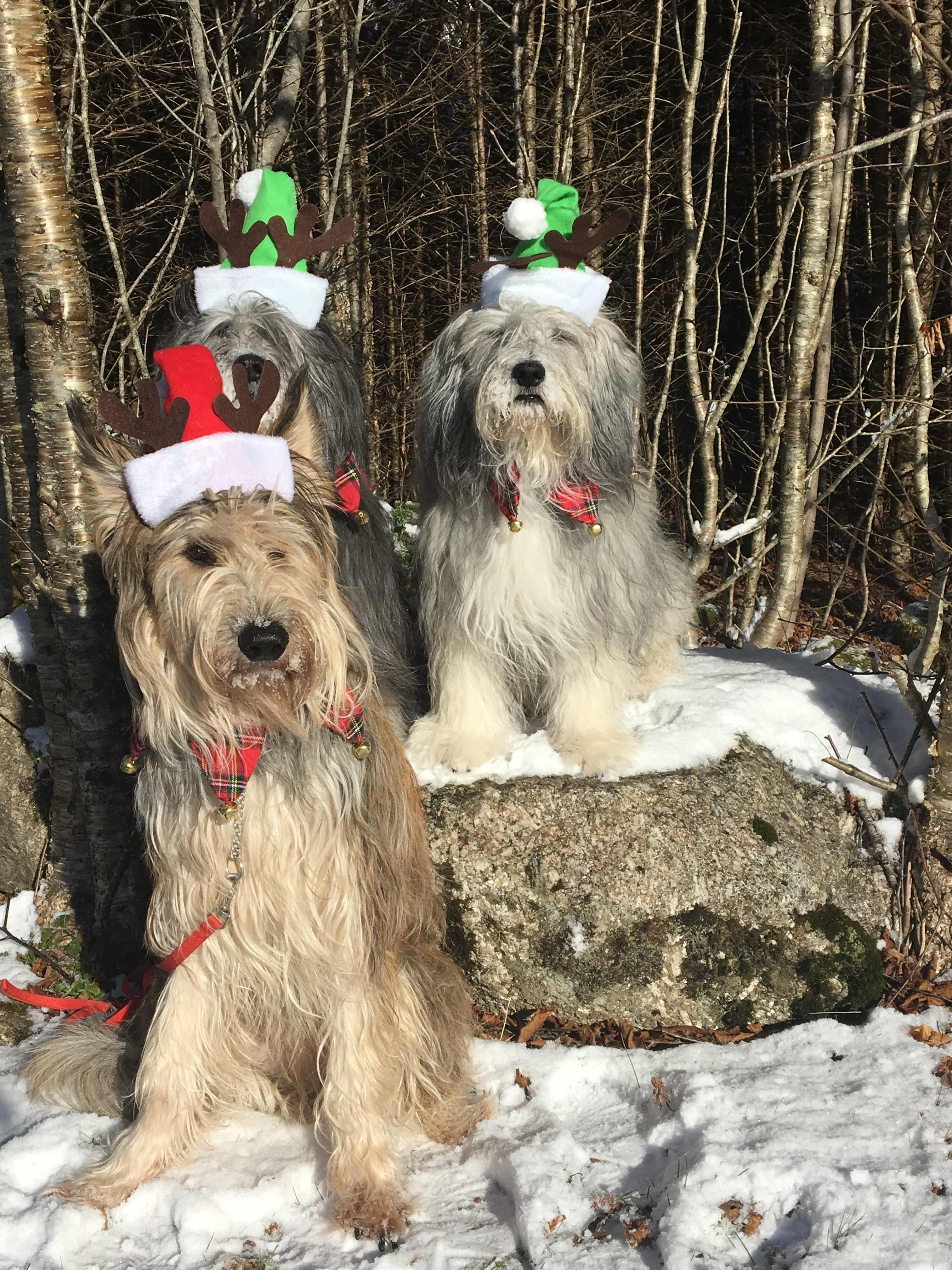 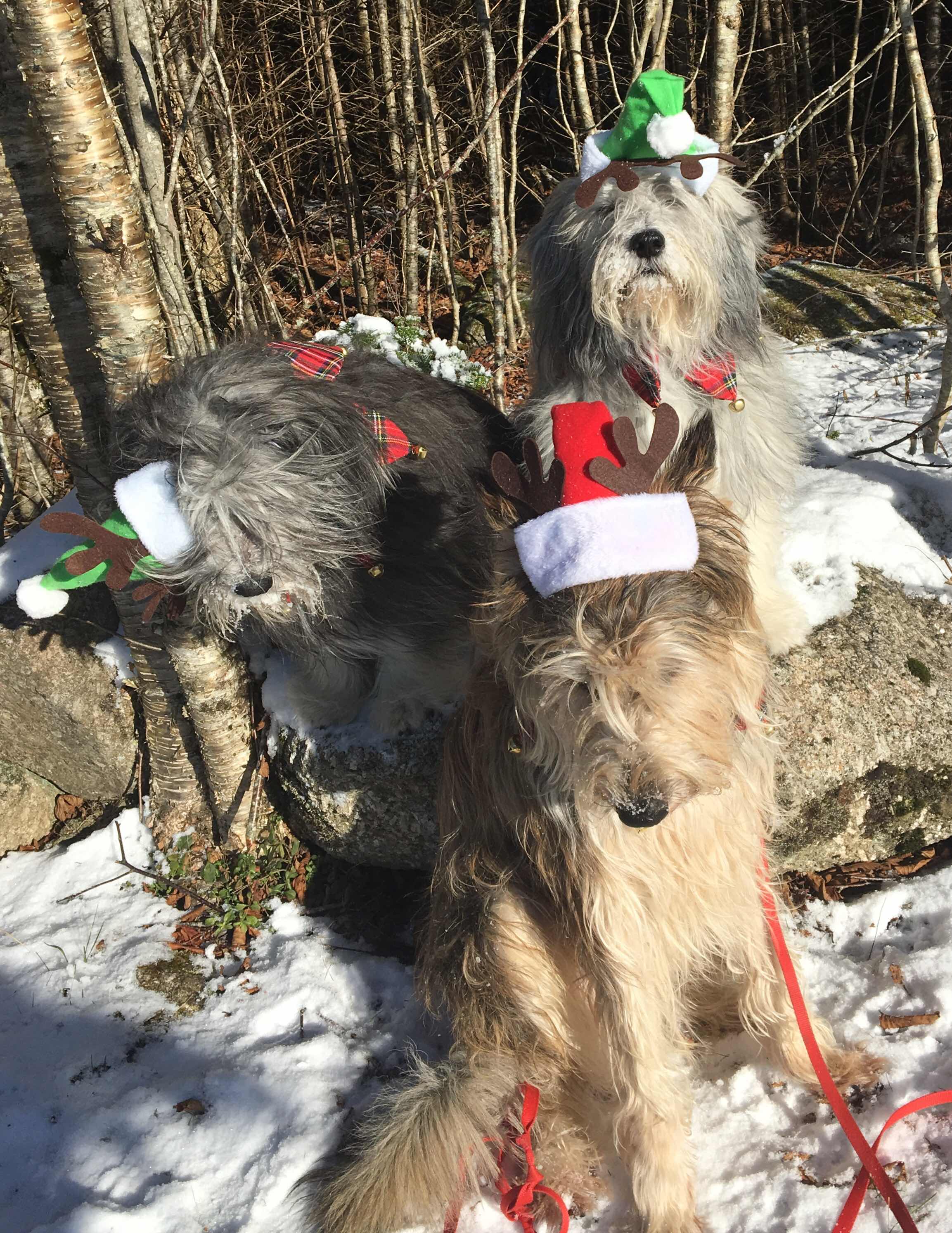 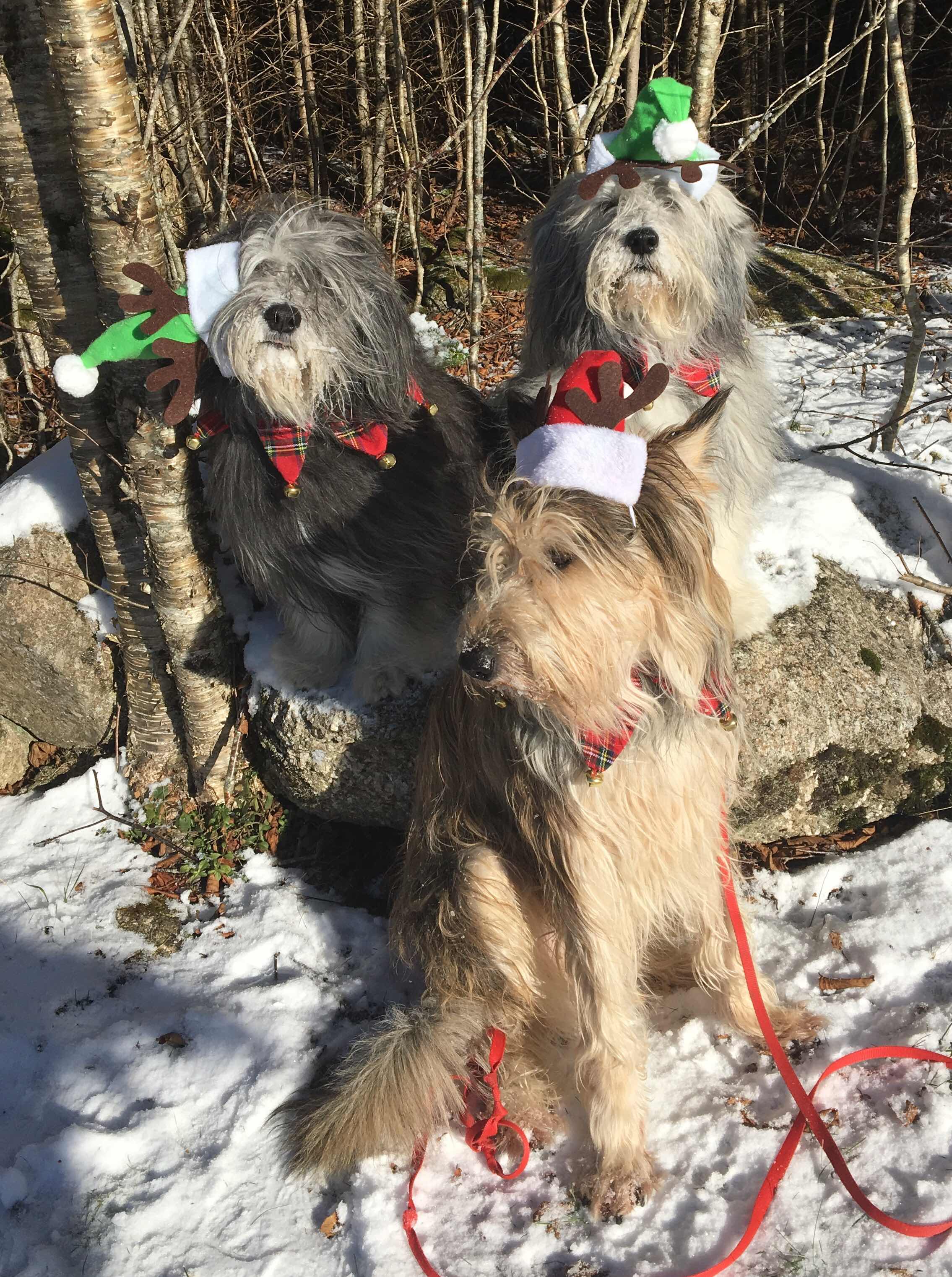 Finally all in position. And you can’t even tell they are antlers!!!! 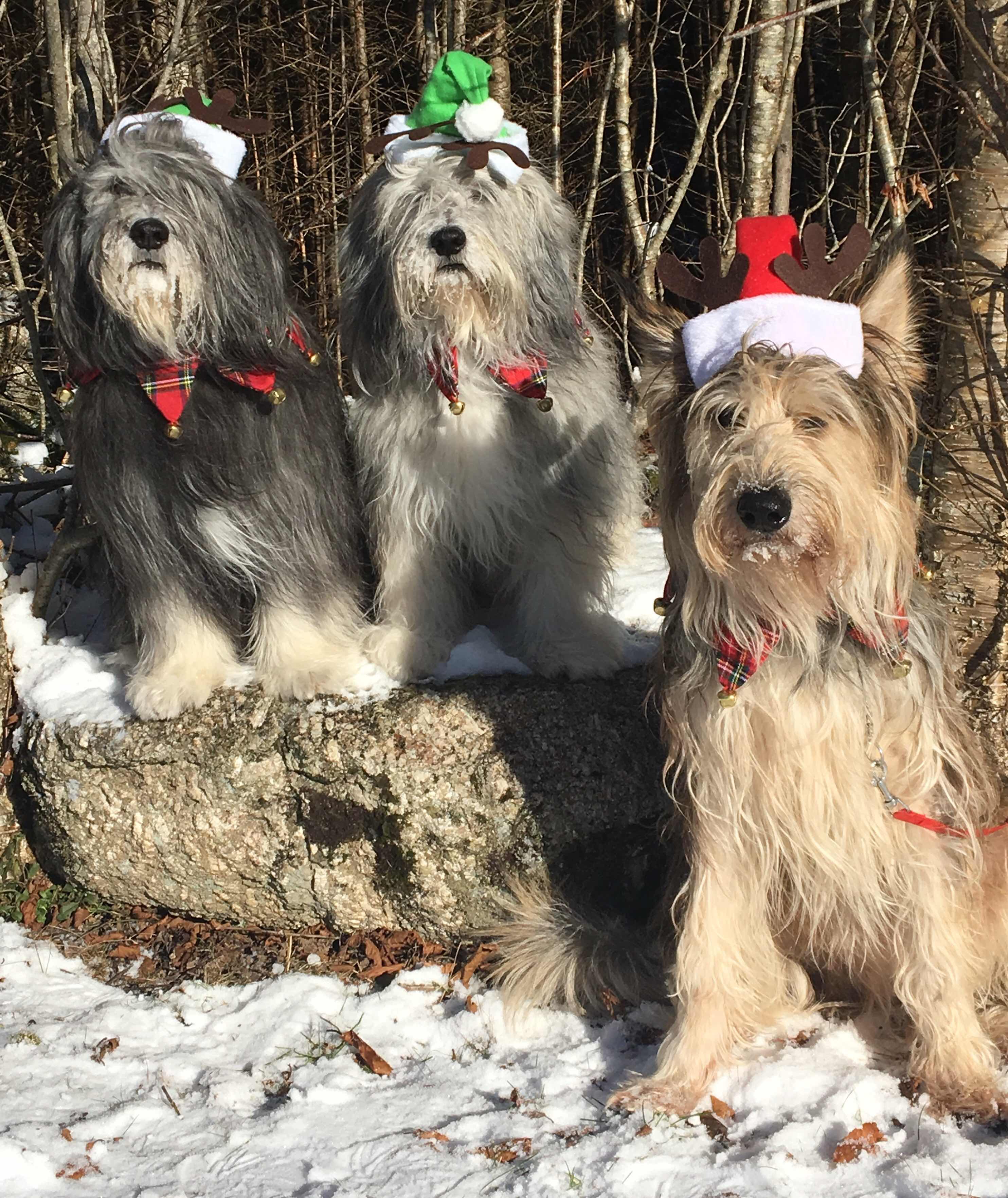 She wasn’t thrilled with any of them.  My fear?  I heard her in the garage last night.  I THINK she was looking for the old antlers.  Heaven help us.

Have a good one. Peace and paws up.
Seizure free days: 1