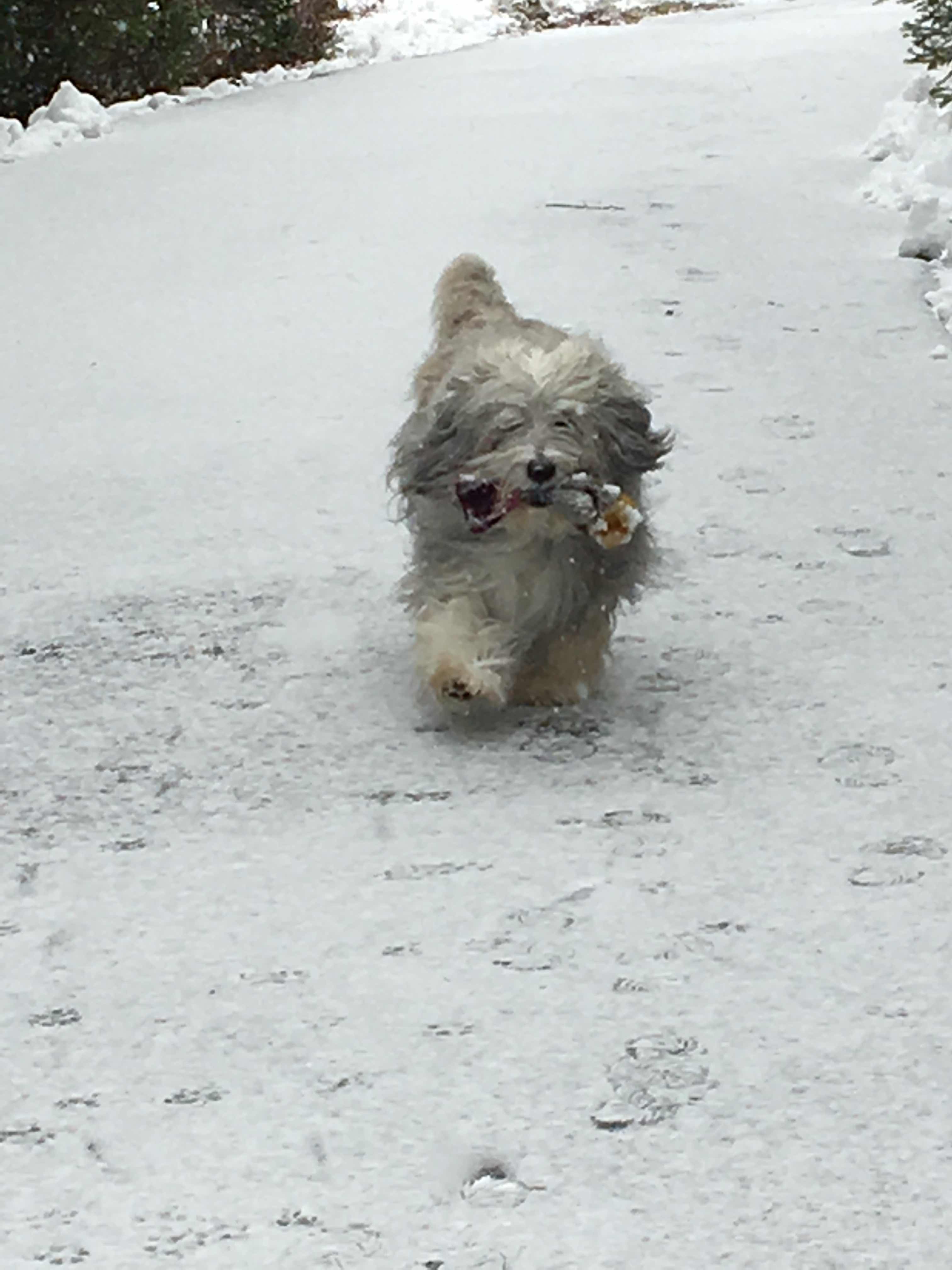 Yesterday she was off. So….drum roll please… we let her sleep in until almost 7 AM!  See – we can be thoughtful.  By the time she got dressed, it was light out- so we got to go for longer walks.  Sweet.
First the FG went. They had a lovely long walk up on the golf course.  Then it was our turn. The PON walk.  We went on the trail, sniffing and snorting and taking in the aroma of any four legged creature who had been by.  My human let Einstein off leash – because, let’s face it, he IS the most obedient.  And as we we were heading for home, my human decided to play an old game.  She drops one of her mittens on the trail without us seeing it.  We continue to walk and then she loudly announces “uh-oh I lost my mitten.  Go find it!”  And then the dog(s) go to search for the missing clothing.  Great game, right?  Except she forgot that we never PLAYED this game before.  She played it with Bernese in the past.  Not us.  At least not that we remember.  Sure we play “find the bunny, or the hedgehog” in the house but this mitten thing was not familiar.  Or if it was, we pretended we didn’t know what to do. She tried it with Einstein.  He stared at her like she was speaking Swahili.  Kind of like the look I gave her when she wanted me to retrieve the new ball. She pointed to the mitten which was clearly visible in the middle of the trail.  She told him to get it.  At first he ran in the general direction of the mitten, but then went off to the side of the trail, sniffing the brush.  He was literally 1 foot from the mitten.  She shouted “get it.”  He stepped toward it, looked at it and ran back to my human. Minus the mitten.  So she had to walk back and retrieve it herself.  She mumbled something like “if it was a bowl of food or a pile of poo you would find it quickly.”
As we came down our driveway, she decided to try it again.  THIS time, Einstein ran out, pounced on the mitten, grabbed it and ran back to my human.  Success!! He knew what to do all along.  We walked a bit further and she tried it again.  Bingo – success again. So you would THINK she would quit while she was ahead.  On the third try, Einstein was getting bored.  Even though he was getting a treat every time he brought back the now soggy mitten.  This time he did what he did the very first time. He went around it – started sniffing the trees on the side of the driveway and ALMOST looked like he was about to take off. My human shouted “get it.”  He slowly turned around, looked at her, looked at the mitten and then decided that he was pretty close to home – and breakfast- so he had better comply.  He got the mitten. And a treat.  All the while I was focused on going home – because I wanted breakfast.
The find it game can be fun.  It makes us use our noses and our brains. And if we don’t get the mitten , our human gets more exercise- which is good for her.  Trust me – we think these things through…
Have a good one. Peace and paws up.
Seizure free days: 67