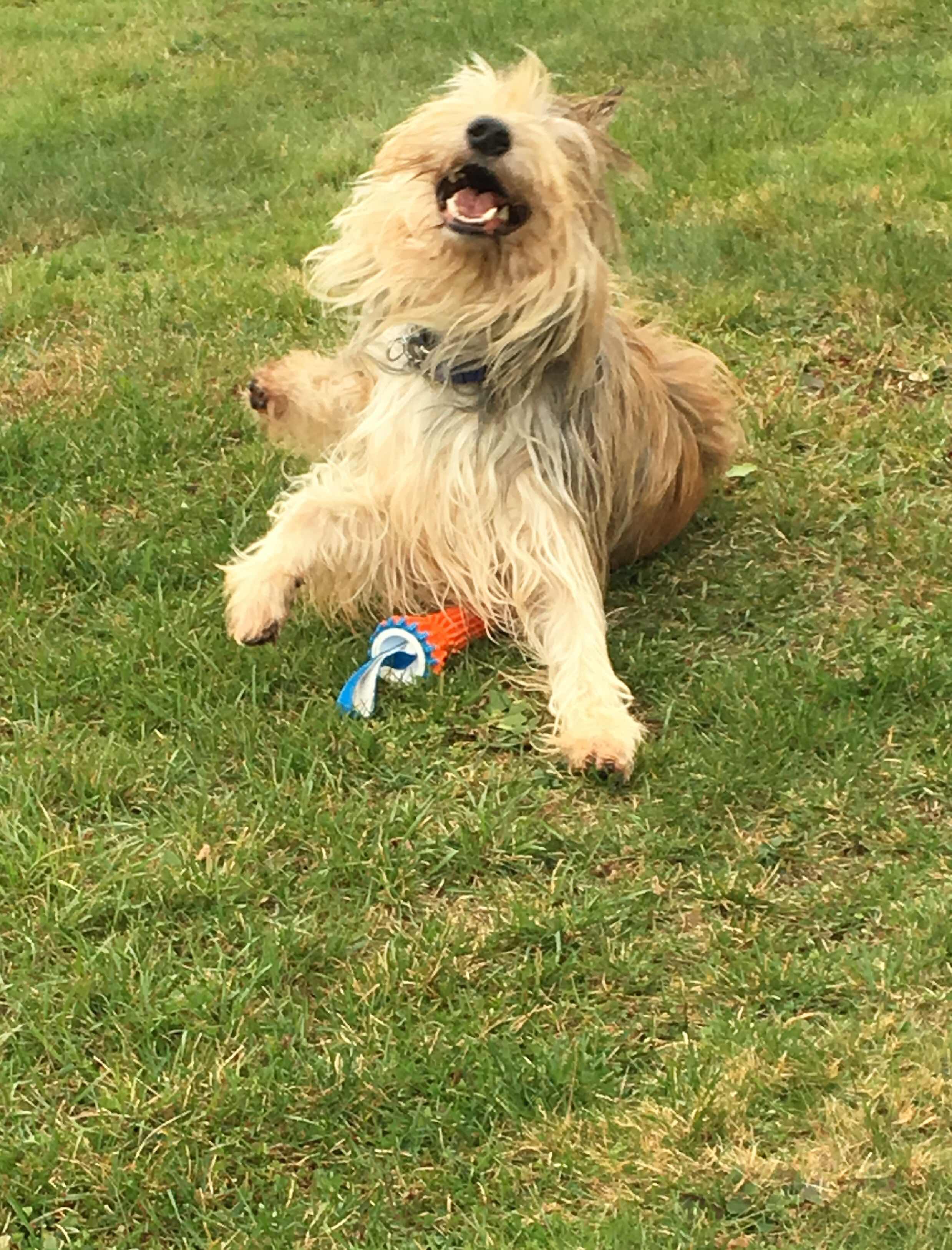 Well we thought we might have broken the law.  But we didn’t .   I don’t think…

My human has been WAITING for November 1.  That’s the date that the fenced baseball field not too far from our home, allows dogs to run free.  So she PROMISED us that we would go on Monday.  Only problem?  We had to wait for the cable/phone/internet guy to come.  My human became exasperated by our molasses speed internet- and when two people from the company suggest that you go with the competition- you do it.  So she booked the appointment- but all they can tell you is that a technician will be there sometime between 8:30-5:00.  So that pretty much restricts your entire day. We had our walks early – but we couldn’t go to the ball field for fear the technician would come.
Einstein KNOWS, like a psychic, that someone is coming.  He must pick up on my human’s vigilance.  So every chance he gets- particularly if she is in the bathroom, he barks.  Even better if she is in the shower. And his alarms are generally false – he’s basically testing her response time.
Anyway, the guy finally showed up at 1:00.  We were sequestered on the deck where we barked like crazy and threw ourselves against the deck door.  The guy took a look at the required work and went to his truck to get the equipment.  He returned a few minutes later and reported he was missing a modem.  Which is pretty critical if you are changing the internet.  So he told my human he would have to go and get one.  Which would take over an hour.  My human said it was fine – as long as he called when on his way back.  That way, she could squeeze in our promised leash-free adventure. He left and my human rushed to put her coat on, stuff her pockets with treats, grab some fetch toys and load us into the vehicle.  And that’s when the adventure begins.  And her blood pressure goes up.
She puts the FG in a crate and Einstein and I ride behind him in the vehicle.  At least we are supposed to.  But before my human even got into the driver’s seat, I was happily seated in the passenger seat. She got out, went around the car, opened the passenger door and moved me back to the back.  I should add that while this is going on, the FG is SCREAMING like he is being tortured.  His screaming continued and my attempts to weasel my way back to the front seat continued as we drove to the ball field.
We pulled into the parking lot of the field, all excited and then saw it.  “It” being a GIANT St Bernard running loose in the field.  With his human pushing a baby carriage. How do you spell potential recipe for disaster.  There was no way my human would let us loose in a field with a GIANT dog we didn’t know.  So we waited in the car – now with all three of us participating in a screaming choir.  So we waited.  And waited.  5 minutes.  10 minutes. 15 minutes.  At which point the woman pushing the carriage went to a side gate and went to get a stick for Cujo to retrieve .  That’s went my human said “Let’s go for a drive.”  She headed for another ball field and drove about 15 minutes.  She still wasn’t at the destination.  And she started thinking that by the time we got there, we would need to turn around and go back home to meet the technician. By this point the screaming had burned down to a low grumble.  So we turned around. As she came back to the original destination, she saw the field was now empty. She pulled in and prayed that nobody else would show up.  She unloaded me and Einstein and put us in the field to smell all the traces of Cujo and any other dogs who had been there.  She unloaded the FG who ran with wild abandon.  Even though he didn’t know why.
She pulled out the fetch toys and yours truly and the FG nearly exploded.  The only problem with the FG – he can’t WAIT to get the toy.  But he never brings it all the way back.  He collapses and rolls on it. I, on the other hand , ALWAYS come back.  I knew she had treats in her pocket.  Meanwhile, Einstein wanders and just watches the proceedings.  He’ll fetch but he takes his time.  He’s in no rush.
So the throwing and walking to the rolling Picard continued for about a half hour.  At which point, my human figured we had had enough. Plus she wanted to get home for the technician.
After she loaded us in the vehicle, she glanced at the gate. The sign had always read No Dogs – from May 1 – November 1. But she was shocked to see that the sign no longer had the dates.  Just NO DOGS allowed. We could have been arrested !  Yikes!!!! She furtively looked around, jumped in the car and sped home.
We were all silent- knowing how close we had come to incarceration. OK.  Maybe they wouldn’t throw us in jail – but who wants a ticket?!
As soon as we got home, she searched the municipality’s website to see if we were fugitives.  She DID find a page that said that field WAS open to dogs in the winter.  She didn’t seriously study if that was the most current update to that page.  Ignorance is bliss. Mind you – not really in the case of the law…
So that was our big adventure yesterday.  I HOPE we can still go there.  I mean it was obvious that Cujo thought he could be free – and he wasn’t exactly inconspicuous.  But there have been some recent By-Law changes- which were not all that positive for dog owners.  My human is wondering if this slipped into the legislation.  We’ll have to find out…
Have a good one. Peace and paws up .
Seizure free days: 53