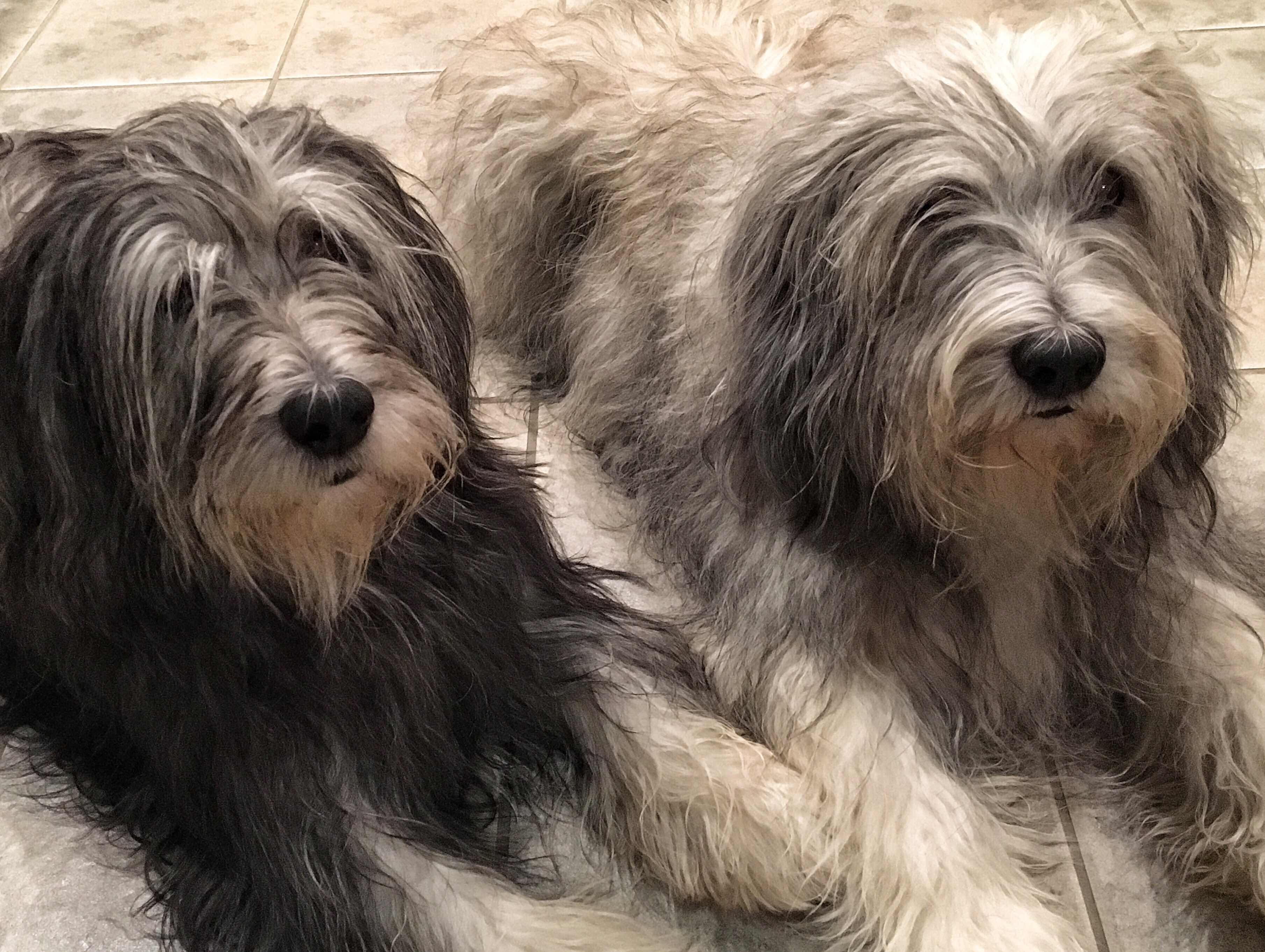 So after getting my human up at 4:00AM, and after our breakfast and her “nap” – she abandoned us for several hours yesterday and went to a Christmas craft and antique fair.  She claims she “helped” her friend who had a booth and was selling antiques- but we also found out she did some “shopping.”

First off she found the booth of a woman who sold mostly dog related antiques and collectibles. For my human, that’s akin to putting a kid in a toy store.  So although she didn’t “need” any more things for her collection aka dog museum, she did find a few things she couldn’t pass up.  They weren’t edible so we didn’t care.
Then she found a booth that sold dog collars and the woman who makes them is from Newfoundland.  Her collars are VERY cool – and of course, my human came home with one .  Check it out -it resembles the famous painted houses in St John’s, Newfoundland. 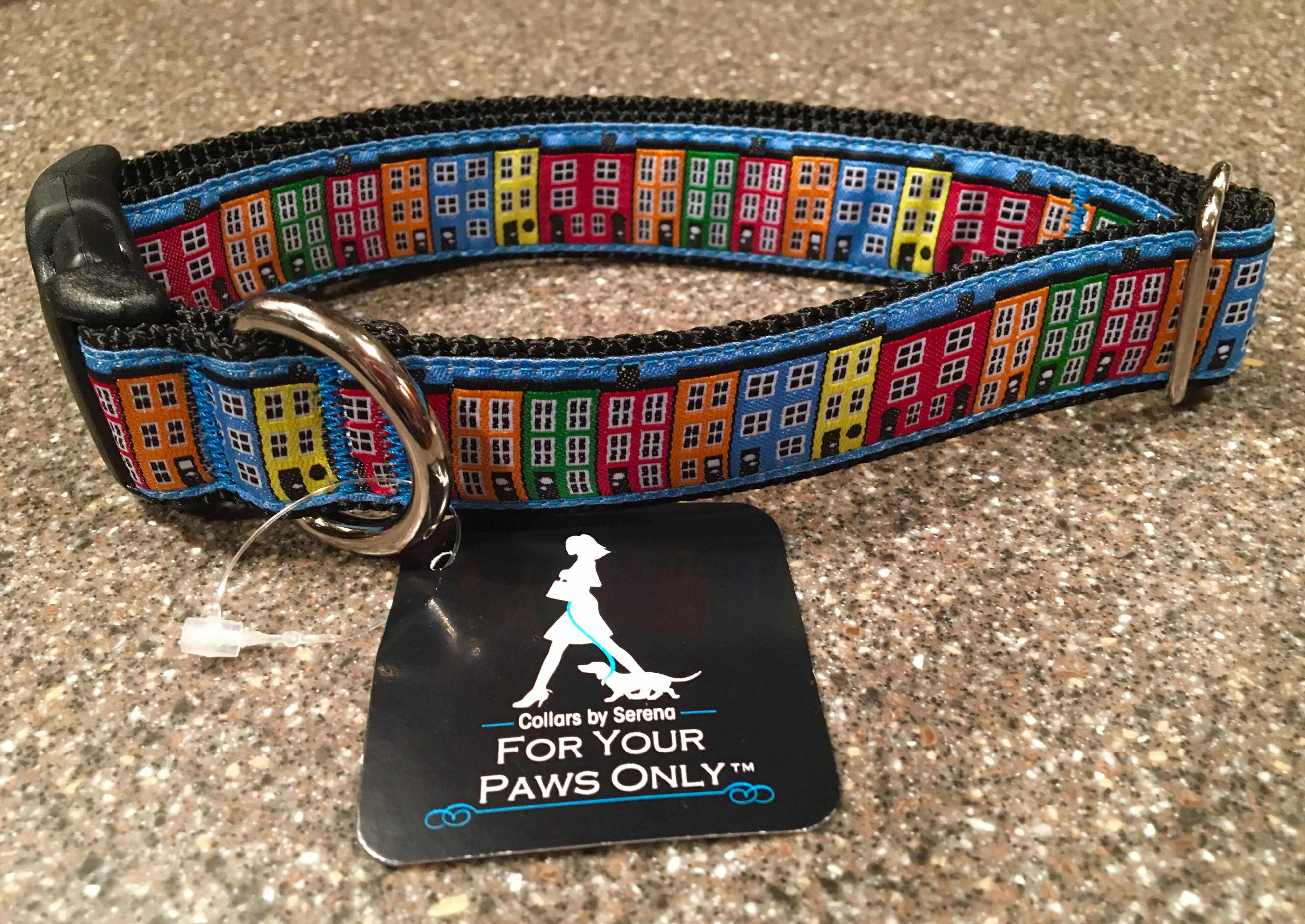 They had LOTS of cool patterns and styles.  It was hard to pick the one.  We’ll all be fighting over it.  So you KNOW she’ll be ordering two more on-line. You can find her here:

http://www.foryourpawsonly.ca/
Anyway, in typical chatty fashion, my human started talking to the very pleasant, passionate owner of the business.  And OBVIOUSLY she owns dogs.  She has a 10.5 year old Great Dane.  Yes- you read that correctly-10.5.  And going strong.  Must be that pure, fresh Newfoundland air.
And the woman also has three Galgos.  Don’t know what they are? Well my human, the Queen of Rare Breeds didn’t know either.  But she learned a LOT.  Galgos are an ancient Spanish sighthound.  While they look kind of like a greyhound (and in fact the name is synonymous with Spanish greyhound), they ARE quite different.  They come in two coats – short and long hair and a variety of colors.  They are recognized by the FCI and the UKC.  The big difference from greyhounds – Galgos are built not just for speed, but for endurance.  They are used in Spain for rabbit hunting. And they excel at the sport.  The only problem- after hunting season is over, thousands – yes thousands are put to death,  some in  horrid ways.  The plight of this ancient breed has been recognized and there are rescue groups around Europe and even in North America.  So this woman has three rescued girls. She couldn’t say enough about this fascinating breed- although she acknowledged that they are not for everyone.  Because they are often raised in horrible conditions, they require a LOT of rehab.  Still – she advocates that they can be loving, wonderful pets.  I found the following link to a story done by National Geographic about the breed.  I warn you that some of the content is disturbing- when you see just how cruel some humans can be.
https://news.nationalgeographic.com/2016/10/spanish-galgo-hunting-dog-killing-welfare/
But rescue groups like this one here in Canada, work hard to give these dogs a loving home.
https://www.carlotagalgosrescuecanada.com/
So although WE didn’t get to go to the show, we learned a lot of cool dog stuff – so we’ll forgive my human this time.  I think it was her payback for getting her up at 4AM.
She CLAIMS she has a surprise for us today.  We’ll see.  Maybe it’s a Galgo!!! And we could chase bunnies together!!  We’ll see…
Have a good one. Peace and paws up!
Seizure free days: 52