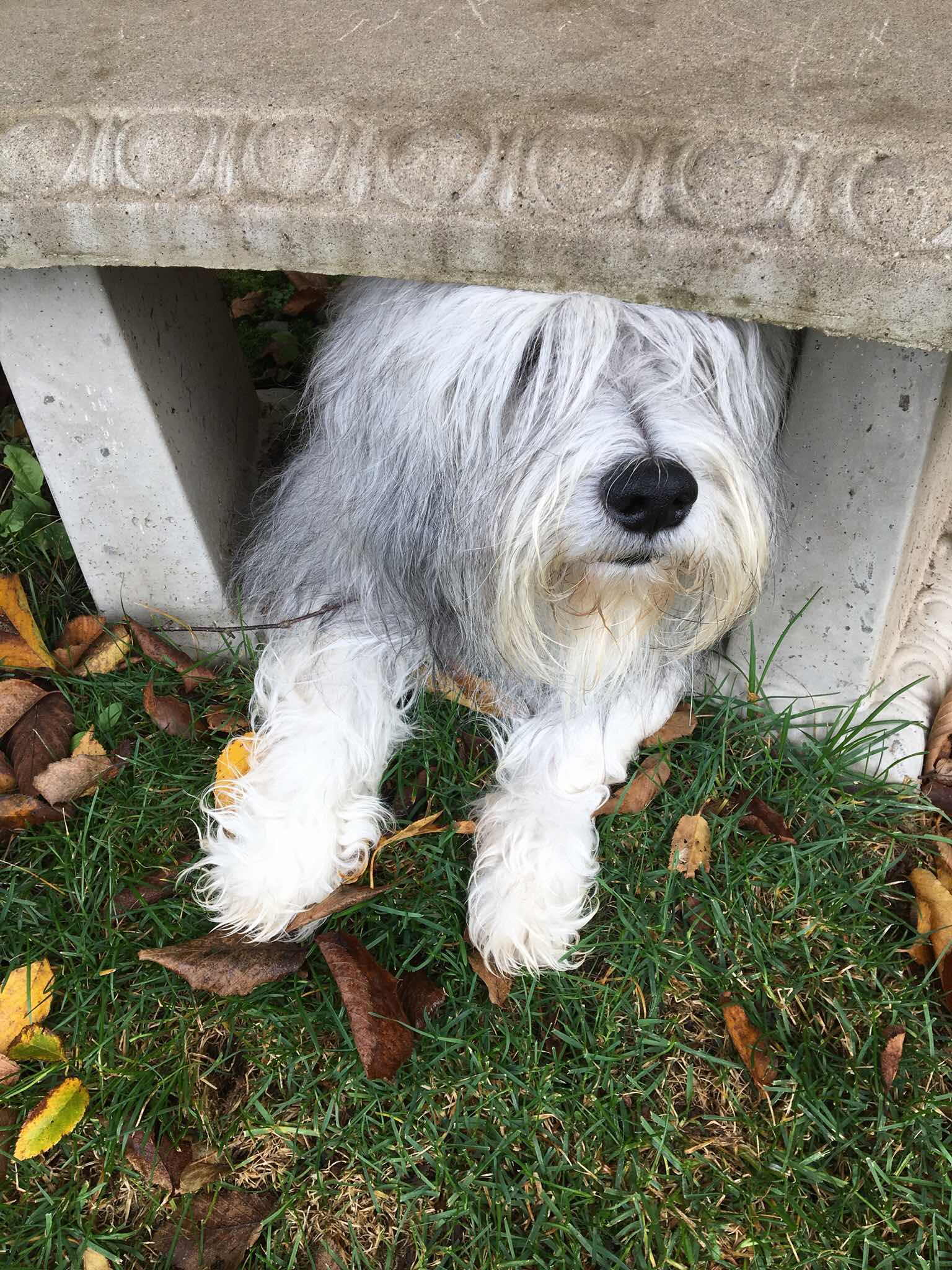 We dogs have some interesting behaviors…some of which can be explained and others….well some of us take them to the extreme.

For example, my human was surfing the net and saw this article about why we dogs curl up in a ball before we go to sleep.  They say that it’s a behavior that goes back to our wild roots – when canines in the wild would create a “nest-like” spot to stay warm in the cold and also, so they say, to protect our vital organs from possible predators.  Interesting.  Makes sense to me.  All of us do tend to roll up in a ball at times, but it’s Einstein who REALLY gets into the nesting behavior.  And sometimes it drives my human WILD.  He will scratch at the tile floor – as IF he can make a hole in it.  It’s one of the rare times when I question his brilliance.  And we are not talking few futile scratches – we are talking a continual DIGGING until my human shouts “ENOUGH FRODO!”   And his latest behavior is even more fun – he goes into the FG’s pony sized crate – which I should point out might as well have the door taken off – because it is never even used as a crate any more.  Anyway, Einstein goes in and he begins his dig-athon IN the crate.  Einstein and the FG take turns sleeping in the crate.  I occasionally go in – but I prefer the comfort of my human’s bed.  When Einstein goes in the crate, he starts digging like he is trying to create an escape route.  He digs until he is almost out of breath.  And he usually starts it JUST as my human turns out the lights and is beginning to doze off.  Is it any wonder the woman is sleep deprived?

If she shouts at him to stop, he does.   But it annoys him that he hasn’t completed his nesting project.  So then what he will do is begin licking.  I think he does it out of spite.  And then, to show solidarity, I will join in – monkey see, monkey do.  Actually, it’s usually dark so it’s more like monkey hear, monkey do.   The other night, we got the FG to join in too.  When my human threatened that we were all about to be evicted from the bedroom, we all stopped.  We do know just how far we can push the licking button.

My human also saw an article about the 5 best breeds of dogs that get along with cats.  They listed them as Japanese Chins, Goldens, Labs,  Papillons and Beagles.  I have NO idea who did this research.  Ever see a Beagle chase a rabbit?  I actually think the bottom line is that almost ANY breed of dog COULD be good with cats – if they are introduced to them early.  Now there certainly ARE breeds who would be much more likely to chase cats – but I do think it boils down to exposure.  I think we should get a kitten.  Let’s see what happens.  We would be good.  I promise….

Could you imagine that…..you have to admit, it would make for some really good blogs….if my human was still living with us….

Have a good one.