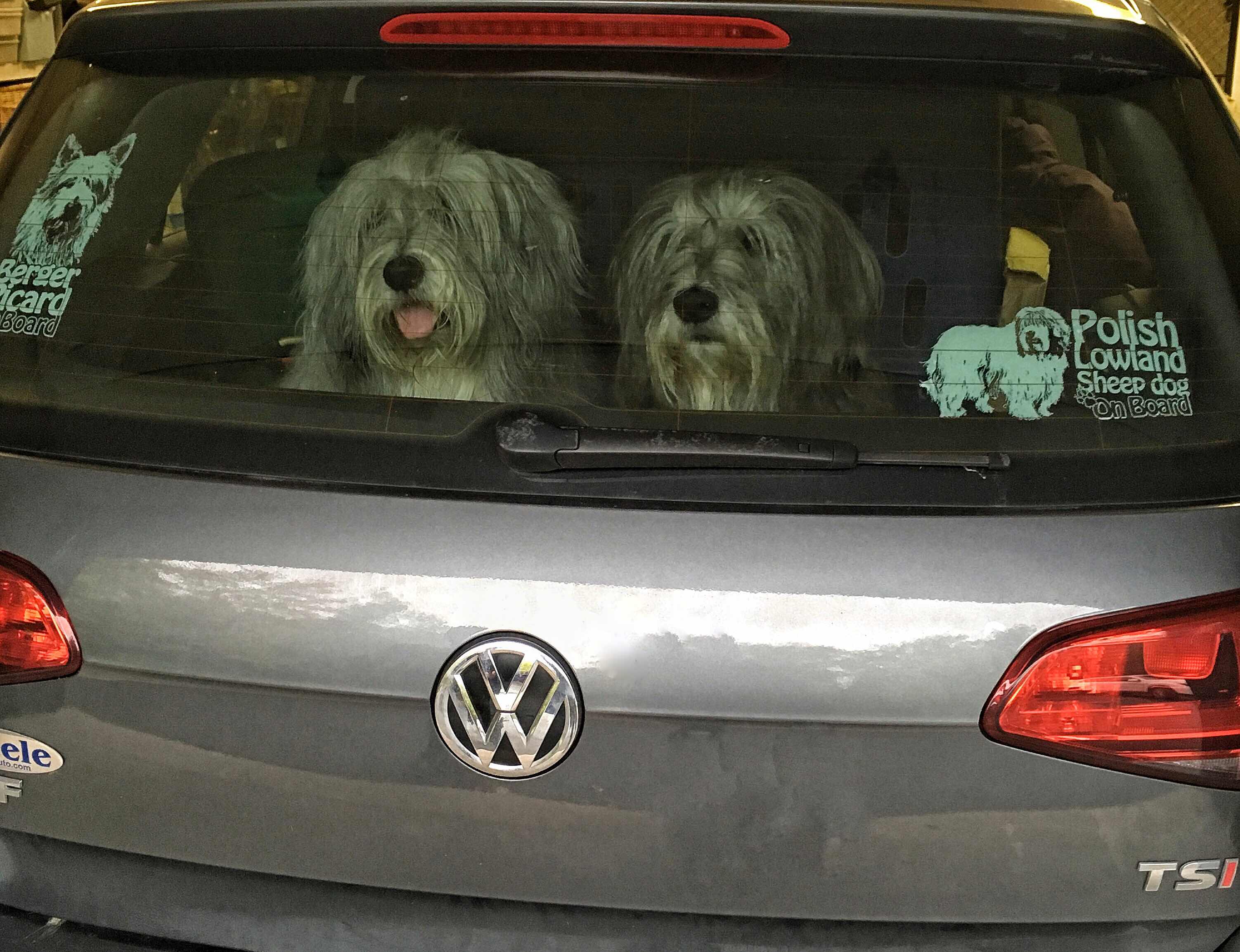 Well my human hasn’t been excommunicated. And we got to witness a miracle.  Actually more than one…

Yesterday morning my human could not decide who to take to the church for the Blessing of the Animals.   I actually needed the blessing most – because I have been limping again. Too much raucous play with Einstein.  And for that reason, she wasn’t sure about taking me for fear I would get too excited and hurt myself more.
She called her best friend, Joanie who happened to be in town.  She asked Joanie who to take.  Joanie instantly responded and said “all three” – she offered to come and help. My human warned her that it would be chaos – but Joanie already knew that.  She’s been around us plenty of times.  She has extra insurance for bodily harm when she comes to visit.
My human spent the better part of the day strategizing how this would play out.  The FG would ride in a crate and we PONs would be sequestered in the back. She arranged the crate in Ludwig and additionally placed some barricades so we PONs couldn’t escape through the side door when she would let the FG out. She selected her arsenal- a variety of collars and leashes. She decided Joanie would handle the FG, and she would handle us two PONs. The plan was made…
As predicted, when we pulled into the parking lot, Einstein took one look at the other dogs who had arrived and threw himself against the back window, growling like an extra-crazed version of Cujo.  The FG started howling right on cue .
The priest had already come out and was making his way to the outdoor grotto – with his extremely well-behaved German Shepherd.  My human shouted “ We’re here for the exorcism!” He had a laugh.  A nervous laugh, but a laugh.
First my human got the FG out- and put him on a short leash. (Note: BIG mistake).  My human accidentally let go of the leash and he walked away. He stopped to smell something so she quickly grabbed him.  She then passed him off to Joanie.
Then it was our turn. She had to open the hatch without us jumping out and running to see the other dogs who had arrived.  She somehow got Einstein out first and put him on a leash.  He was all puffed up, ready to “introduce” himself to any dogs there. BUT not to worry.  My human had cooked up hotdogs and had pockets full – so he was actually rather obedient while I got out and got leashed up.
Everybody out. Now to make our way toward the grotto.  And that was when the first miracle, began to occur.  The FG who had actually been sitting fairly well beside Joanie, while my human was grappling with us PONs- suddenly decided to bolt- and she lost his leash.  And this time – he ran. Heading for the road. Joanie took off after him.  Racing faster than my human has ever seen her run.  My human somehow tossed me and Einstein back into the vehicle.  I don’t remember much – I just know I was suddenly back in the car- it happened so fast. She closed us in and ran to join Joanie in the chase.  Luckily the service had not yet begun – but all the other participants and the priest watched in dismay. Nothing like making a grand entrance.  My human raced up a hill and around the corner by the church- to find Joanie who had just captured the runaway.  Miracle number one. She looked a bit pale- and was holding on for dear life.  The FG just shrugged.
My human marched him back to the vehicle and got a different leash. Joanie held him in a death grip- and he went with her to lie down close to the grotto where the service was about to begin. My human got us out of Ludwig and we joined the group. We didn’t care about the other participants.  We had hotdogs being stufffed in our faces every 20 seconds so we were happy.
During the service, we were actually well behaved.  By the Grace of God.  Literally.  We had the holy water sprinkled on us and didn’t attempt to attack the priest. Miracle number two.
When it was over, the priest who is from Poland asked what we were.  He had never seen a PON before.  Go figure.
We were loaded into the vehicle and both Joanie and my human just looked at each other. And breathed a sigh of relief.  Did I mention she is a REALLY good friend…
After we got home, the last miracle was about to occur – although my human didn’t find out about it until after the fact.  When Joanie was leaving our place, she realized her glasses were missing.  She tried to think where she last had them and recalled they had been on her head when she arrived at the church.  She figured she might have lost them during the chase. So, unbeknownst to my human, she went back to the church and searched around.  Sure enough – they were on the ground right at the spot where she had tackled the FG. Miracle number three.
So three dogs blessed and three miracles.  All in one day.
On this Thanksgiving Day, thank goodness for all our blessings – a roof over our heads, food in our bowls, toys to play with and a bed to sleep in.  And among those blessings we cannot forget family and particularly friends –  who always come to our aid when we need them the most…They put up with our shenanigans and are always there to help.  And as  we have seen, they are often the greatest blessing of all…
Have a good one. Peace and paws up.
Seizure free days: 24