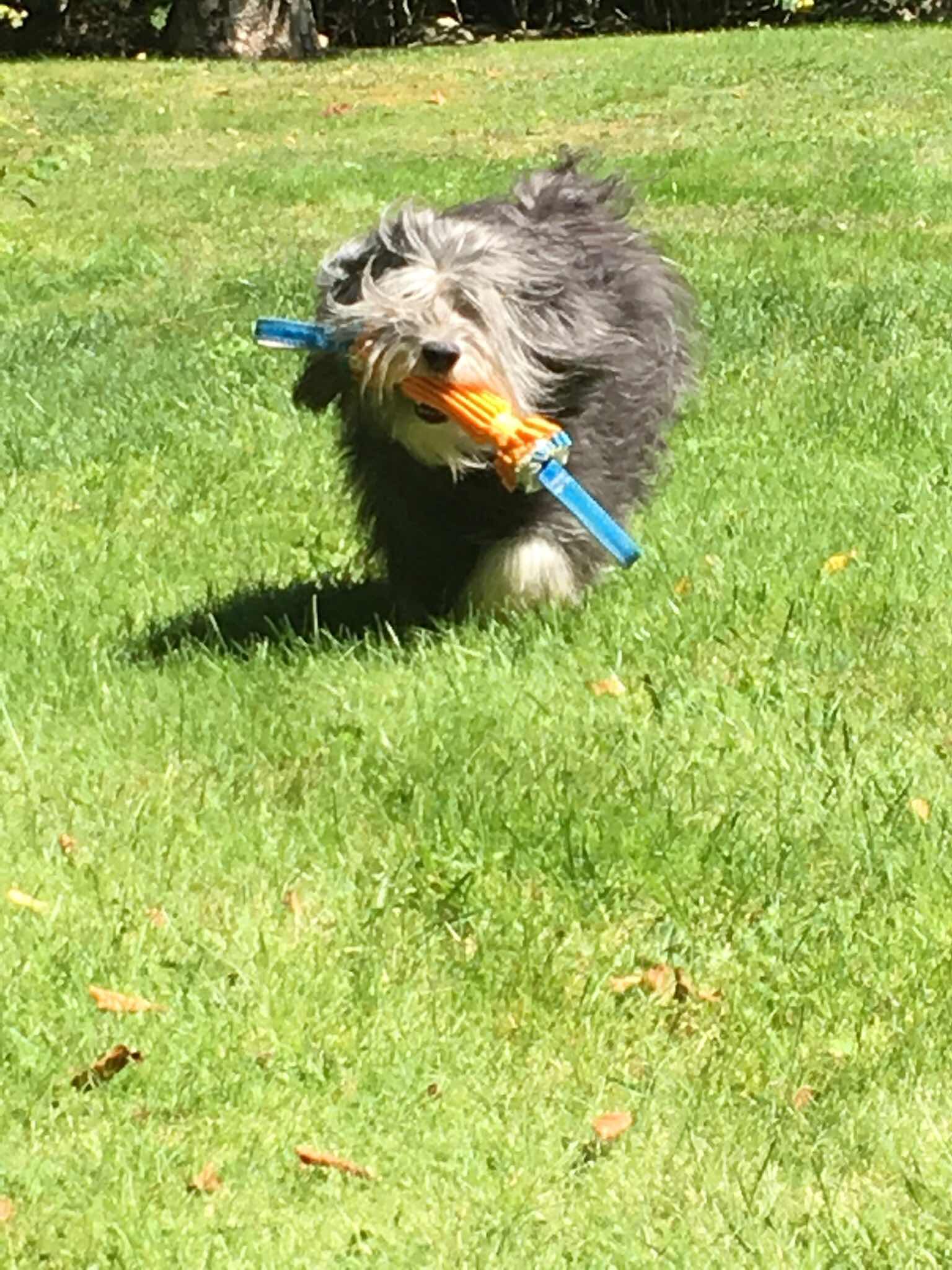 Well the on-line dating project has had dismal results.   No really good local options.  My human thinks she could get a job helping people to write profiles about themselves – although I’m not so sure she should be thinking she is so good at it – her writing obviously hasn’t resulted in any REALLY good potential partners for her.  But when people have names like “Biggest loser,” “Trying AGAIN” and “Trainwreck,” you have to wonder.  Why would someone call themselves that?!  One guy listed one of his sumer hobbies as “winnie roasting.”  I THINK he meant “weenie” roasting.”  Either that or Mr. Pooh better hide.

We suggested she more wisely put the money into more dog treats.  Or vet bills….

The other day we were having a fetch-a-thon in the backyard.   First the FG did his thing and then Einstein and I went out. As we know, I go crazy.  All common sense and ability to process and reason goes out the window when I play fetch.   My human throws one direction and I go first (because I HAVE to) and then while I take off, Einstein is thrown another fetch toy in the opposite direction.  He’s pretty smart.  He knows we alternate directions each time – so while I am running to get my toy which has been thrown, he starts running in the direction that he KNOWS his WILL be thrown.

Anyway, at one point my human tossed the toy and retrieving it meant either jumping up a three foot wall by an embankment or running around the wall.  Einstein went up the wall.  No problem. And then he jumped down the from the wall.  Then it was my turn.  And I followed his lead.  No problem.  We alternated and this time, Einstein chose to go around the wall.  And he jumped down.  And then it was my turn to go that way.  I was in a frenzy moment – and wasn’t watching where I was going – I was so intent on getting the toy quickly.  Bam.  I made it half way up the wall.  And I tried again – and was successful.  And then I jumped down.  My next turn was on the flat part of the lawn while Einstein did the wall thing.  When I returned from my easy retrieve – my human took one look at me and I was limping with a sore front leg.  It likely was the result of my missed wall turn.  Of course I still wanted to play fetch.  My human traded for a treat and said “Oh no buddy, we have to stop.”  I looked at her forlornly and hobbled unwillingly into the house.

I was put on restricted walking the rest of the day and the same the next morning – when I seemed to be much better.   But when my human got home from work, I managed to bolt out before she could grab me to put my leash on.  I did my typical “attack Einstein routine” – spinning and barking and jumping like I haven’t just spent the entire day with him.  Needless to say, I was hobbling by the end of my joy run.

Yesterday I was NOT allowed to horse around at ALL.  NO OFF LEASH ACTIVITY.   I was much better – but my human wasn’t taking any chances.   She thinks our car could go on autopilot to the vet.  No wonder he has gone into sem-retirement.

Hey – is there an on-line dating site where you can meet veterinarians?!  Now THAT would be a good match!!!!