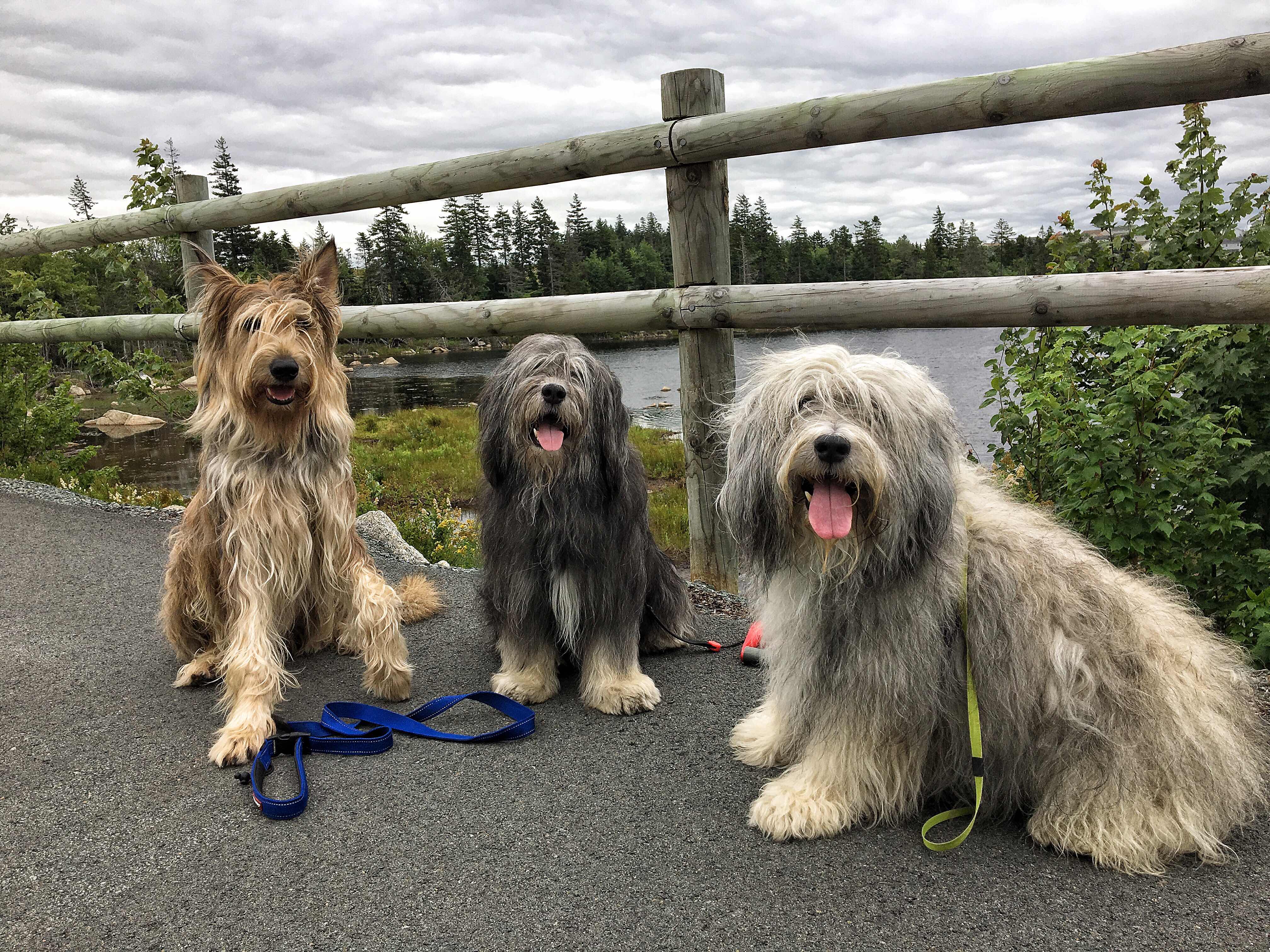 Yesterday morning began quietly.  Actually, come to think of it, it didn’t…

On Friday night my human went up to the golf course to meet some of the neighbors for supper.  When she got home, she took each of us out for a pee on leash.  Well the FG was TERRIBLY interested in some squeaking noises coming from a bush in front of the house.  There was actually quite a racket going on, so my human kept him on a tight lead.  Well the squeaking and squawking did not stop – and it was right outside our bedroom window.  My human thought at one point that she would have to sleep in the DFZ if it didn’t stop.  Clearly some birds were unhappy.  But around 10:30 it stopped, so it was a peaceful night.
However at around 6AM, the racket began again.  She looked around the bushes but didn’t see anything.  So she decided to text Pig Pen’s human who is the resident Mother Nature.  She said she would be right over.  So Mom Nature came over and they began the search, armed with a ladder, and a broom.  All the time while we canines were barking out instructions.  Long story short, they discovered a nest of baby birds who clearly appeared to be in distress.  There were three little guys – crying and crying.  And obviously no Mom in sight.  So they called a local animal rescue group and were told to take the babies to the Emergency Vet Clinc- where they would be picked up.  So Mom Nature cut the nest out of the tree, and my human was chauffeur over to the hospital.  There the techs whisked away the little fellas to feed and take care of them until the rescue center picked them up.
So with that good deed done, the humans were invigorated and Mom Nature offered to go with my human to the local Rails to Trails – with all three of US for a walk.  Rails to Trails are just what they sound like – old railway lines that have been converted to hiking/biking/ cross-country skiing trails.  Pig Pen didn’t come as he was going for a vet check up with his other human.  My human warned Mom Nature that this could be an “interesting “ experience as we had never done this trail before.  I think Mom Nature was having an adrenaline high after the bird rescue- that she didn’t really have a good idea about what she had just volunteered for.
My human loaded us in Ludwig, with the FG in a crate and Einstein and I behind the crate.  By the time my human went to get in the driver’s seat, I had squirmed around the crate and was already in the passenger seat.  I was promptly removed – and put back in my designated riding area.
When we arrived at the trail, Mom Nature opted to walk me and Einstein, while my human handled the FG.  It was a great walk – complete with a total of 6 poops.  Sorry for the “too much information “ – but it is just to emphasize how happy we were!!  After we walked about 2.5 km, we turned around to go back to the car.  We had passed numerous cyclists, walkers and joggers, and had been extremely well-behaved.  But  on the way back we faced something new. Someone walking a dog…
And this presented a problem.  Because when Einstein has been somewhere ONCE, he now claims that territory as his own.  And he had walked this route 10 minutes ago.  So now it was his.  Keep in mind that you can walk Einstein through a dog show, or take him to the vet, where he sees other dogs, and he is FINE.  But walk a road or a trail that he has walked, and it is HIS.   Luckily by this point, my human and Mom Nature had traded leashes, so Mom Nature only had to contend with the FG.
Actually, the FG and I didn’t care about the other dog, it was just Einstein who put on the Cujo routine.  Not a pretty sight.  The next dog they spotted, my human crouched down and stuffed treats in our faces – so Einstein never even NOTICED the dog who walked within 6 feet of us.  That’s one good  thing about food-loving PONs.  After the second dog encounter, they decided to call it a day.  We had walked almost 5km and the trail was getting busier.  It was almost 10AM.
We all crashed when we got home – and even my human had a little nap.  Bird rescue and animal wrangling is tough work!
I can hardly wait to see what adventures await us today!!
Have a good one. Peace and paws up!
Seizure free days: 88