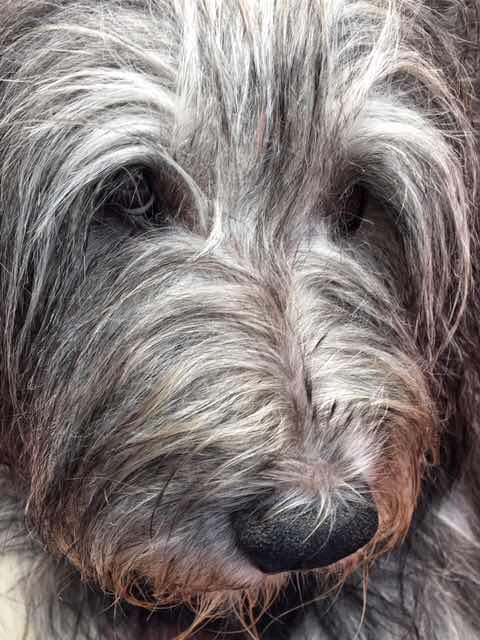 Ya da ya da.  Remember how my human was extolling the good behavior of the FG? And how he seemed to be maturing?  Wrongo. The Tasmanian Devil is BACK.  The well-mannered routine was short lived.

Yesterday my human and Marvin went out for a little while and when they came back, my human let all of us run around outside- with the FG on a long line.  We were racing around on the lawn when suddenly, Einstein put his nose in the air.  And he headed for the woods.  Of course the other two Stooges had to follow, with me hot on his heels, followed by the FG. When my human shouted for us to come back, the instigator immediately returned,  followed shortly by yours truly.  But the FG was playing magician, and disappeared into the brush.  My human went to put me and Einstein into the house and Marvin headed for the lake, as that’s where it appeared the FG was heading. After we were sequestered, my human grabbed a fetch toy and headed for the lake too.  Half way there she found the FG – sniffing bushes. She grabbed his line and headed toward the lake to find Marvin. They met and my human decided to let the FG go for a swim.  She threw the bumper in the water and the retriever wannabe swam out to get it.  And he came back.  But slowly.  My human tossed the toy again, and once more the FG came back – after a few stops to drop the toy in the water and to stare at it.  And it was at that point that my human’s common sense went out the window.  She reluctantly threw the toy a third time.  And that’s when the FG decided that freestyle swimming away from shore was much more fun. Off he headed – leaving my human and Marvin on shore to watch in dismay.  Thankfully he turned around at one point and headed back to shore.  BUT he then discovered Paxton’s rock.  It’s a large rock below the surface about 20 feet from shore.  It’s the rock that Paxton would wade out to, to avoid us PONs.  He didn’t like to swim.  Just to sit on that safe rock.  And now the FG found it. And he sat on it and wouldn’t move.  And all the coaxing, begging and acrobatics by my human and Marvin on the shore could NOT get him to move.  They even pretended to leave him there – and started walking on the trail back to the house.  And the FG just sat there. My human whistled.  And clapped.  And the FG wouldn’t move.  FINALLY she tossed a stitck close to shore and he came in close to grab it.  But as soon as he realized her plan to grab his long line – he started heading back out away from the shore.  It was at that point that my human had had enough.  She jumped in, shoes and all and made a lunge for the line. Luckily she grabbed it. The fetch toy was still floating off shore, but she didn’t care.  The FG was marched back to the house.
So Marvin got to witness the good Picard.  And the regular Picard.  I’m thinking he will be very happy to see his docile, well behaved Saint Bernard when he gets home today.  Mind you, he does have a boxer puppy too…
Now.  For those we were wondering if my human and Marvin were “an item” – I hate to disappoint, but no, they are NOT.  Marvin, in fact, has a spouse who couldn’t come to visit because of work, but who agreed that Marvin should come up – as he and my human have been colleagues for many years.  But having Marvin here has been great fun- and it got me thinking that maybe it’s time my human should get back into dating.  It’s been a few years since the Hulk (remember the guy who we nearly dragged into a ditch while we were being dive bombed by a duck?). Anyway, I’m not really sure whatever happened there- my take is that he had lots of other “stuff” in his life, and so a long distance relationship with us just didn’t work out.  Pity.  He was a real pushover, er… softy when it came to us dogs. We went through more biscuits in a week while he was here than my human gives us in a month.
Apparently Facebook is going to start a dating service. Could be interesting.  One thing I know for sure,  ANY potential date would HAVE to like dogs.  A LOT.  And let’s face it, we are not just any dogs. This could make for  some VERY interesting blogs….
Today we are having company for dinner.  We have been instructed to be on our best behavior. Whatever that means.  My human said some very nice humans are coming….and they are bringing their dog!  A Picard!   Stay tuned….
Have a good one.  Peace and paws up!
Seizure free days: 84