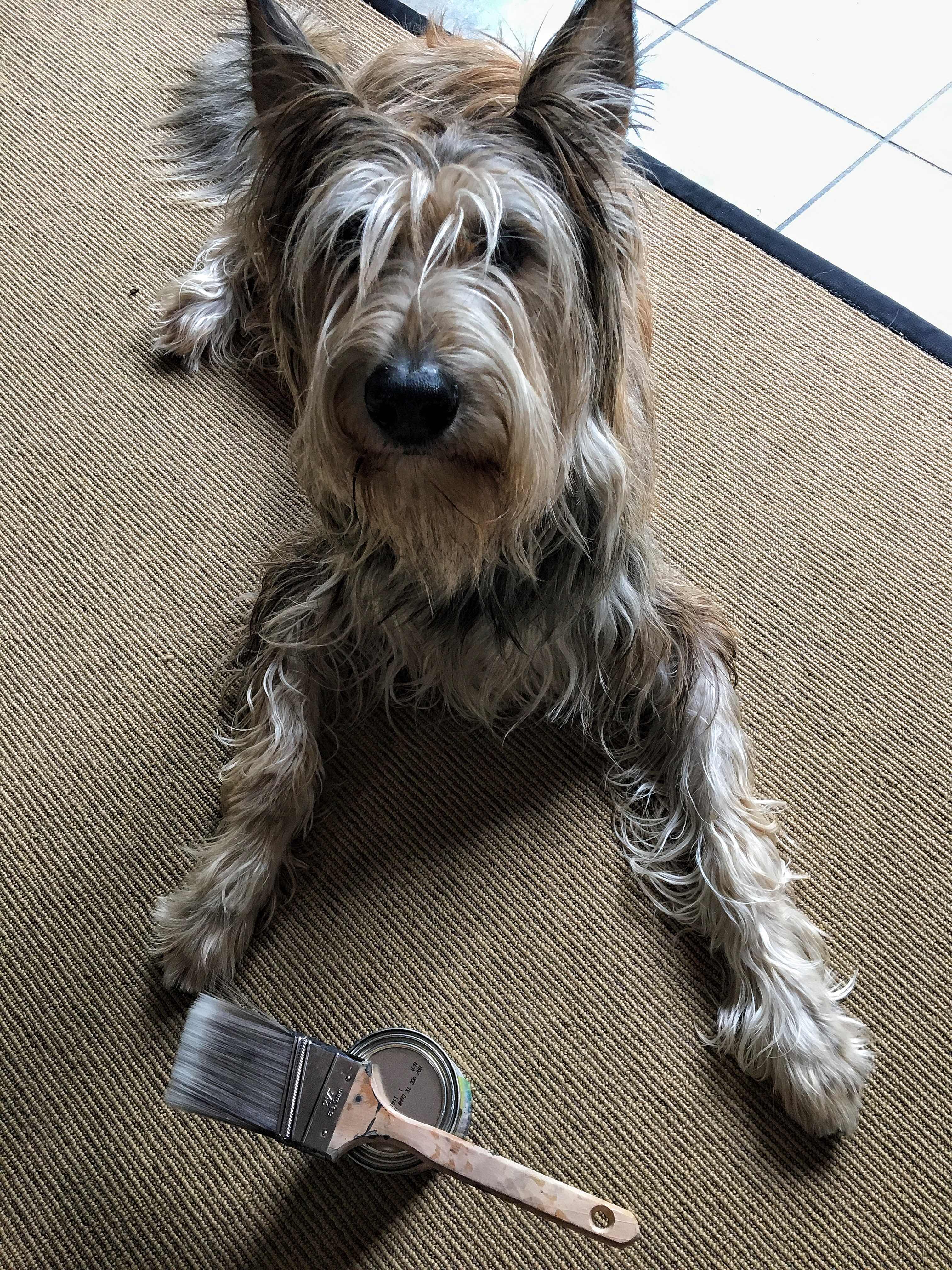 What was she thinking?  Sometimes my human has what she refers to as a brain fart and she does something that clearly does not involve much thought…

Since the deck is pretty well finished, she is now on an “interior” decorating campaign.  She has decided she wants to paint the kitchen, dining room and hall.  It was just done a few years ago, but she never loved the color.  After it was done, she didn’t want to change it – because it was a big job.  One thing she learned was  that just holding a 2×2 inch color swatch up to a wall doesn’t REALLY give you the full idea about how the color will look on all the walls.  No kidding.
Anyway, this time she went to several paint places and brought home loads of little swatches.  But this time, when she picked her favorite, she decided to test the color first.  She bought a “sample can” to paint some on the walls to get a better idea about what it would look like.  Good idea.  Until the brain fart.
She brought the paint home and then took us out to pee- so she could concentrate on the task at hand.  We went out and came back in quickly because it was drizzling rain.  We all settled down to watch what she was about to do.  She got her brush, can opener and some newspaper to put under the can.  She picked a spot on the wall and painted about a one foot square.  Hmmmm.  She thought she liked it, but figured she should do more.  So she put more on and painted an area down to about three feet from the floor.  And of course, it was exactly at that point that the FG, fashion and decorating consultant, HAD to come over and put his nose right up to the wall- just as my human had stepped back to look at her work. “Aggghhh” she shouted.  Serious brain fart.  Did she honestly think he wouldn’t inspect it? He turned around with a newly decorated nose.
After she quickly wiped the paint – which thankfully came off with water, from his nose, she THEN sequestered us for the 15 minutes it took the paint to dry.  I like the color.  It’s called PON gray.  Well that’s what I call it.
My human has a good friend who is going to help with the painting.  He offered to do it while she is working but she didn’t think it fair to subject him to dog wrangling while painting. She will soon be on vacation- so they’ll do it then.  I can hardly wait for the furniture moving.  I BET we will find some dog kibble under the sideboard from when she throws kibble to keep Einstein quiet in the mornings.  I’ll be right there when they move that thing.
Well it’s Tuesday and the last crazy busy Tuesday for my human at work.  Then she has an easier week – and as of August 1 – she is ON VACATION!!!  And we can’t WAIT!!!
Have a good one.  Peace and paws up.
Seizure free days: 56

One thought on “Brain fart”