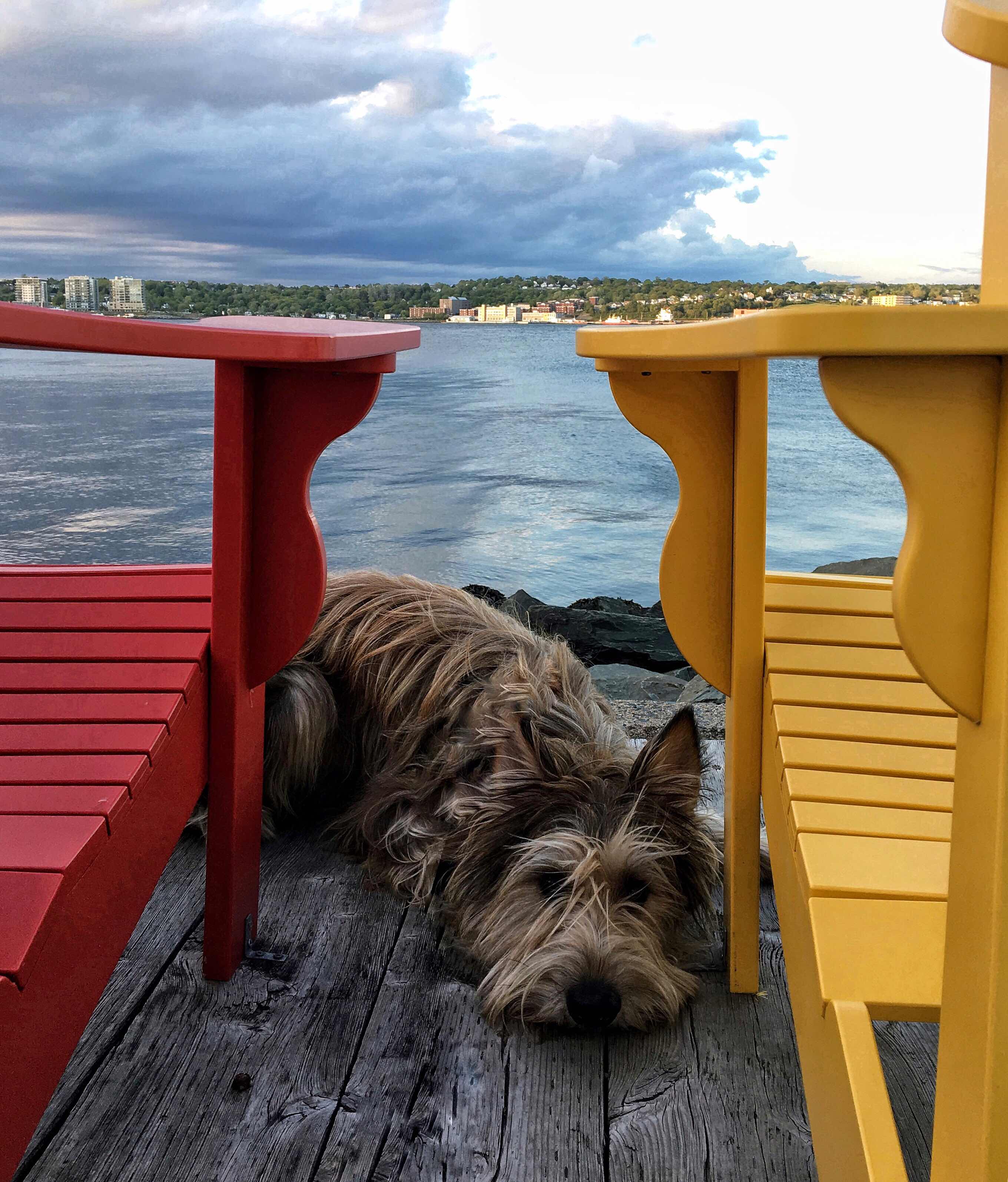 Life is pretty boring these days.  Why?  Because of the deck. It is beyond the normal annual scrape and touch up stage.  It needs MAJOR scraping, some boards need to be replaced and it needs a new paint job. My human has been scraping every chance she gets, and for some odd reason, she doesn’t want our help.  So we sit inside with our noses pressed against the glass, supervising every move.  It guess all our peeing out there didn’t cause the paint to disappear.

When we are allowed on the deck (when there is no scraping going on) we can’t go down the stairs because there is a gate at the top of the stairs.  And the gate is always kept closed…
The other night, my human had a friend come over who offered to help with the deck.  At one point, my human went into the house and into the garage to get something, and her friend followed.  What neither of them noticed was that the door onto the deck was partly open.  So when they came back in, my human did a quick dog count and she was missing one.  The big one.  She went onto the deck, figuring he would be there eating paint chips, but he was nowhere to be seen.  Because the gate at the top of the stairs had been left open. Her friend said “He’ll come back, won’t he?” My human laughed and said “maybe….” She went out to the back of the house and spotted him.  And of course he spotted her – and he bolted down the trail to the lake.   My human came back in the house and got Einstein to help. She took him to the head of the trail, and said “go find Elroy.”  He looked at her like she had three heads, turned and headed back to the house.  “Hey Lassie, help me out here,” she pleaded. Einstein happily trotted back home.  As Einstein was heading back, out of the bushes like a freight train came the crazed Picard.  Wet and wild.  He ran past my human and threw himself onto the lawn.  Einstein just rolled his eyes at him. My human calmly walked over to him (while her brain was screaming “DON’T YOU MOVE,”) put a leash on him and guided him back in the house.  And back she went to join her friend in the scrape-a-thon.
On Friday night she took a scraping break and somehow the FG got to go downtown for a walk on the boardwalk.  He reportedly behaved.  He was making up for his disappearing act the night before.
Yesterday she again spent several hours scraping.  I voted we get one of those fancy composite decks so she never has to do this again.  She asked if I would like to cut my down on my treats so she could afford one of those fancy decks.  I told her to keep scraping.
Have a good one.  Peace and paws up,
Seizure free days: 23