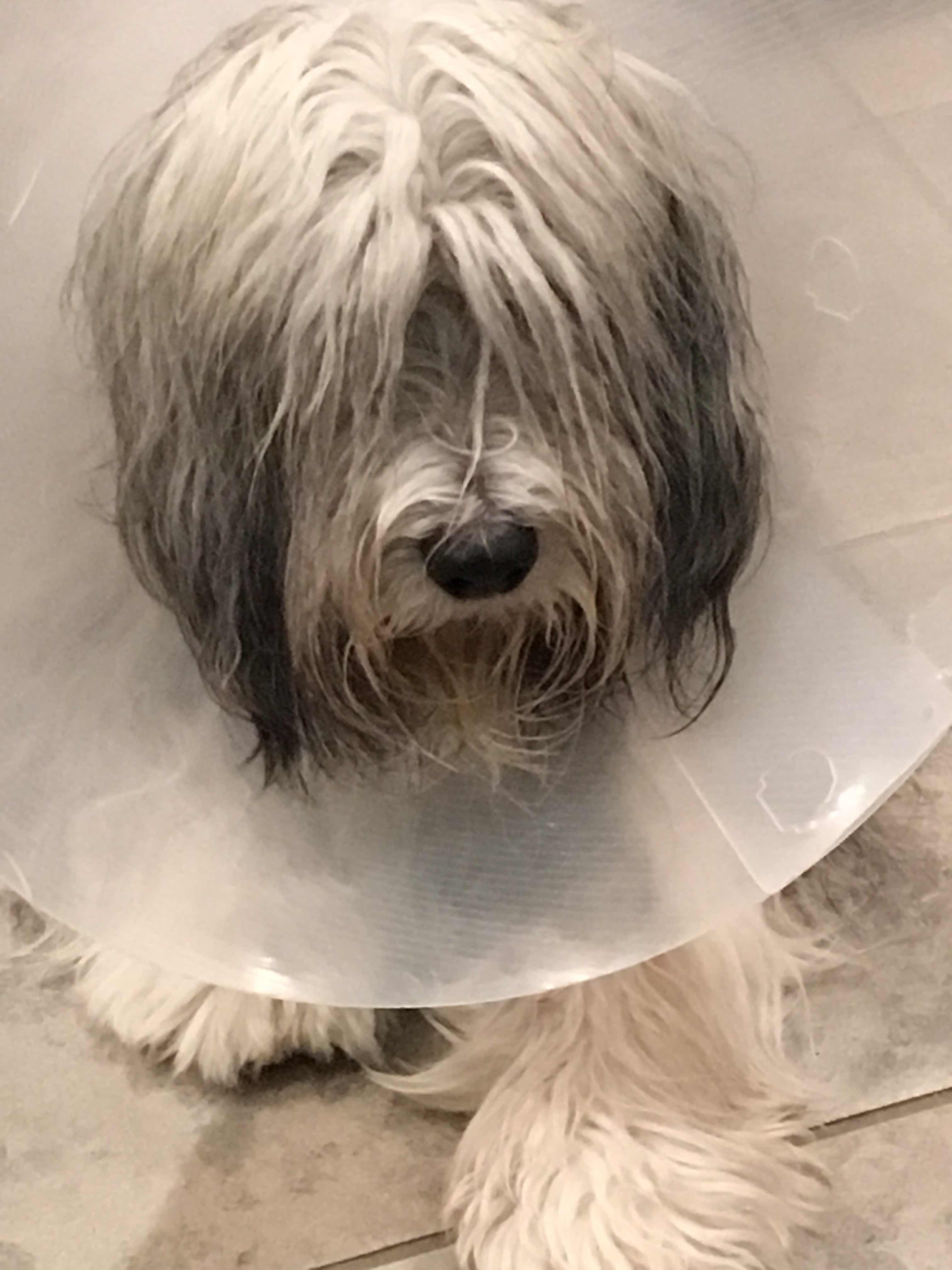 And so the drama continues…

When my human went to work yesterday, we  three amigos were all separated.  Cone-head was in the front hall, Butt-head was in the run in the garage, and yours truly had free reign in the house.  I won the coin toss. When my human got home from work, Cone-head was happily waiting in the hall, and he seemed fine. For about 5 minutes.  And then the squeaking began – and it was clear he was in discomfort.  Again.  My human tried to get a look at the area, but he wouldn’t let her- he kept squirming.   She knew that our vet would be closing in less than an hour, but she called and pleaded.  The woman who answered the phone said they were fully booked, but a tech could look at Cone-head.  My human said she would be there in 12 :minutes- it was better than going to the Emergency again.
My human left Cone-head in the car and went in.  The waiting room was packed.  I mean PACKED.  But, I think because my human has frequent flier miles there, the tech was called and she immediately came out.  My human had to return to get Cone-head from the car.  And he was whisked in past the waiting crowds, wearing the infamous cone.  Like some kind of celebrity.  A celebrity wearing a lampshade.
My human didn’t go in the back with him- as she usually does, because she KNEW they were lucky to be seen at all.  She could hear Come-head’s dramatic cries from the waiting area.  Now before you start saying “awwwwwwwww….poor Frodo,” remember this dog screams when you brush his paws.  Really.   Anyway, when the tech emerged with Cone-head who was CLEARLY ready to go home, she explained that they shaved more hair in his nether regions and low and behold, his scraped jewel had a bit of an infection.  Yowza.  No wonder he was uncomfortable.  My human figures he was crying either from the infection or the fact that he didn’t want to be shaved to have his private parts revealed for all the world to see.  Good thing he isn’t entered in any dog shows any time soon.
Cone-head came home and had new medication to take.  My human kept Butt-head in the hallway for some of the time – so that Cone-head would settle down.
So we’ll see how this new medication works.  One thing I know for sure, when Cone-head is squeaking and he looks particularly miserable, if my human says “would you like a treat?” the moaning immediately stops. I mean totally.  I realize Cone-head IS sore – but he is going to milk this as MUCH as he can.  Good one, Cone-head.  Go for it.  He’s getting LOTS of treats.  And of course, we are sharing in his misery….
TGIF!!!! Have a good one.  Peace and paws up!
Seizure-free days: 9