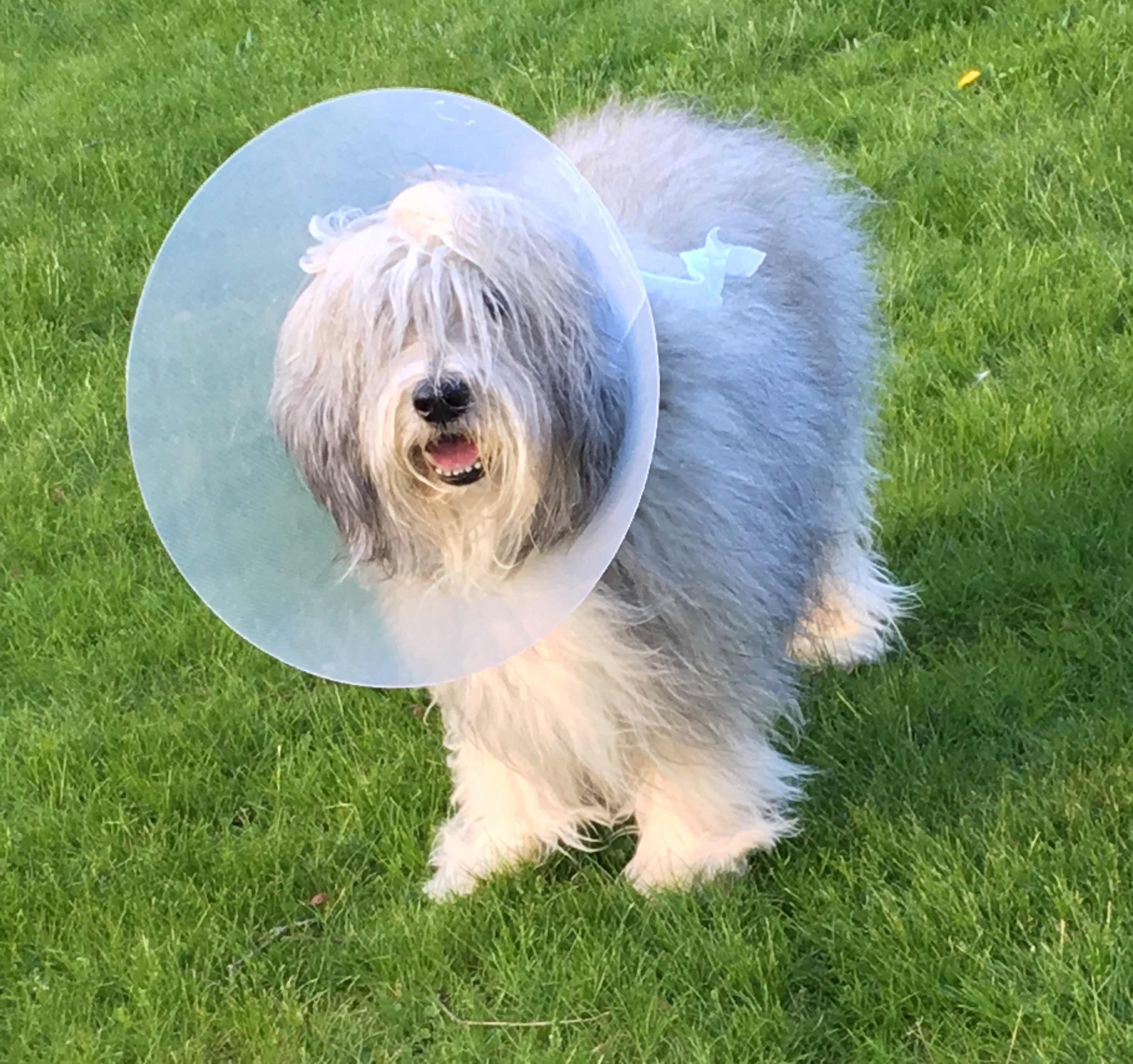 You know the old saying, it’s all fun and games until somebody ends up in a cone….

So you may recall the torn nail the other day.  The one belonging to Einstein.  The one that my human bandaged.  The one that appeared fine.  And it IS.  But the problem after the unfortunate injury did not have to do with Einstien so much as it had to do with me and the FG.  We were nurses in another life.  And we wanted to FIX that nail.  By licking it.  My human had to constantly keep telling us to stop showering Einstein with “affection.”

Monday morning,  Einstein appeared fine.  He pooped and peed and ran around and ate his breakfast like normal.  We even went for a nice long walk with our buddy, Pig Pen.  The FG went for a good walk, but still when he came back, at every chance, he would go after Einstein.  My human had a funeral to attend, so she left the FG in his crate.  She examined Einstein, and although he did attempt to lick his nether regions a few times, he seemed OK.  After the funeral, my human had a few errands so she got home mid-afternoon.  She let the FG out of his crate and he immediately went to sniff Einstein.  Who by this point was starting to bite the FG on his face.  Clearly not hard enough, because although he would squeak, he would go back after Einstein again.  My human figured something was really wrong.  She called another 24 hour clinic – because remember – this was a holiday and our regular vet was still not open.   They suggested she take another good look – it could definitely be an anal gland problem.  Back they went on the grooming table.  My human searched his rear end (the stuff that dog people are used to doing), and noticed nothing.  And then, she touched his privates.  Ooooo-eeee.  She found the problem.  She couldn’t get a great look – but it appeared that one of the family jewels was quite red.  Problem solved.  Sort of.  Now what to do.  Go to emergency, of course.

I should have prefaced this whole story by reminding you that Einstein IS a COMPLETE drama king.  I mean you brush him and you would think he was being tortured.  So IMAGINE a scrape in the nether nether areas…

The vet examined him (with lots of assistance and much moaning and groaning – by Einstein – not the vet) and said that the jewels were safe, but he did have an abrasion.  My human figured that it probably happened while racing over a log or through branches out beyond the trail.  The vet gave her some cream to put on the spot (good luck with that) and some medication for pain.  She said it would relax him.  My human asked the vet if she could take some herself.  The vet did not laugh.

Along with the cream and the pills, they came home with the cone of shame.  The vet didn’t want Einstein licking at the sore area.  My human should have really got cones for all three of us.  Big mistake on her part.  Actually, when Einstein growls at me – should I attempt it, I DO back off.  But Mr. Stubborn?  Not so much.  Hopefully the sore will heal quickly because right now, my human can’t leave the two of them together.  It is total chaos.  TOTAL chaos. Barking, lunging, poking, snapping, squeaking – it’s crazier than a session of Congress.

At the end of the day, one REALLY can’t be mad at the FG.  It was his persistance that alerted my human to the problem.  Sort of.  I think she should give the guy credit for trying to help out.

Please say a prayer that this heals quickly.  Or my human will be locking HERSELF in the crate.  And taking a few of those pills….

Have a good one.  Peace and paws up!
Seizure-free days: 7