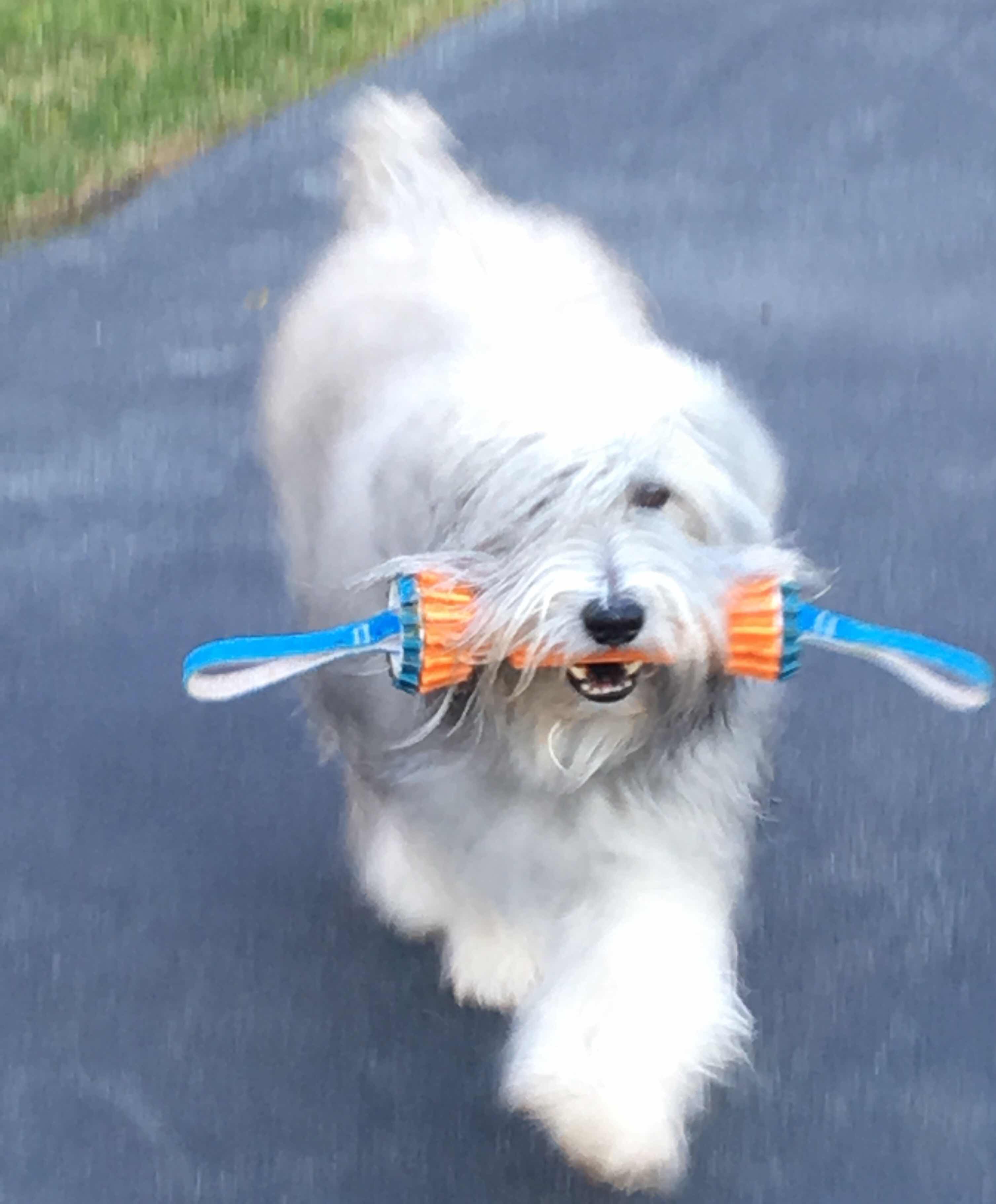 So the experiment involves a colony of rabbits.  The experimenter would place them on the front lawn. Of our house.  Somehow.  And then the experimenter would open the front  door to our home.  With two PONs at the front door.  Seems like there would be a pretty simple hypothesis about what would happen.  But wait.  I forgot to add one important element to the experiment.   Rain.  It would be pouring rain.  And it would be windy too.  Now, what’s the hypothesis?  I would say that one PON might venture out to chase a rabbit or two.  But would quickly come back.  That would be me.  I am not a huge fan of rain.  Especially if I was forced to wear a raincoat.  Einstein?  I predict, with 99.9% accuracy that he would NOT go out that door.  Nope.  Not even a husk of rabbits could make him go out.  A husk of rabbits waving dog treats.  Nope.  He wouldn’t go.
And so was the scene yesterday morning at 5:30AM.  I still got up at our regular time even though it was the weekend, but there was no anxious spinning and barking to go out the door.  None.  I did approach the door – when my leash was put on, but Einstein retreated to a spot under the dining room table.  He had NO intention of going out.  He heard the rain.  The FG just watched the proceedings.
I got to go first.  And let’s face it – who can poop while wearing a raincoat?  True – the coat doesn’t obstruct anything – but it just doesn’t feel right to poop in a coat.  So we walked.  And walked.  And WALKED.  Trudged is more like it. When my human had no luck on the road or around our house, she put me the the vehicle, drove me down the road to the trail (which was her last resort)and took me out there.   And I finally went.  Then it was Einstein’s turn.  First she had to catch him.  He circled under the dining room table.  Then he squirmed as she put on the ill-fitting plaid raincoat.  I got to wear the flashy blue one, but it was already too wet to wear.  Instead of dragging him up to the road, once she managed to get him out the door, she took him into the backyard.  I had warned him as they went out that my human was NOT giving up.  She was already soaked, so she was determined to get results.  For a change, he complied rather quickly.  And then it was the FG’s turn.
First off, there is no coaxing with him.  Rain, snow, hail – he doesn’t care.  Mind you, by the time it was his turn, my human didn’t even feel like putting on another raincoat, so he went out naked. No worries with him really – he’s wash and wear anyway.  AND , thankfully for my human, he is a power pooper.  You tell him, and he goes.  They were back in the house in no time.
The rest of the morning we lounged around as we didn’t want to go anywhere.  Bonus for my human who took advantage of our low energy, and went back to bed for about an hour.
Today is a holiday – Victoria Day – a day to celebrate Queen Victoria’s birthday.  Wonder what she would have thought about the wedding the other day? I thought the bride looked lovely.  The FG thought that dress would have been perfect to rub his face in.  My human watched the entire proceedings.  Kind of like watching a live fairytale.  Good luck to the couple.  May the fairytale continue, even when you have to pick up your partner’s stinky socks from a heap on the bathroom floor.  Wait.  They have servants for that, don’t they?  Anyway, we do wish them well.  Even though our invitation never arrived in time….
Have a good one.  Peace and paws up!
Seizure free days: 5