After the FG’s ambassador tour, they came home and I thought we would just relax.  But my human kept looking at the time and looking up the driveway.  Clearly someone was coming.  She made a strange move – she put me and the FG out on the deck, but kept Einstein inside.  The FG and I pressed our noses on the freshly cleaned glass deck doors to look inside. And then we heard a car pull up.  It was Milo.  And his human.

Milo is a VERY cute Coton de Tulear – a breed of dog from Madagascar.  Milo himself didn’t come from there though – he was born in Nova Scotia.  Get this -Milo and Einstein and I had the same treasurer.  She breeds both PONs and Cotons.  So we are really like “family!”  My long lost brother from a different mother.  And father.  I actually nicknamed him Mighty Milo. 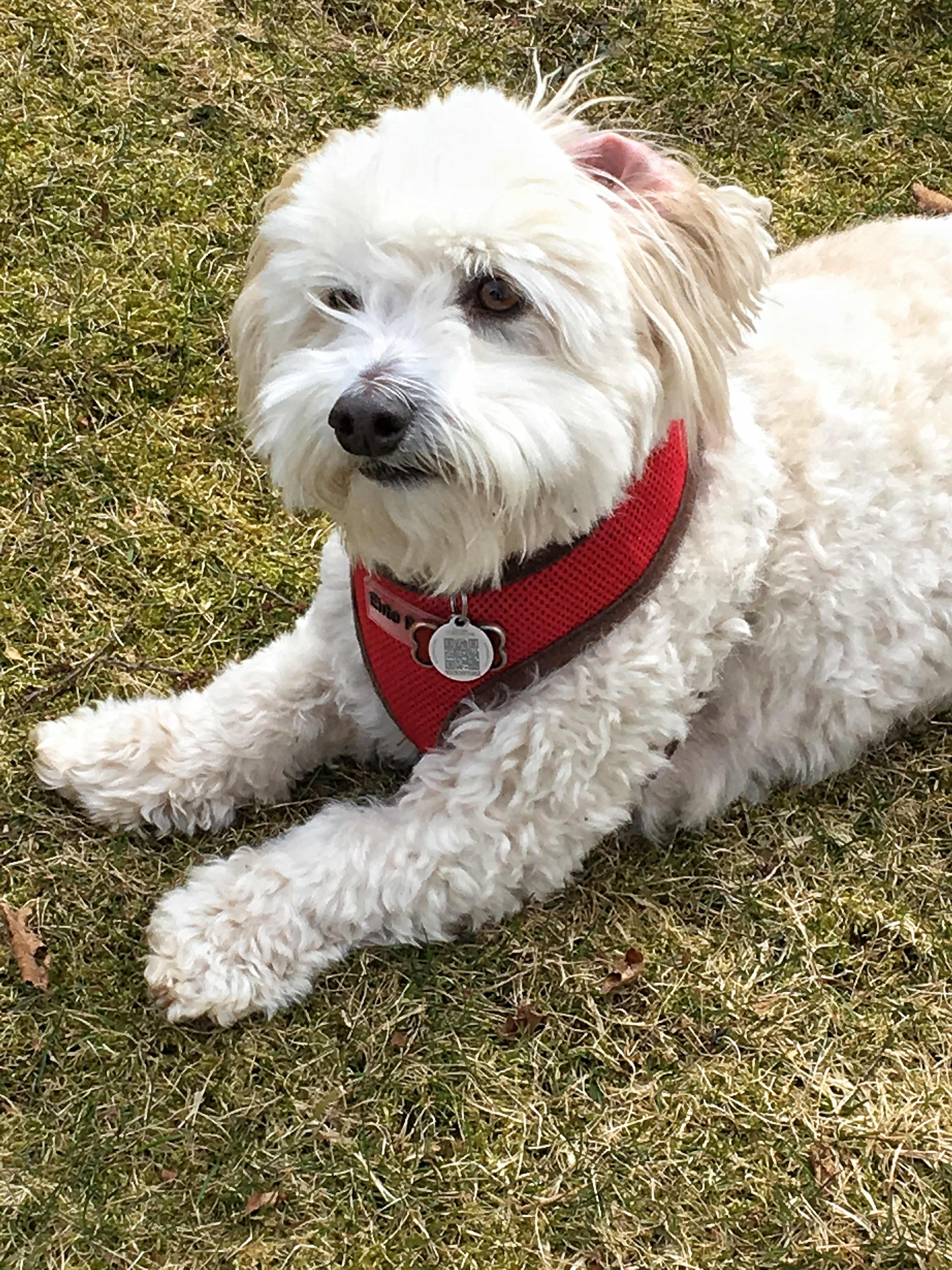 Mighty Milo’s human is a friend and colleague of my human’s.  She was actually a student of my human many years ago and she lives in New Brunswick, Canada.  She was down this way visiting a family member.

When Mighty Milo arrived, my human let Einstein out first.  She figured that having the three of us investigating the guy at the same time might be a bit much.  So he and Einstein got acquainted and then she brought them inside. And then she let me and the FG in from the deck.  The FG was crazy about him – and Milo quickly told him that although he likes to play – raucous behavior indoors was not a good idea.  And Poke-a-Coton was not a game he enjoyed.  I circled around him quite interested, but I learned he does not appreciate extended butt sniffing.  After a short time, Einstein and I went outside with him. The FG stayed in- because my human had visions of him taking off in the woods followed by a Coton – and the FG’s day had been great so far – so why ruin it?!
Outside, Mighty Milo did the zoomies  and Einstein and I just stared at him like he was some kind of ground alien.  We got along well – although I am calling him Mighty for a reason – he is NOT, and I repeat, NOT a small dog in attitude!  I actually quite liked him!
We attempted a photo – but as you can see, Mighty Milo only wanted to get so close.  Who can blame him – he was outnumbered.  Not that it mattered to him!!
I really hope he comes back again some day.  I actually think I would play with him.  He fascinated me!
So that was a super day!  Which made up for the night before…. Let’s just say that Einstein and I did something REALLY, REALLY bad.  My human was actually not speaking to us when Mighty Milo arrived.  Good thing he came – and we were WELL behaved.  His arrival broke the tension… I’ll share our horrible deed tomorrow…
Have a good one.  Peace and paws up.
Seizure-free days: 11