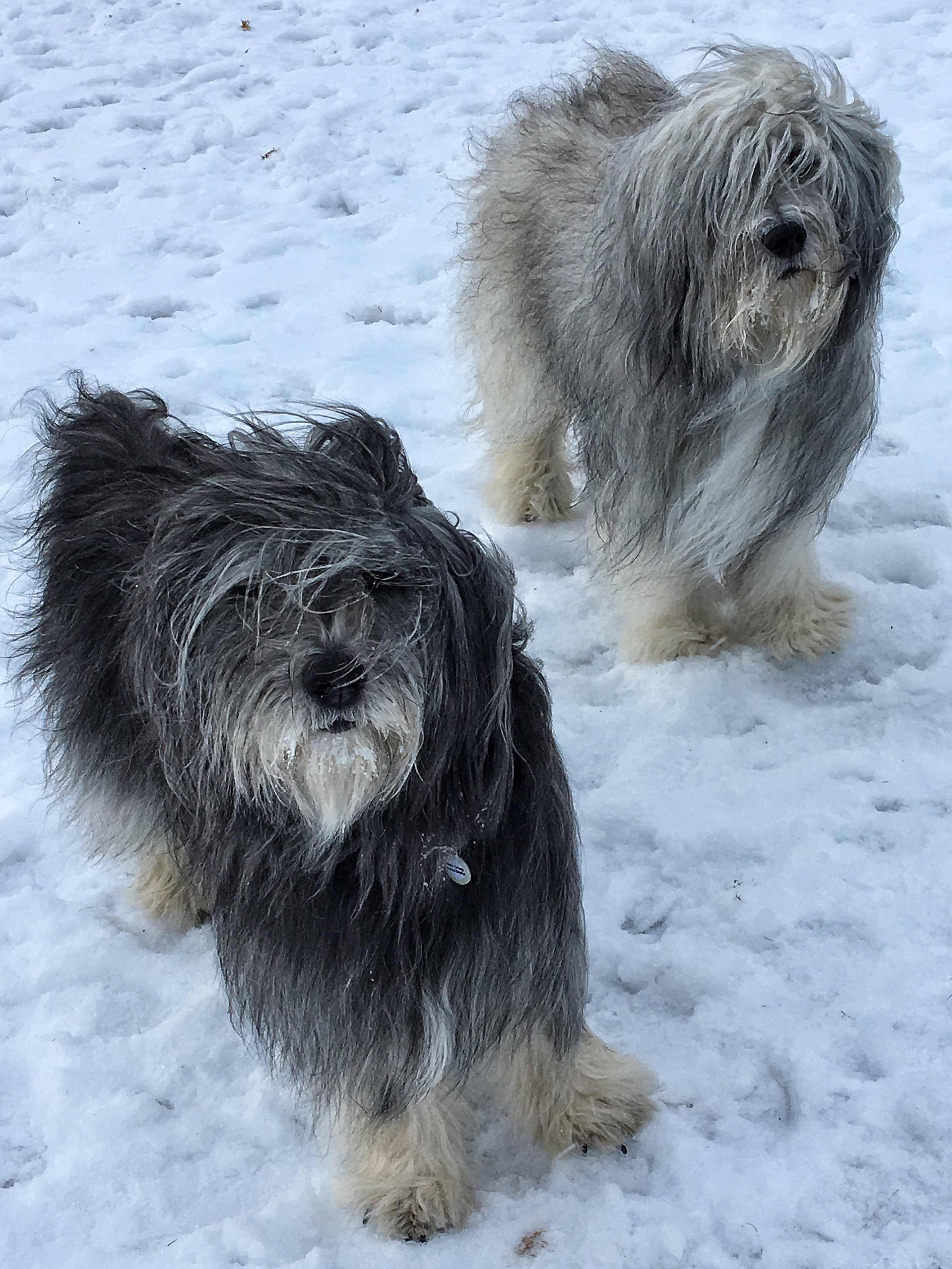 My human has a friend – Joanie – who I believe I have talked about before.  She is the one that the FG gave a bloody nose at Christmas time.  During the annual wine drinking/junk food eating evening.  Anyway, despite the fact that coming to our house CAN be dangerous, Joanie still does – whenever she is in town.  And she was in town this week, and asked my human if there was anything she could do to help out during this challenging time.  Joanie even suggested that she and my human take all three of us dogs out for a walk together.  Yes, the woman is a glutton for punishment.  And my human, in her dizzy state, thought that would be a good idea.  She actually thought it would be good to take all of us to that fenced baseball diamond just down the road a few km.  So Joanie arrived – put on her armour, and my human loaded up the vehicle. First she had to get the FG in the crate. Which was FINE but then he screamed like he was being murdered when he realized that Einstein and I were also coming – and we were stuck in the rear of the vehicle behind his crate.  My human wedged us in, shut the hatch door and Joanie got in the passenger seat.  At which point my human realized she didn’t have her phone so she went back in the house to get it.  It was at that point that I squeezed myself between the FG’s crate and the driver’s seat in an attempt to drive myself.  And I was stuck.  So my human came, somehow dislodged me, and put me again in the back of the vehicle.  While the FG screamed more.  Ah.  good times.  And we hadn’t even left the garage.

When we got to the baseball field, my human pulled up close to the gate.  And she explained to Joanie that she should grab one PON and my human would grab the other.  Joanie opened a side door and my human opened the hatch – simultaneously- and each of them grabbed a PON.  They then led us into the field and let us loose.  Then my human went back to the vehicle to get the FG out of the crate – and got him and let him loose.  I should mention that they did this at the crack of dawn so as not to be there with other dogs.  Yes, Joanie is a very good friend.
We all proceeded to explore the field.  Peeing and sniffing like crazy.  My human got a couple of sticks to toss – and the FG and I reterived while Einstein rolled on various patches of snow.  The FG tries hard to play with us – jumping and running.  Here is a shot that Joanie captured of one of his jumping moments. 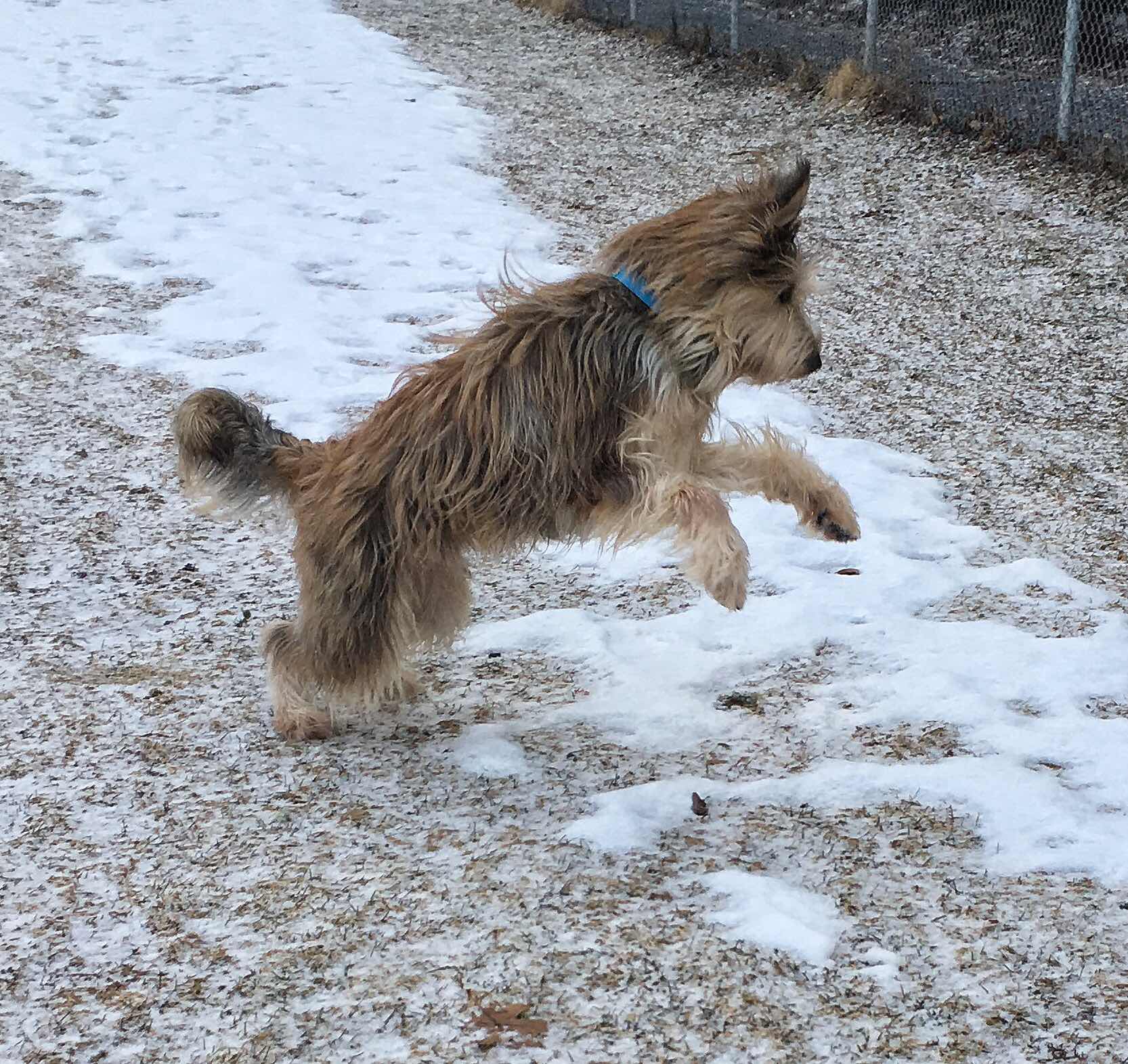 Joanie and my human came to the conclusion that he RARELY has four feet on the ground.  He and Einstein DID chase around a bit.  Actually it was Einstein who was basically trying to kill him.  Not really.  But he certainly gave the FG a couple of good runs. And here is a rare shot captured by Joanie of the FG and I sharing a stick. 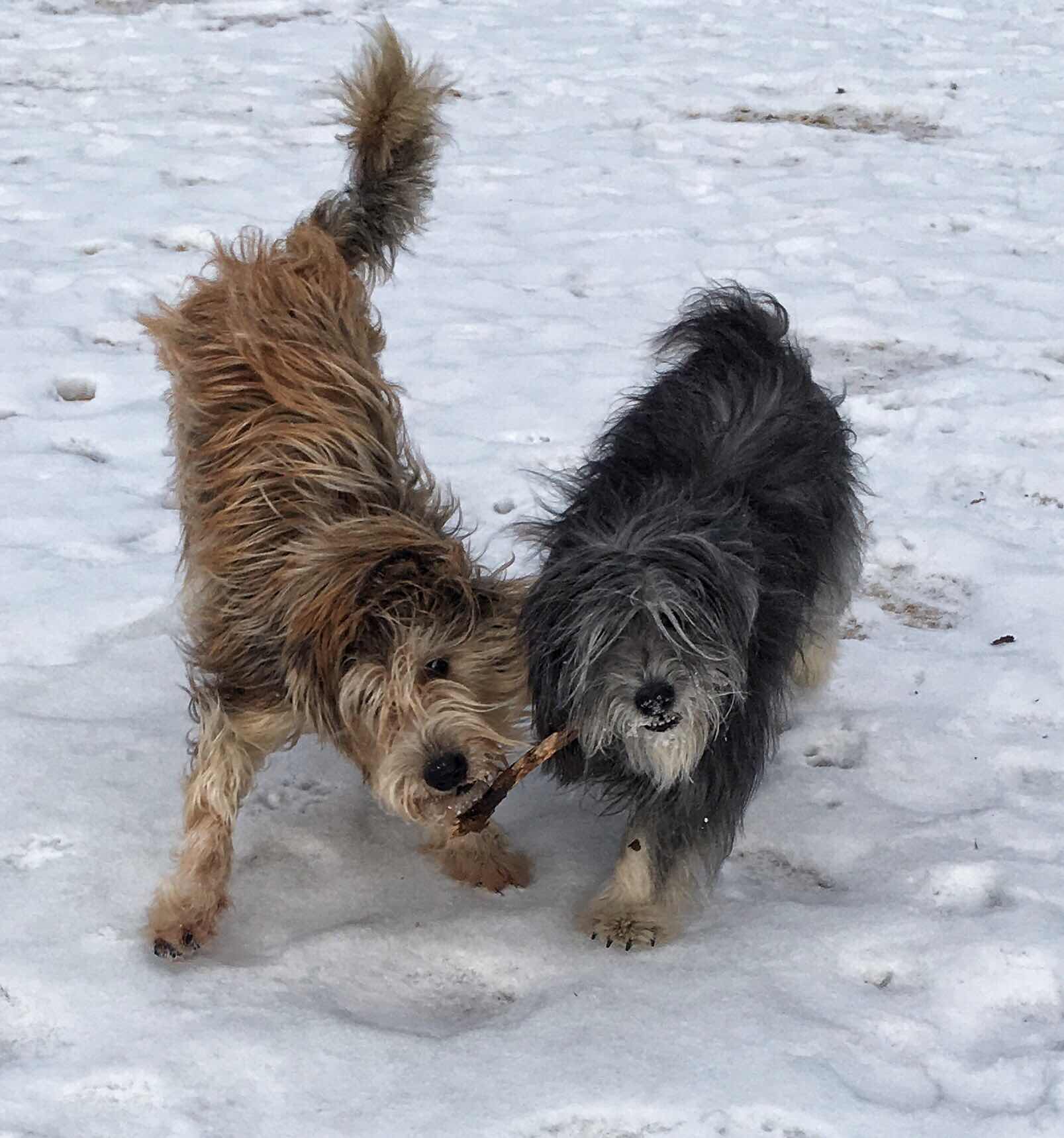 This lasted for all of 8.4 seconds and then I gave it to him.  I was MUCH more interested in the treats my human had in her pocket.

And just as the joyful trio was starting to wear down, a car pulled up.  My human didn’t notice until she saw the gate opening and a large yellow Lab entering the field with his human.  “Uh oh” she said as she gestured to Joanie.  But before she could grab us, the Three Stooges Welcome Wagon bounded over to the unsuspecting Retriever. And surrounded him.  The FG was in his glory because now, MAYBE someone would play with him.  There was lots of spinning and butt sniffing and then, in a rather rude welcome gesture, Einstein decided that this dog needed to know that HE was the king of our pack.  So he tried to mount the Lab. The Lab wanted nothing of Einstein’s advances, and growled.  Well, Mr. Sociable growled back.  And it was at THAT point that my human magically swept in from a distance of about 10 feet and grabbed Einstein by the collar. “Party is over” she said.  In the meantime, I was hanging off her pocket trying to get the yummy treats. I didn’t care about the Lab.
Somehow my human managed to leash me and Einstein while poor Joanie was left to corrale the FG.  The Lab’s owner said, “What kind of dog is HE?” My human heard the question and it’s at moments like that when she has to decide what to say.  If he’s NOT behaving, she says he is a wolfhound coyote cross.  If he IS behaving, she says Picard. Just kidding.  Sort of.  Anyway, yesterday he was a Picard.
Joanie managed to drag him to the car, and they got him loaded on board. We PONs had already been fired in the back.
After the FG was in his crate and the two humans were in their seats, they looked at each other, smiled and shook their heads. But no bloody noses, broken bones or lost dogs – so it was chalked up to a successful outing.
This outing would have been REALLY hard without Joanie.  But she didn’t mind, at all because, to quote Dionne Warwick “that’s what friends are for….”
Have a good one.  Peace and paws up!
Seizure-free days: 6