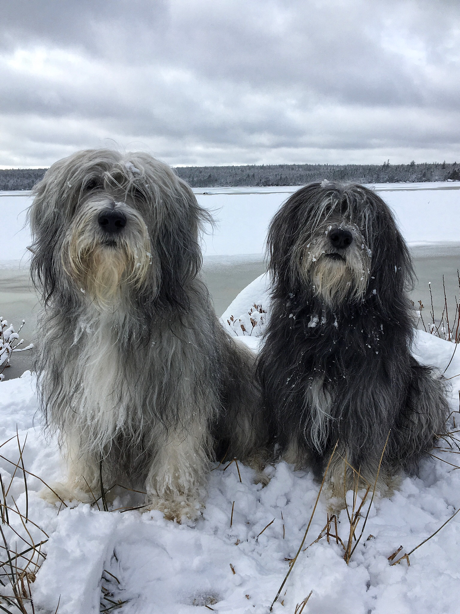 So what’s new in the world of dogs (besides dog shows)?  Well on the local level, Einstein and I got to meet our new neighbor.  He lives in the next house up the road – and his name is Max.  He’s a multi-breed, mostly shepherd puppy and he is about 4 months old.  When Einstein and I went out for our long walk Sunday morning (before my human took the FG to the show), we were coming round a bend in the road and Einstein started sniffing the air and pulling like mad.  And sure enough – there he was – going for a walk with one of his humans.  He’s a very friendly guy, and after we all had good sniffs, there were waggy tails all around.  Of course, Einstein had to bark his approval and wanted to play with Max.  I, on the other hand, just sat back to watch.  As you may recall, puppies are really not my “thing”.  I mean they are OK – but I would rather play with a rabbit.  Well, maybe not “play” – but  that’s who I would be more likely to chase around.  I must be part hound.

And in the last bit of dog news, they are trying a new dating idea for singles in British Columbia, Canada.  It’s a lounge where dog owners can come with their dogs to mingle and meet other single dog owners. The dogs get to play while the humans can have a drink together and see if everyone can get along.  Brilliant idea.  Unfortunately, it wouldn’t work for my human because first of all it’s on the other side of the country and second of all, only dogs under 30 lbs are allowed.  Seems like discrimination to me. Yeah, yeah.  I guess they don’t want the big dogs to hurt the little dogs.  Mind you, some little dogs can be pretty darn tough!!!! And why do they assume that little dog owners would be best matched with other little dog owners? I think I need to open my own version on this side of the country.  My next money making scheme….

Have a good one!
Peace and paws up!
Seizure-free days: 1