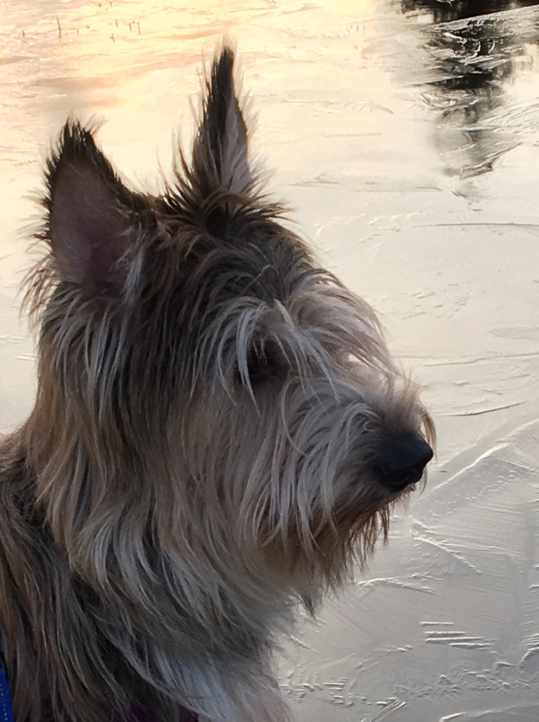 Well the shows are over.  As they say in the dog show world “no love for the Picard” on Sunday.  But my human felt he showed well – and this time they did no dance routine in the ring.  One has to be open-minded when it comes to showing dogs in conformation.  To win, you have the opinion of a particular judge – and let’s face it – the decision is totally subjective.  For example, we saw a dog this weekend win BEST IN SHOW – and in another show, that same dog did not even win the breed.  Still – you know that going into this and even though you THINK that your dog is deserving of a ribbon – that’s your opinion!  And we all know, my human took THE best Picard home last night!

Meanwhile, back at the ranch, we PONs demonstrated our disappointment about not going to the shows by acting out.  A BIT.  For example, when out on our walks, we trudged along as if in a funeral march.  At 2AM Saturday, my human heard a ratting sound in the kitchen.  It sounded like I was next to a cupboard – and having a seizure.  She bolted up and found me counter surfing in the kitchen.  Einstein has been barking ALL the time.  I mean he usually barks a lot – but since this dog show thing, he keeps shouting out orders at my human. “Get up.  Take me out. Where’s my food?  Where’s my treat? Elroy stop looking at me.”  He was also sure to do that at 2 AM.  On Friday, when the FG got out of the vehicle after coming home from Meet the Breed, he ran into the run in the garage, and brought into the house one of those rubber eggs we got last year for Easter.  At one point on Friday night, my human was in the DFZ and she heard a strange chewing sound.  Einstein was carefully destroying the egg – bit by bit.  And on top of all of that – someone ate a HOLE in a sweater that was draped on a chair in the dining room.  My human replayed the tape on Big Brother – but the angle is hard to see.  For sure it WASN’T me.  Now it is possible it was the FG – BUT Einstein was  also in the picture close to the sweater.

Anyway, we are glad THAT show is over.  And I must confess, we did get a pile of leftover treats when they got home and that certainly helped.  So that wasn’t so bad.

Unfortunately, on a bad note, though,  I had a seizure at 12:30 AM this morning.   My human was so disappointed.   Let’s just hope it will be the only one… I had been doing so well.

Have a good one.  Peace and paws up!
Seizure-free days: 0