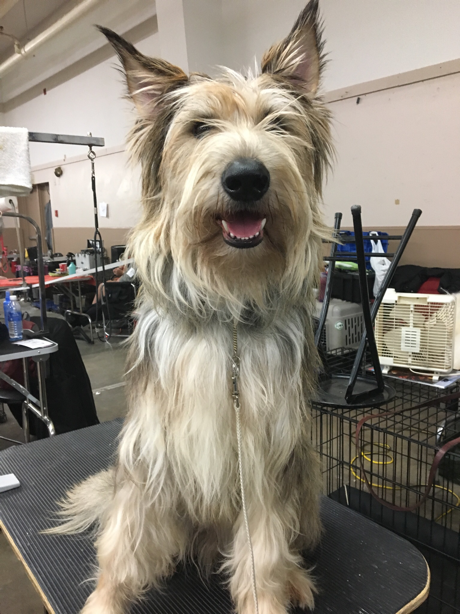 Well after all that packing, preparation, fluffing and puffing, the FG came home with a couple of tiny ribbons.  He won the Breed.  Mind you, he was the only Picard there.  But still – a ribbon is a ribbon.  In this case it was an example of “if you show up,” you get one.  But even that COULD have gone sideways at one point…

When my human went to take the FG in the ring, he had been waiting for a couple of hours.  That’s what humans do – they get there early to fluff and puff their dogs – unless they own a short-coated breed like a boxer.  But still – almost everyone arrives early.  Then you wait.  So by the time it was the FG’s turn to go in the ring, he was raring to GO.  My human suspected trouble when they went around the ring the first time and he scooped up some piece of fuzz or something as they were running.  Then came his turn to go “down and back”.  For non-dog show people, this is the point at which the judge has physically examined your dog and now he wants to see the dog running away and then back towards him.  The judge COULD be a woman – but in this case it was a guy.  So my human ran away with the FG.  And all was fine.  And then they started coming back and the FG decided it was time to jump and gallop.  And my human did what looked like a dance move as she suddenly lost his leash.  And in that .0008 seconds she envisioned the FG on one of his wild running sprees.  She awkwardly grabbed for his leash and caught him JUST as they planted themselves in front of the judge.  The judge just looked at her and said “try that again.”  Oopsie.  The second time was a charm.

When they went back in the ring for the group judging, the FG was QUITE fascinated with the tail of the Belgian Shepherd in front of him.  There COULD have been opportunity for more galloping – but my human kept him in check.  But no big ribbons for him this time.

But while he may not have won any prizes in the conformation ring, he WAS a winner at Meet the Breed yesterday.  It was SUPER busy and my human lost track of how many kisses he gave away.  She should have been charging people.  A few people indicated a genuine interest in the breed – one couple had actually come back from the night before and stopped in again, asking more questions.  And of course, the FG was on his VERY best behavior.  He sat like a prince.  I think it’s false advertising.  They should see him when he goes loco pulling on the leash.  Or my human should have shown pictures of the old carpet that he made into Swiss cheese.  Anyway, he reportedly was really good.  And people really liked him.  He had his own fanclub – including at least two people who came to meet the “FG.”  Yup – he got to meet MY blog followers!  Lots of people took photos of him.  And my human discovered THE greatest trick to get him to put his ears up for photos.  Instead of making a weird variety of strange noises – which no longer work- she discovered that all she has to do is say “Bye – see you later,” and his ears go RIGHT up.  It worked like a charm EVERY time!  People got some awesome pictures of him!!!

But the best part about he day – from my point of view was the fact that when he got home, Mr. Congeniality slept like someone drugged him.  Peace and quiet.  And no poking at my backside or barking as he dances around me.  It was wonderful.

They are back at it again today.  And he’ll no doubt have more adventures to share.  Tomorrow I’ll let you know EXACTLY what Einstein and I thought about this whole dog show “thing.”

Have a good one.
Peace and paws up.