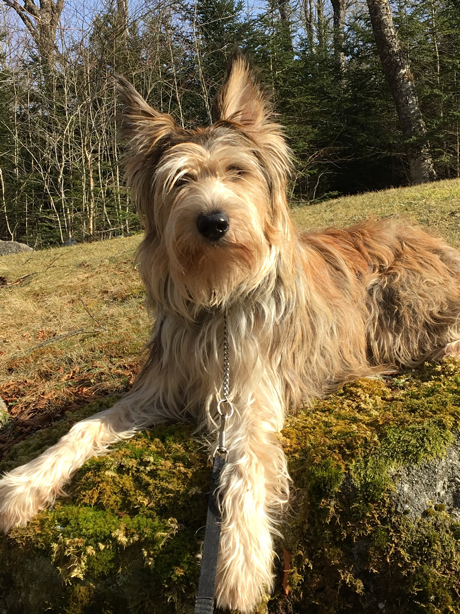 Well I don’t yet have good news to share about Willow, the missing Picard. There have been sightings around the area of the city close to the park and also within the park. But she hasn’t been found yet.  What is challenging is that she just adopted her new owner 2 weeks ago – so has just been getting used to her new home.  She moved here from the US.  Also, someone DID actually catch her at one point but the not-so-bright human removed her collar in order to read the info on her tag.  And you guessed it, she took off again.

Yesterday my human took a day off work, loaded the FG in the vehicle and went hunting.  She figured that MAYBE if they spotted Willow, she might come to Elroy because he is her breed.  And my human knows that some breeds DO seem to recognize their own – so she figured why not? The area Willow was lost is close to two universities and one sighting was in the heart of one of the universities. So that’s where my human and her sidekick started out.  Of course, the FG was initially crazy about being in the city – although the area they were searching is a residential neighbourhood.  But so many sights and smells.  In the first 10 minutes, my human wondered if this was such a good idea after all.  But she continued on, he had a poop, and all was suddenly right with the world.  He now was able to WALK rather than drag her down the street.  The first university student they encountered asked if she could pet him.  Mr. Social showered her in kisses.  She loved him.  The only problem after that encounter was the fact that now the FG thought EVERYONE would want to say hello.  Resulting in some zig zag behaviour by my human to avoid those people who were not looking for kisses (despite the fact that it WAS Valentines Day.)
At one point, a car pulled up and an older woman enquired whether they were searching for the lost dog.  Turns out she was looking too.  My human explained that the FG was the same breed – and the woman thought that was helpful, because now she would know exactly what she was looking for. After about 90 minutes, they had covered quite a bit of territory, but no sightings.  So they went back to the car and drove to the park.  There were lots of people walking dogs, but no Willow.  They walked there for about an hour.  Back to the car they went, and did another  drive around the area.  They were going to head home when they got a text from Willow’s owner saying she had been spotted at the park. So they sped back and met Willow’s human in the parking lot.  Then they all went back into the park again.  But no luck…
When my human got home, she decided to see if she could find any info about lost dog behaviour.  Bottom line – it’s hard to predict much.  An outgoing dog is likely to be found more quickly as it will seek out humans and other dogs.  A more aloof dog, which actually sounds a bit like Willow, may take longer to find because they know how to hide.  BUT they are smart, and will avoid high traffic areas.  You have to be careful though, because you don’t want the dog  to panic and run. My human found the following page with excellent information about lost dogs – and the video is exceptional about how to get a nervous dog to come to you.
https://www.missinganimalresponse.com/lost-dog-behavior/
The FG was exhausted when he got home.  Einstein and I have never seen him so pooped out.  It was lovely – he didn’t bug me all day.
Anyway, send good thoughts that Willow will soon be found.  Heck, one of my sisters took off chasing deer one time and was gone for at least a week.  She returned home stinky and matted, but otherwise fine.  Hopefully Willow’s walkabout will come to a close sooner than that.
Have a good one.  Peace and paws up.
Seizure-free days: 34