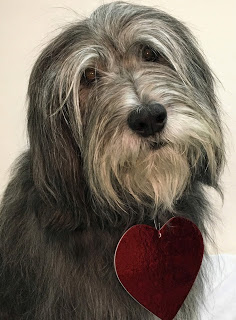 First off, Westminster has come to a close.  We watched the group judging for the final three groups, and here were the results:

And then we watched the grand fianle…..Best in Show.  And the big winner was…the Bichon Frise!   Runner up was the Giant Schnauzer.

So now everybody packs up their crates, their grooming tables, their combs, brushes, dryers, towels, aprons, water bowls, treats, folding chairs and poop bags and heads home.  With THEIR winning dog – because let’s face it, EVERY dog is a winner JUST for getting to compete at the Garden.  Kind of like the Olympics – an honor not afforded to everyone!

In other news – some rather unfortunate news here in Halifax.  Someone has lost a 3 year old Picard girl in a big park in the heart of the city.  My human saw the notice on Facebook on a site called the Lost Dog Network.  It caught my human’s eye because there are very few Picards in the province – but she didn’t know this girl. Willow was lost on Monday – but my human didn’t see the posting until yesterday.  She contacted Willow’s human to see if she was still missing, and unfortunately she was.  My human offered to do a drive around the area where she went missing, after work yesterday.  She got in her car and headed for the area around the park.  She came to a stop sign and out of the corner of her eye, saw a tail behind a tree.  But don’t get excited.  My human immediately stopped the car, went to the back of the car to get a leash and slowly approached the tree.  And from around the tree came a tan colored multi-breed dog – who just stared at her.  “Great” my human thought – “I found the wrong lost dog”. But he seemed to be a dog with a mission and headed down the street. My human asked Willow’s human if they needed posters to be put up or distributed, but apparently they have already done so.  And the original posting has been shared over 900 times.  So HOPEFULLY, Willow will soon be found safe and sound…I’ll keep you posted.

And lastly, today is Valentine’s Day. And of course, time for our annual poem to my human…

Roses are red,
Violets are blue,
You feed us and groom us
And pick up our poo.
You walk us and train us
And buy us new toys,
You spend loads on dog stuff
We’re three lucky boys.
We try to be good
Though we’re often quite bad,
But when you leave us we miss you,
And feel very sad.
While we don’t always listen
And appear not to care,
Wherever you are, if given a choice,
We would rather be there.
Oh human, our human,
We do love you so,
We’re so glad we picked you,
We want you to know!
Hugs and licks from your Valentines!
Frodo, Viktor and Elroy
We hope you like the flowers we sent.  We used your VISA card….
Have a good one!  Peace and paws up!
Seizure- free days: 33