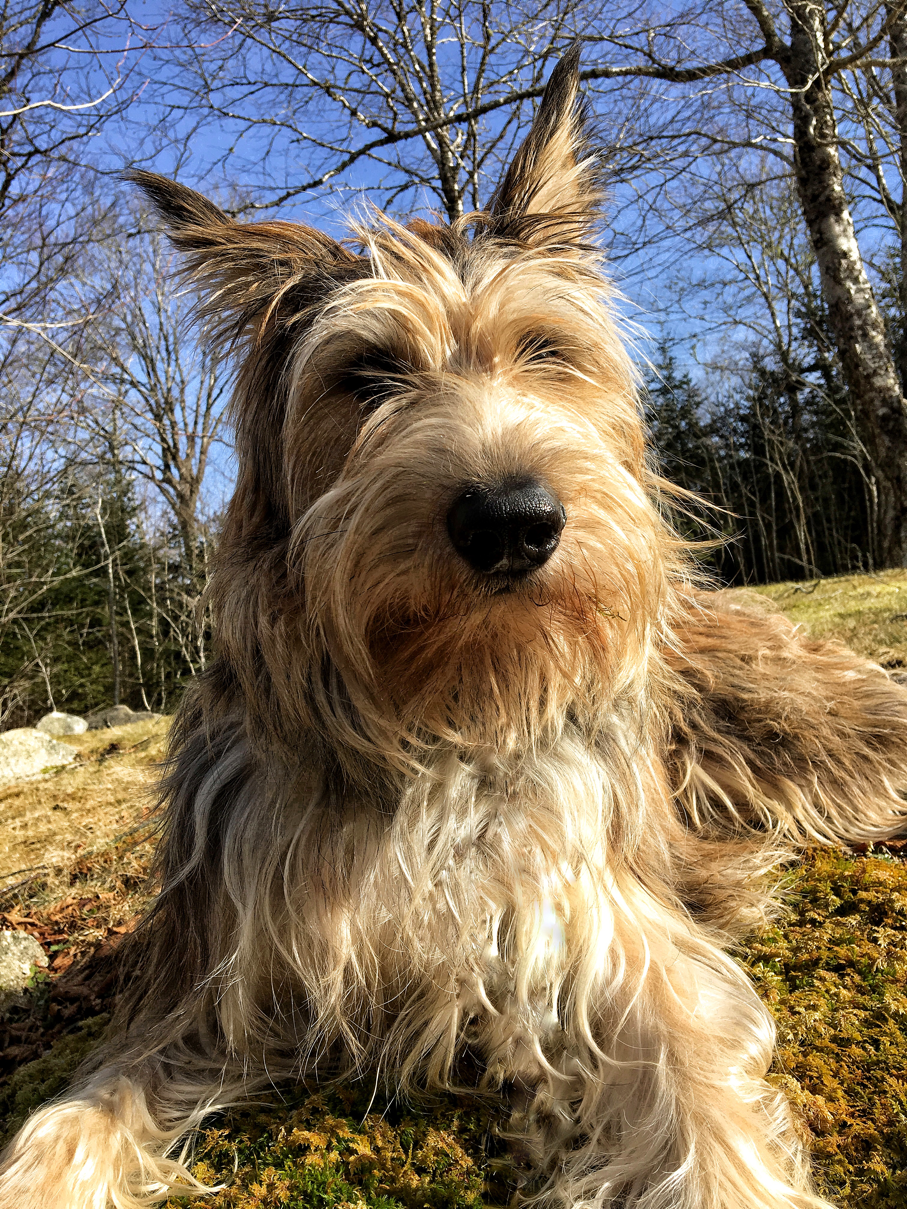 Our weather here in Nova Scotia has been a bit strange this year.  We get some snow. Then we get freezing rain, then rain, then the temperature goes up and melts lots of the snow, but it then drops and leaves an icy coating and then we get snow again which covers the ice…and the process repeats.  As a result, we haven’t been getting our long walks in the morning, because walking on our driveway is a bit of a risk.  You don’t know where you’ll encounter ice while walking in the dark.  Even the LAWN was an icy minefield for a few days.  So the other morning while my human was attempting to keep her balance and still hold onto leashes for two dogs, she was a BIT unhappy when Einstein and I started sniffing MADLY around the house and we were dragging her – or sliding her – from snow mound to snow mound, with our noses STUCK to the ground.  My human wondered just WHAT we could be sniffing.  We haven’t seen any bunnies lately – and the bunnies don’t typically come all that close to the house anyway- so we doubted it was them.  BUT – I wonder if the mystery was solved the night before last when my human got a frantic text from one of the neighbors.  The neighbor texted to warn that there was a coyote in a yard on our road. It was around 8 in the evening.

We know that there are coyotes around – we’ve certainly heard them from a distance.  But no one had seen any on the road – at least not for a LONG time.

Now if you live in coyote country, there are tips to protect your dogs from altercations.  In our case, given our size, it is not as likely that a coyote would attack us – although they COULD view us as competition.  So one never knows.  Smaller dogs and certainly cats, though, are really at a much greater risk.  My human is always with us on walks, and as a rule, coyotes will generally avoid humans. But if one does encounter a coyote, one should try to look as big as possible.  Humans should stand tall and maintain eye contact.  Do NOT run away.  In fact, experts suggest that you should try to scare the coyote away by yelling, stomping your feet and even throwing rocks or sticks near the coyote.  But there is a caution with this behavior… If the time of year is between August and January – that’s when you scare a coyote.  HOWEVER, if it is between February and July – when coyotes may have pups and you MAY be near their den, by trying to scare them, you may actually agitate them and they MAY act out to protect their den.  In this case, you just stand tall, and walk calmly away, watching the coyote at all times.

If you know there are coyotes in your area, be sure to NOT leave dog or cat food outdoors.  Make sure access to compost is secure. Even cleaning up our poop is suggested, as coyotes could be attracted to it. Guess they are into recycling like me.

Coyotes are becoming more and more of a nuisance in recent years – and there is even evidence of “urban coyotes” in places like NewYork City’s Central Park.  They are becoming used to humans, which can result in more and more encounters.  Honestly, if given the choice between encountering a bear or a coyote, I think I’d pick the bear.  At least the bears we have around here – which are black bears – and who typically run when they see humans.  Now grizzlies and polar bears (which we don’t have) are another story…Coyotes, to me are scarier than black bears and I REALLY would not want to face more than one…

So we’ll be making lots of noise when we go out after dark and my human will actually start carrying a walking stick.  Just for good measure.  That is, when the ice melts…Wonder how those coyotes are managing on the ice…