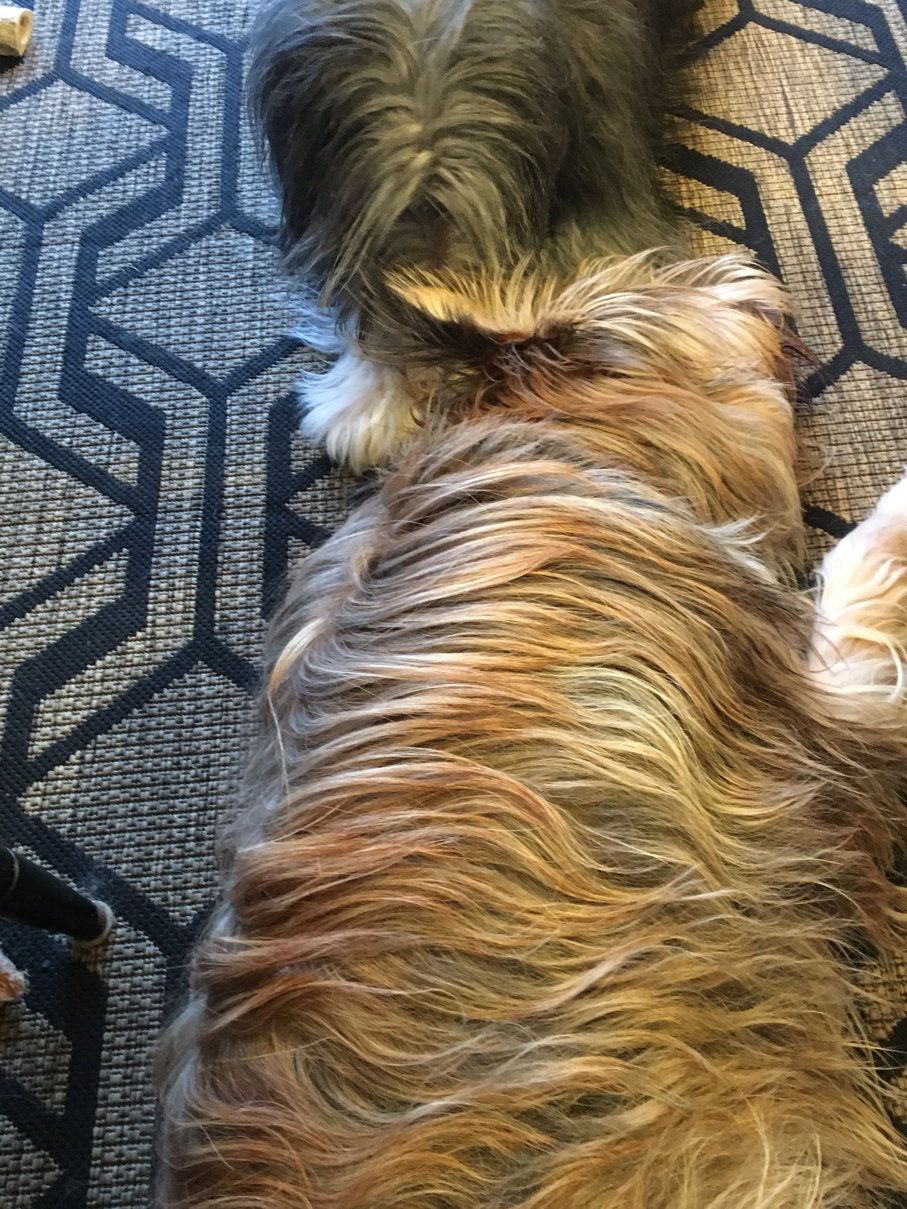 Spring must be in the air -although the temperatures are still below freezing.  I’m wondering about spring though, because the FG is suddenly in love.  REALLY in love.  With me.  I have NO idea why he has become fixated on me.  I mean it’s not like I play with him or anything. Now I AM very tolerant of him. But this squeaking and staring thing is a BIT much.  In the photo – you see him trying to basically lie on top of the bone that I am chewing on, in an effort to get my attention.  It’s WEIRD.  And it can happen at ANY time of the day or night…

My human has attempted to return to sleeping in her bed.  Einstein and I were thrilled because her bed is pretty comfy.  But the FG STILL cannot settle down. So she came up with a new plan.  Instead of putting him in his crate, or blocking him out of the bedroom completely, she put up a gate in between the bedroom and the master bathroom.  Which leaves about a 3×6 foot area where she can sequester the FG.  So he is “technically” in the bedroom, but not jumping on and off the bed.  The first night it worked perfectly.  Then the night before last, he wanted to go out to pee at about 2AM.  Fine.  But when my human put him back in  his “room” he would NOT stop squeaking.  And he was squeaking at me.  She finally had to put him in his crate.  And he was silent after that.

Latley, he bounces around me, doing a play bow.  And then he starts barking at me.  He ALSO likes to sniff me and push me with his nose.  My human thinks that the only reason I haven’t clobbered him yet is because my medications make me more mellow.  I must confess, he does try the same routine with Einstein too – but to a lesser extent.  And IF he pushes Einstein too much, Elistein WILL tell him when he has had enough.

My human actually started wondering if he was warning of a seizure.  Thankfully, no he wasn’t. And the behavior continues.  Until she physically moves him away from me – and gives him something to divert his attention.  Like a toy or treat.

I think we need some good weather – so we can get some longer walks.  Maybe that will tire him out more.  To be honest, I think the behavior actually drives my human more crazy than it does me.  Anyway -maybe it’s just because spring is in the air.  Maybe he knows the groundhog…

Have a  good one.  Peace and paws up!