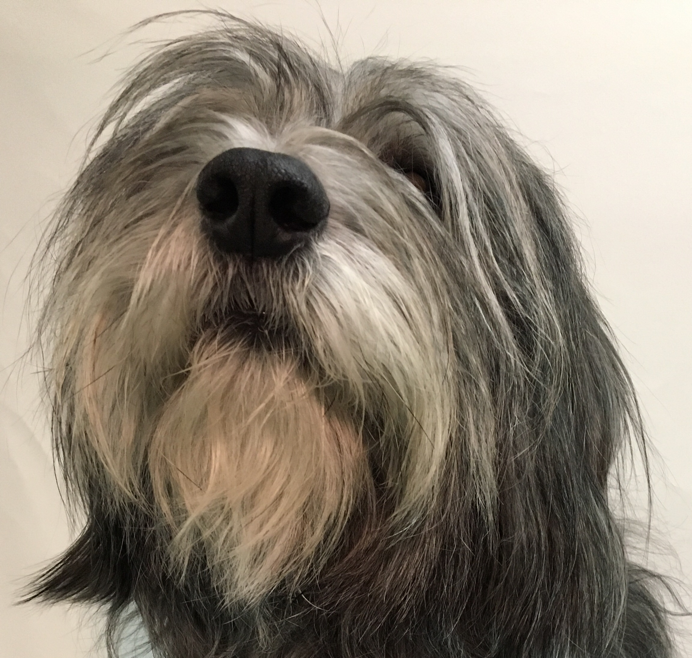 According to my survey, it appears that slightly more than 50% of dogs have the ability to treeverse.   Which is better than the stats in this house.  Someone suggested that the skill can be trained easily with a clicker.  We’ll have to give it a try.  Thanks to all who responded!

And speaking of training, the FG is still not catching anything. Neither toys nor cheese popcorn – and  certainly not the cornflakes.   The whistle thing IS getting better.  But far from reliable enough to be tested outdoors.   Training is hard work.  We DO remain good at countersurfing though.  In fact, I am starting to like the FG more and more – partly because he has better reach than I do.  The other day, my human took him out first for his walk.  And then she took Einstein and me next.  And when we walked in the door, she discovered that a multi-page flyer that had come in the mail was now multi-piece confetti.  And she said the breath-wasting statement: “what did you do?”  At which point the FG walked away, wagging his tail.

My human was again sleeping on the sofa the past few days.  And it had nothing to do with the FG.  After his unsuccessful attempts to sleep free in the bedroom,  she was allowing just me and Einstein in, while he was sleeping on the dog bed in the other room.  But unfortunatley, my comfy sleeping arrangements didn’t last long.  As I did once before, I jumped off the bed while I was half alseep, and awoke the next morning – limping on one of my front legs.   So for the next couple of nights my human slept back on the sofa – because she didn’t want me jumping on and off the bed.  So why not simply block the door – and leave us with the FG?  Because Einstein won’t let her.  He stands at the bedroom door and barks.  And barks.  To be let in.  So the only option was to go BACK to the sofa – because for some odd reason he doesn’t bark at her in the DFZ.  He’ll stare – and look longingly at her, but he doesn’t bark.  Have I ever mentioned how very well trained we have her?

Today is Saturday.  Have to get my human up early – no point in wasting the day.

Have a  good one!  Peace and paws up!