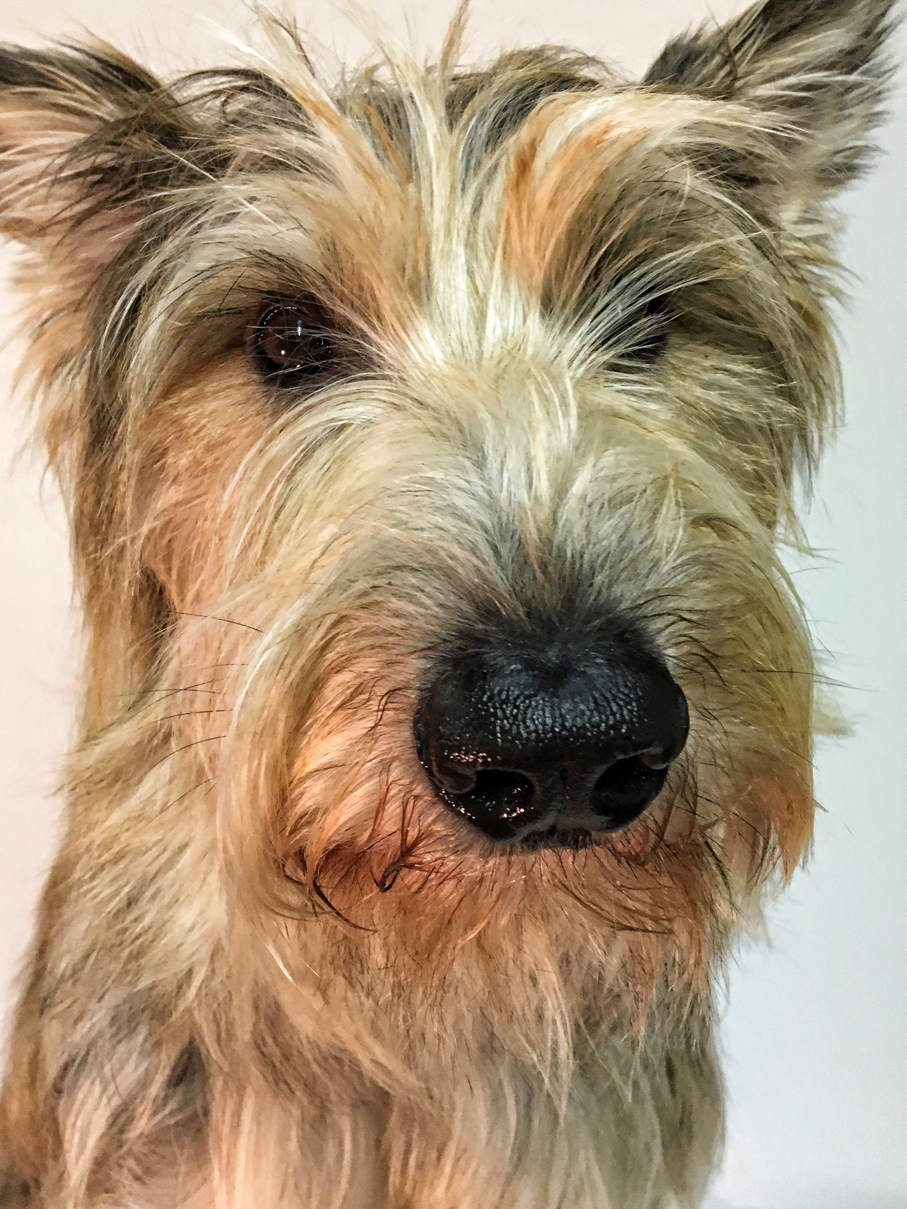 Wow.  Thank you for all of the good wishes and healing thoughts!  We were overwhelmed with all of the comments and feedback an d the sharing of stories. I had a good night after the day of drama.  Well – I did anyway.  My human probably got like 15 minutes of sleep.  Every time I MOVED she would wake up.  I started my new medication yesterday – so we’ll see what happens.  The person I feel most sorry for is our vet…My human sent her SO many articles and literature. At 3 in the morning.  I’m SURE the vet is ready to scream “enough.”  But she doesn’t know my human – the Queen of Google Research.  Heaven help my vet.

I think that in order to keep you abreast of my progress – I am going to put a little counter at the end of my blog.  Kind of a score card – indicating seizure-free days.  Let’s hope I can have LOTS.

So now on to some comic relief.  And who provides the best comic relief much of the time?  The FG…

My human got this “idea” the other day.  She decided it was time she start training the FG to catch.  You see, she hopes to show him in beauty pageants this year.  And last year, a professional handler (the people who get paid to show other people’s dogs) asked my human if the FG could catch things.  Because apparently, one way to get a dog to have ears up and look all attentive in the ring is to teach him to catch a treat.  The dog looks at the treat and gets ready to catch it.  My human said she hadn’t tried it with him, but she would.

So the other day she sat the FG down in the kitchen and told him they were going to do some “training.”  He looked at her like she was speaking Greek.  Which she might as well have done because his reaction to most things she requests is pretty much hit or miss.  She put Einstein and I in the hallway – as she knew that there was NO way the three of us could do this at the same time.  So.  First step.  What to catch?  She figured kibble might work, but given that the Picky Picard sometimes doesn’t even CARE about kibble, she didn’t think that would work.  ALSO – I should note, that the Queen of Google Research had actually not bothered to look up how to do this.

She decided that maybe she should try something “light” in weight that would fall more slowly.  (Sometimes you just have to wonder about her logic.)  So given this premise, what to use?  Marshmallows are light.  But clearly not good for dogs.  And we didn’t have any in the house anyway.  Treats?  Too heavy.  Ahh – the solution.  Cornflakes.  Seriously, I couldn’t make this stuff up.  So she got out the box of cereal and poured a pile on the counter.  She then proceeded to pick out the largest flakes.  Stop laughing.  This really happened.  She fed one to the Picky Picard.  Who immediatley dropped it and had to examine it on the floor.  After about 8 cornflakes, he decided he liked them.  So now he was watching her hand.  And here is where she messed up.  Instead of getting him revved up to catch the treat, she just tossed it up in the air, thinking he would grab for it.  It landed on his head.  He sat there staring at her with the cornflake on his head.  She took it off and gave it to him.  She tossed another one.  He made NO attempt to catch it.  It landed on his muzzle.  This time he flipped it off and scooped it off the floor.  Try again.  Cornflake again on the nose.  And he sat with it there.  She ALMOST grabbed her camera – but he flipped it up and again scooped it off the floor. And so the process was repeated. Again. And again.  By now he was getting annoyed with cornflakes landing on his head and nose.  And he became more intent on cleaning up the tiny crumbs from the cornflakes on the floor.  After about 12 futile noggin landing attempts, she quit.  She THEN looked up a YouTube video on how to actually train this trick.  And she discovered that the dog has to WANT the treat really badly.  And you have to grab it if it drops on the floor before the dog eats it.  So he’ll be really interested in it.  And you also try to toss it into the dog’s mouth.

So it’s back to the cereal drawing board.  Now this is training is going to be interesting.  I suggest she  keep her camera handy.  Just in case.

2 thoughts on “Comic relief. Or is it cornflake relief…”